Drum & bass wasn't designed for human drummers but has still attracted the attention of a few die-hard technicians whose superhuman dexterity is surpassed only by their lung capacity. Such a drummer is Kevin (aka KJ) Sawka, whose Damascene conversion to drum & bass followed years of playing rock, and this new library in Loopmasters' Artist Series showcases what he can do. 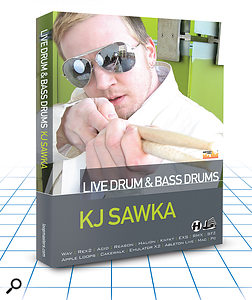 Using seven hybrid acoustic/electronic kits, he created over 500 loops, covering tempos from a sedate 120bpm to a buttock‑clenchingly swift 200bpm. These loops have the kit name, tempo and a short description in the file name, and are organised into Dry and Effected folders, and subsequently into more than a dozen stylistic/musical subfolders. A further 100 single‑hit samples from the acoustic kit elements are also named to link them to their 'home' kit. Given the comparatively small library size (about 625MB of WAVs), this is a reasonable structure, and further usability is guaranteed by the usual multi‑format Loopmasters package.

On first listen, I was mesmerised (how the hell can a single person do all that?!), and I remained no less impressed once the novelty had worn off. In terms of sheer musicality, KJ has taken a clear step above what's available from most programmed libraries. Not only do these loops groove like a vinyl lathe, but they draw out of drum & bass immense possibilities for rhythmic complexity and innovation; a subset of invention that has the unmistakable humanity of a living, breathing musician. Even on the few straight‑down‑the‑line drum & bass patterns, he manages to give the potential clichés an urgency and flow that could take weeks to achieve through programming. Happily, while KJ's drumming doesn't want for complexity, he rarely lets it get in the way of the overall flow. Some of the loops feature solo instrumental riffs and fills, and these warrant special praise for the way the human really steals a march on the machines — a refreshing change.

But what of the sounds? Again, KJ scores well, with a good balance of hi‑fi and lo‑fi elements. Kicks roll and rumble where they should, but are also by turns tighter and higher for faster, more detailed patterns. The snares pop and rasp in a solid, usable way and there's splendid virtuoso use of rolls. Cymbals and hi‑hats aren't exactly good in beard‑stroking hi‑fi terms, but right on the money as far as general attitude is concerned.

Despite the live drumming, there's also plenty that sounds programmed — electronic blurps and glitches, reverse swells, abrupt cutoffs. What's great about these, though, is that they seem to grow naturally out of the more acoustic sounds and are integrated intelligently into the performance.

If I've not made it clear enough yet, this is a great library, and something of a rarity in the field of electronica in demonstrating how real musicianship can survive even the most stratospheric of tempos. Mike Senior