If you thought the Pocket Pod was a no‑brainer spin‑off from the successful Line 6 Pod line, you should take a look at the Pocket Pod Express. Its squashed‑kidney plastic case has just four knobs and, although its patches can't be edited, it still provides five basic amp models (Clean, Twang, Crunch, Rock and Metal) that can be augmented with either delay or reverb, and a choice of chorus, tremolo or flanging. It has the expected input and output jacks for your guitar and amp, but unlike the Pod from which it takes its technology, they're only in mono. However, you do get a 3.5mm stereo input jack, so that you can jam along to your MP3 player, and a 3.5mm phones jack. There's also a socket for an optional 9V DC power adaptor, should you want to use one — but you can also run the Pocket Pod Express on four AAA batteries, a set of which is included to get you started. 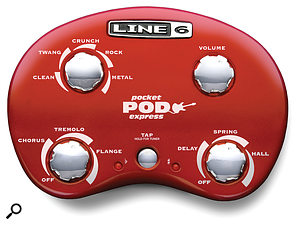 The picture tells you pretty much all you need to know about the layout, and shows the Line 6 Spider‑style control arrangement, with the three model‑knobs divided into segments. Putting the knob anywhere in a segment selects the effect that's depicted by the panel legend, and moving towards the clockwise end of the segment increases the amp drive or intensifies the effect. The fourth knob is a volume control, but sadly there's no tone control — the only big omission that I noticed. Apparently, the amp models are 'inspired by' the Fender Deluxe Reverb, the Marshall JCM800, the Vox AC30 Top Boost, the Mesa/Boogie Dual Rectifier, and the Fender Twin Reverb. I suspect the Crunch model is Vox AC30‑inspired, and it certainly has a nice jangly edge to it.

You get a choice of spring or hall reverb, or delay. A 'tap' button is used to set the delay rate, but if you hold it down, you'll select the built‑in tuner, which uses a simple two‑LED system to show sharp or flat for each note. When both lights are on, the note is in tune. The tuner assumes standard tuning, and it directs you towards the nearest 'open string' note — so, unless you're miles out, it works fine. If both lights flash when you're not in tuner mode, you're being told that the batteries are about to die: something to watch out for! An included belt clip lets you fix the Pocket Pod Express to your belt or guitar strap, but this can be removed if you prefer.

The tone comes across as being very similar to the company's little Spider amps and, despite its simplicity, the quality of the sounds is actually very good. I'd have liked a slightly longer spring-reverb decay time but that's a minor point. This product is clearly aimed at the home-practice and entry‑level recording markets, but at under $100 it also provides a great safety net against amp failure during a gig: keep your Pocket Pod Express in your guitar case and, if things go bad, you'll always be able to plug it into the PA (via its speaker‑emulated phones output), or plug the amp output into a spare channel of your mate's amp to get you through the rest of the night. It also makes a useful front end to a guitar amp that has limited features — and because there's nothing to program, you can easily set up a sound in seconds. In short, this is amp modelling at its simplest, and is cheaper than buying a plug‑in to do the same job: the sounds are Pod quality but with less choice and controllability. A great little impulse buy that has no real competition in its price range. Paul White

A simple, inexpensive and good-sounding guitar preamp for practice, recording or even gigging.