The inaugural product from Imperfect Samples is a sampled piano with a difference... 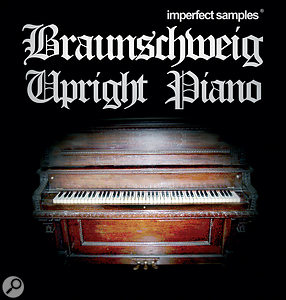 I was a bit perplexed when I first heard about the Braunschweig Upright Piano. Is there really a demand for more piano libraries out there? Is an upright piano instrument what every composer and producer is clamouring for? Aren't there already several well‑received upright piano libraries on the market? I decided to stop being a naysayer and check out the product description on Imperfect Sample's web site.

The concept behind the Braunschweig piano (the Braun from here on out) is to offer an alternative to pristine, polished piano libraries by injecting some real‑world artifacts and idiosyncrasies. Additionally, the piano is sampled from slightly unfashionable microphone positions, achieving even more esoteric results. Interspersed throughout the instrument are subtle quirks, such as finger‑on‑ivory taps (yes, the actual sound of a fingernail clicking on an ivory key), pedal noise and other 'flaws' that one would conventionally wish to eliminate from a recording or performance. But if we consider possible intentions for a sample library such as this, several applications come to mind, and I'll get to those in just a minute.

Currently, the Braun is only available via Imperfect Samples' web site. After purchase you're emailed a link to download the files. Then, after uncompressing the hefty files, you have both the EXS24 instruments and the Kontakt versions (SFZ and other formats are in the works) and all the sound files required. It should be noted that you're buying the libraries without a sample player, so you must own a soft sampler capable of playing back EXS24 instruments or Kontakt 2.2 or later.

The 24‑bit library itself consists of one piano in several incarnations. The standard version (5GB) is the Braun Upright sampled from one mic perspective (two inches from the soundboard) using up to eight velocity layers. Or you can spring for the pro version (15GB!) which includes the aforementioned piano with up to 14 layer, as well as another group of samples from a second mic perspective (near the hammers) in up to 11 layers. The folks at Imperfect Samples recommend using Redmatica's EXS manager to re‑link the samples and help speed up load times but without it, the pianos loaded on my Mac quad‑core in about 15 seconds. Even with ever-swelling hard drive sizes (and I'm sure this point will seem silly in two years' time), I found myself asking: doesn't 15 Gigabytes seem large for a library that's one instrument and meant to be kind of lo‑fi?

Initially, having the choice of how many layers to load seemed overwhelming but as I employed the piano on projects, I started to understand the value of these options. For instance, if you're working on a project that calls out for the Braun but your session is pretty dense with software instruments and plug‑in effects, you can record the three‑layer version first and then, when you're ready to mix, switch it to the instrument with the next-highest number of layers. If all is well, continue adding layers until your system starts to beg for mercy.

A Fistful Of Keys

So now that we have the gist of what this instrument is about, let's start tickling the ivories. The first image that comes to mind when I think of uprights is ragtime, so 'Maple Leaf Rag', here I come. Well, no. Not withstanding the upright piano's ubiquity in the saloons of the cinema, this is neither a tack piano nor a honky‑tonk tuned piano. It's simply an upright piano. The strings may be a bit shorter than its grand cousin but there is no inherent sound effect from this piano. The effect comes from how it was sampled.

To get things started, I loaded the 10‑layer, 'first perspective' instrument and started playing through my repertoire. The first thing I noticed was its ambient sustain. Whole‑note chords have a lot of character, colour and capability. Soft notes have a dreamy, far‑away quality, while harder strikes bring your attention back to earth. When cycling through chords in this way I found the Braun inspiring — I do a lot of music for film and TV, and I could definitely use this in a quiet, evocative, peaceful sort of cue.

The other application at which the Braun excels is creepy, menacing, suspenseful passages. Just grabbing four random notes in the upper register would give you a starting point for a horror movie scene.

What about the 'second mic perspective' instruments, then? These have a warmer sound and work well on soft passages. They have less ambience and faster decay than the first-perspective versions. While this version is softer, it also has more presence as you play it harder. It still has a distant vibe to it — although less dreamy than the first perspective — and works well in the same types of application.

Refreshingly, from either perspective, the Braun seems to sit well in a mix without needing much tweaking. As much as I am a fan of alliteration, big, bold and beautiful pianos usually need to be sonically sculpted to fit into final mixes. I, personally, would not run to the Braun for all styles of music, but the demos on Imperfect Samples' web site do illustrate a fair amount of versatility.

Is the Braun going to be your go‑to piano? Probably not, and I suspect that the team at Imperfect Samples would probably agree. Does the Braun deserve a place in the modern composer/producer's arsenal of instruments? For sure. It's priced well for what you get, it's very straightforward, and it is untouchable in the situations at which it excels (namely, in my opinion, ethereal, horror, creepy, suspenseful, antique moods). I would start with the standard version, and if you feel that you need the extra layers and the second perspective, take advantage of the company's offer to upgrade to the Pro version.

In a perfect world, I think more companies would offer products like the Braunschweig Upright Piano. Unfortunately, we live in an imperfect world, but I'm sure that suits Imperfect Samples perfectly.