The LT-HD card connects via Digilink cables to Avid's HD Core, Accel Core, HDX or Native cards, thus allowing it to replace any Avid interface on any HD system from the old HD TDM systems to current HD Native, HD Native Thunderbolt and HDX systems. There are two modes of emulation, the first being a 32-channel mode that mimics two instances of the Avid HD I/O 8x8x8 inteface, and the second a 16-channel mode, emulating one instance of the analogue 16x16 interface. 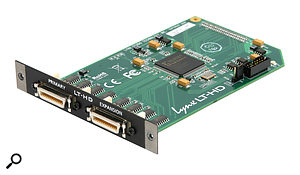 For current systems, you'll need an adapter cable, because the LT-HD card uses the connectors employed by the HD TDM systems, rather than the newer mini connectors found on HD Native and HDX systems. Also, there are a number of different adapters.

What you need if, like me, you have an HDX system is a DigiLink male to Digilink Mini female adapter. Once I had this, I plugged the Aurora 8 converter, which had been supplied for review with the LT-HD card, in to my HDX system. Lynx state in the manual that the Aurora must provide the clock master signal, with the Avid interface slaved to it, but this just requires one BNC lead from the Aurora Word Clock Out into the Loop Sync In on the Avid interface. In Pro Tools' Hardware Setup window, I selected the Aurora (HD I/O 2) as my Clock Source and everything was recognised instantly, with none of the trashing of DigiSetup preferences I'd anticipated. Pro Tools recognised the Aurora converter and controlled all input and output functions, clocking, routing and other settings just as if it was an Avid interface. I also noticed that the LT-HD has the same signal latency as the Avid converter, and this, thankfully, means that it causes no issues with Pro Tools' automatic delay compensation. In other words, this is the first third-party interface I have used that just works as if it was an Avid interface.

In a nutshell, then, using the Lynx Aurora 8 with their LT-HD card gives you the same I/O complement as you'd find on an Avid HD I/O 8x8x8 system, but use an Aurora 16 with the same card, and you'll have access to 16 great-sounding analogue and 16 digital channels — so 32 channels of I/O in total — in a single 1U box. Having 32 channels available to Pro Tools HD systems in this 1U form factor is a very appealing prospect indeed, but even the Aurora 8 I used during tests provides the same amount of I/O as my 2U eight-channel Avid hardware. As for the sound, I recorded and played back a selection of material, and the subjective sound quality was incredibly similar to that of my 8x8x8 — which itself sounds rather better than my previous HD192 interface.

Your Questions Answered
1 week 22 hours ago.