Dot Bustelo has spent over a decade working as a product specialist and demonstrator for Apple's Logic Pro DAW software. Her book, Logic Pro For Recording Engineers & Producers is written for the benefit of those who may not yet be familiar with Logic Pro, but who already know through experience of other products what a modern DAW can be expected to do. Throughout the book, there are references to the way Avid's Pro Tools does things and how the equivalent can be achieved in Logic Pro. Although the book is aimed primarily at those DAW users wishing to add Logic operation to their repertoire, it also includes a fair number of hints and tips that existing Logic users will find useful, and which even long-term users may not yet have discovered. Complete newcomers should also find that it helps them get up and running quickly. 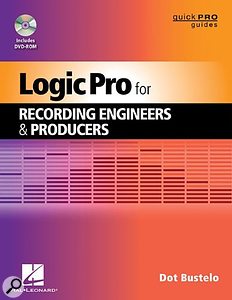 This book is part of Hal Leonard's Quick Pro Guides series, and follows a logical progression starting out with the practicalities of setting up an interface, configuring the preferences, sync issues, the use of 'folders' and using Rewire. Then, it's on to recording, complete with a tour of the Arrange page. After recording we get to editing, which includes Logic's Quick Swipe Comp mode for compiling multiple takes. More advanced processing such as Flex Time, destructive audio manipulation, audio quantization, drum replacement, beat mapping and transient editing are also covered.

Mixing follows, with a tour of Logic's mixer including routing, grouping, setting up sends, surround mixing and the insertion of plug-ins. All aspects of Logic's automation are covered and Logic's more important plug-ins are investigated in greater detail. The book rounds off with using markers, bouncing your mixes, managing your projects and audio files, exporting files and a little basic troubleshooting.

The included DVD ROM takes us through basic playback and zooming moves, key-command assignments, hiding tracks, using the waveform ('Sample') editor and beat mapping. It also covers channel-strip settings and the key features of the mixer, before finishing off with a number of power-user tips. All the sections appear as separate M4V format video clips, and essentially take the form of screen-grab movies, with Dot's voice-over explaining what's going on.

Overall, the book achieves its aim of covering the key points of Logic Pro's operation in a sensible order, and it does so as concisely as is decent. Indeed, it's much shorter than the Logic manual, but it still tells you the majority of what you need to know to become proficient with the program. I wish this had been around when I first encountered Logic!