Anyone with a keen interest in the hey-day of the British music recording industry, from, say, the late 1950s through to the mid 1970s will probably already be familiar with some of Howard Massey’s books, such as Behind The Glass volumes I and II, and Here, There, And Everywhere (a Geoff Emerick biography). Those worthy tomes focus on some of the people involved, but his latest offering, The Great British Recording Studios (Hal Leonard, ISBN 978-1458421975), focuses mainly on the places — it’s a fascinating and commendably detailed book, which provides a wonderful overview of the significant recording studios in London in the ’60s and ’70s, as well as a few noteworthy facilities elsewhere in the UK. Most of these facilities are now long-gone, of course, but Massey has tracked down (with the cooperation of the APRS) many of the managers, maintenance engineers, and recording engineers who built and worked in them, to get their first-hand histories, recollections, stories and trivia. 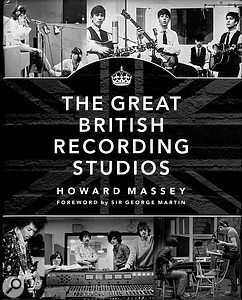 The introductory chapter discusses the nature of the ‘British sound’ and some of the possible reasons for the distinct character attributed to recordings made in the UK’s leading studios, in comparison with those of the USA. Not surprisingly, the first major studio to be examined in the book is EMI’s Abbey Road, with the text, illustrations and period photographs covering the basic layout and dimensions of the three studios, their acoustic environments and treatments, and the available facilities including echo chambers, mixing consoles, monitors, tape machines, microphones, outboard equipment, and so on. There are also sections on the key personnel involved, as well as a brief discography of some of the major recordings created at the studios, and any significant industry innovations — for this was a time of countless ground-breaking developments in the recording industry. For example, did you know the DI-box concept was invented at Abbey Road?

An identical approach is taken with all other studios described in the book, with Decca’s London studios covered with equal thoroughness in the next chapter, along with the Philips and Pye studios that played an important role in those early days but have largely been forgotten today. Chapter three investigates the leading independent studios of the time, starting with IBC — another largely forgotten facility located near the BBC’s Broadcasting House, whose pioneering introduction of a structured training scheme fashioned so many of the engineers and producers that went on to shape the British music scene. Other notable independent studios described in great detail here include Lansdowne, Advision, and CTS, while Joe Meek’s privately owned studio in Holloway Road — it was the first of its kind in the UK — benefits from a chapter of its own.

Concluding the book is a fascinating chapter on ‘Mobiles’, which became a very popular recording solution, particularly throughout the ’70s, allowing artists to record wherever they liked for the first time. The innovative and custom-designed trucks of the Rolling Stones, Manor, Island, RAK, and several more are, again, described in detail with many intriguing photographs.

There is nothing else on the market that covers the UK’s historic recording studios in the depth and breadth Massey has managed here, and his meticulously researched book is very timely: we are now starting to lose so many of the great artists, engineers, and producers who lived and worked through the most pioneering and influential period in the UK’s recording industry. It seems churlish to nit-pick such an exceptional and unique book, but if pressed I would have liked the engineers/producers in many of the pictures to have been identified. It would also have been nice to have included details of some of the early artist-owned studios, like Strawberry (10cc), Eel Pie (Pete Townshend), Britannia Row (Pink Floyd), and so on, all of which appeared throughout the `70s in the wake of the Beatles´ own Apple studios and the Who's Ramport studios, (both of which are included).

I have thoroughly enjoyed reading this book, and I’m sure it will be something to which I refer often in the future. I found it fascinating, inspiring, surprising, nostalgic, informative, eye-opening, and amusing, all at the same time. I learned a great deal along the way, and I reminisced over studios that I once knew (if only superficially in many cases) which have now gone. This is an absolute must-read for any student or enthusiast of British recording history and technology. Very highly recommended.