Maggot Software's clever utility allows Pro Tools users to select a Region and instantly swap the audio it contains with another take. 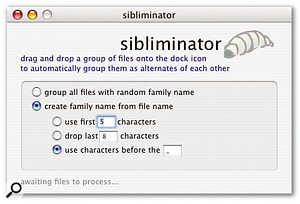 The Sibliminator utility is a new Mac-only program from New Zealand-based company Maggot Software, which harnesses the 'field recorder' functionality recently added to Pro Tools in version 7.3 and applies to any group of Broadcast WAV files you choose. The point of this is that with Sibliminator installed, you can right-click on any Region in the Pro Tools Edit window and instantly swap its contents with another piece of audio. This has obvious benefits for anyone doing ADR (Automated Dialogue Replacement) or comping a part from multiple takes.

When you select an audio Region in the Edit window and right-click on it, Pro Tools 7.3 finds all the files of that 'family' (ie. files which have the same timecode In and Out points) and makes them available for swapping. For Pro Tools to think that a group of files are 'alternates' of each other, the files must have overlapping timecodes, as well as having one other metadata feature in common. This functionality is only supported with Broadcast WAV files (BWF WAVs) and doesn't work on SDII or AIFF files, as they don't have the appropriate metadata fields. 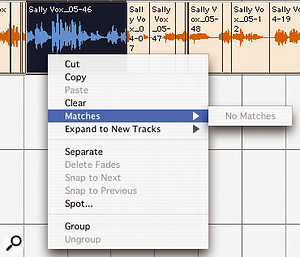 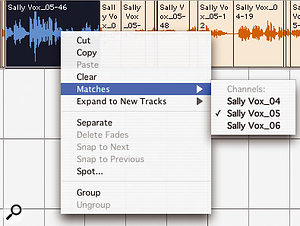 Before and after: by default, Pro Tools finds no alternate takes for this Region (above). Sibliminator forces it to see all the other takes that cover the same timecode range as alternates (below).

What Sibliminator does is add metadata to existing files to make Pro Tools 'believe' that they are alternate channels of the same recording. Specifically, it adds or rewrites the Tape name in the description field of the BWF text chunk. You can choose to have it either add a randomly generated Tape name, or it can extract a Tape name from the name of each file. If you need the original BWF Tape information for some other purpose, you may want to think about this before processing any files, but this will only tend to apply to those users who are handling material from actual field recorders and need to use the Tape name to keep track of the source material. Note that Sibliminator doesn't modify the file size or the unique ID of any file, but does affect the modification date.

What's In A Filename?

Sibliminator has a simple range of settings whose sole purpose is to determine what will be used to create the Tape name for the group of files. The random 'family' name option is useful when you have no strict naming convention and you already know which files are 'alternates' of each other. It's fine for a 'quickie' when you're processing a small group of files and don't need to think about the naming of them. However, the drawback of using this technique is that you can only process your files one group at a time.

The filename-based options work well if you have a consistent naming convention, and give you the opportunity to batch-process many files, letting the filenames sort out which files will be alternates of each other. For example, let's suppose you have a number of vocal takes named 'VoxSal414_xx.wav' (the 'xx' being the number of each take), which represent a set of takes of a lead vocal for a song made using an AKG C414 mic, along with another set called 'VoxSalU87_xx.wav', which represent a set of takes made using a Neumann U87 mic. If you set the Tape name to 'VoxSal' by using the 'use first ... characters' option and enter '6' in the numeric field, you would then be able to interchange any take from both the 414 and U87 sets, because the first six characters of all the filenames are the same. Alternatively, you could choose the 'use characters before the...' option and enter an underscore in the text field. If you applied this to all the vocal takes, you would then have one set of C414 takes and another set of U87 takes, which would be interchangeable only with other C414 or U87 takes respectively.

I tried Sibliminator out on a Session which had a vocal track with six takes in total. These consisted of three complete passes, called 'Sally Vox_04' to 'Sally Vox_06', and three passes that were only the end of the track, called 'Sally Vox_01' to 'Sally Vox_03'. Even though each set started at the same point on the timeline, by default, right-clicking on them in Pro Tools showed either no matches or, at most, one. 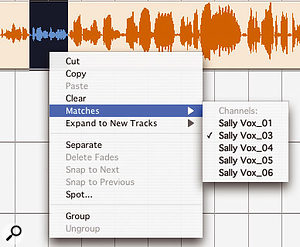 You don't even need to Separate your selection as a Region to swap its contents with an alternate take.Once you've decided whether you want to use random or filename-based 'family' names, you simply drag and drop your files onto the Sibliminator icon in the Dock (not onto the Sibiminator window), then import the files into a Session. If they are already in an existing Session, you need to close and reopen it for Pro Tools to respond to changes.

Now select any Region or part of a Region, right-click on it, and you'll see a list of 'alternate channels' available in that time range. As you can see from the screenshots, once Sibliminator has done its work, the same Regions that originally showed either one match or no matches now offer all the takes in that time range as alternatives. What's more, you're not restricted to simply swapping entire Regions: it works just as well for a highlighted section of a Region. The result is a new and very fast way of comping takes within Pro Tools, which avoids the use of Playlists.

In creating this clever little piece of software, Maggot Software have enhanced a new Pro Tools feature that will be very useful for audio dubbing editors and have also turned it into a stunning feature we can all use to make 'comping' tracks of any kind so much easier.

Sibliminator is an excellent utility that makes Pro Tools 'believe' there are alternative tracks it didn't know existed.