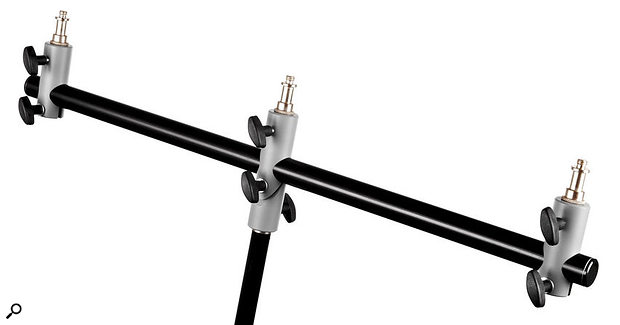 I recently wanted to rig a three-mic stereo array, comprising a SoundField ST-450 mic in the centre with omni outriggers spaced 220mm either side. This is an experimental stereo rig for choirs, organ and orchestral recordings which I’ve developed from a technique established by Ron Streicher (who uses a Decca Tree array with an M-S pair instead of the forward-centre mic), combined with a stereo imaging concept described by Alan Blumlein. The idea is to combine the high-frequency imaging precision of a coincident array with the low-frequency spaciousness and depth associated with spaced omnis. The two mic arrays are combined with a crossover at around 700Hz, based on Blumlein’s ‘Shuffler’ concept.

The very specific omni mic spacing is calculated to achieve the same stereo recording angle as coincident hypercardioids at 90 degrees (so an SRA, or Stereo Recording Angle of about 120 degrees), although in theory the spaced-omni pair introduces more angular distortion of the stereo image than the coincident pair (sources half-left and half-right are portrayed slightly wider than on the coincident pair). Part of my ongoing experimentation with this nascent ‘Robjohns Array’ is to determine the impact on the perception of the stereo imaging overall, and whether the alignment or signal processing can be adjusted to minimise the effect.

When it came to implementing the array, I found that none of my existing mic-mounting hardware was suitable. My DIY Decca Tree mount was far too large, and the widest stereo bar I had (a K&M model 236) was only 360mm wide. So, I found myself searching for a better solution. The first option I considered was a wider K&M bar, and I found the 850mm-wide model 23560, which features three mounting screws on each side moving in slots for flexible mic spacing. Mounting a central mic is also possible given a mic stand with a long enough thread to protrude sufficiently through the stereo bar. This was quite an attractive option, due partly to the attractive price, but the excessive (in this application) width put me off. My next find was the beautifully engineered Grace Design SpaceBar (reviewed in SOS November 2009); the SB-66 model is the perfect width at 660mm. However, mounting a central mic requires an optional ‘Center Mount Bridge’, and the whole thing was going to cost over £600(about $750), which was rather more than I wanted to spend!

As it happens, in an effort to reduce the sheer weight of my location recording equipment, I’ve switched from traditional, heavy, K&M 20811/21411 tall ‘Overhead’ mic stands to Manfrotto’s Photo Master lighting stands. I can’t recommend these ingeniously designed tripod stands highly enough — they are literally half the weight, but 25 percent taller, and just as sturdy. And wondering if Manfrotto might have a lighting support bracket that I could adapt for my mic array, I stumbled across their aptly named ‘Microphone Support SKU154’!

At 650mm this is a similar size to the Grace SpaceBar, and it comes with three fully adjustable mic supports, the centre one including a standmount. Although crafted to “Italy’s world-leading quality standards” there are no etched distance or angle markings as on the Grace, but as this is massively more affordable and I already own a tape-measure, that really doesn’t bother me!

Like most of Manfrotto’s equipment, the Microphone Support attaches to a compatible stand via a 16mm ‘socket’ clamped securely with a large thumbscrew at the base of the centre mount, so a stand with a matching 16mm spigot is required. Each of the three mic attachment points comprises a 16mm socket, and a removable 16mm spigot with a standard 3/8-inch thread at one end. These sockets and the spigots are all secured with more thumbscrews, and this arrangement creates a very convenient quick-release system: the mic supports can be pre-positioned on the bar, and the removable spigots screwed into the mic shockmounts in advance. The pre-rigged mics in their shockmounts can then simply be dropped into the appropriate sockets and secured, literally in seconds. In practice I can turn up at a venue and have the entire mic array rigged easily in about a minute. De-rigging is just as quick, too.

Clearly, this Manfrotto Microphone Support bar requires a compatible Manfrotto stand and can’t easily be fitted onto a traditional mic stand. However, if you seek a lightweight, sturdy and versatile mic support system that doesn’t cost the earth, this has a lot going for it. I have been very pleased with it.