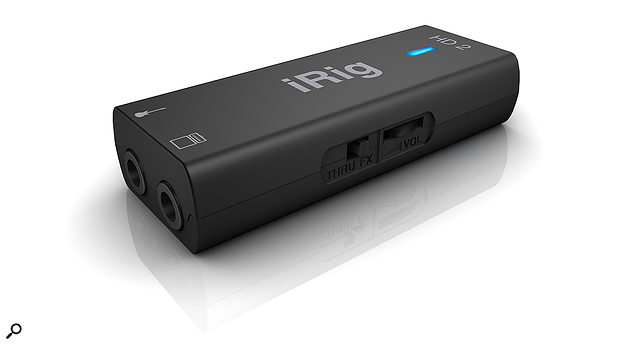 The iRig HD 2 compliments IK’s series of compact audio interfaces designed to record guitar, bass guitar and line-level devices with minimum fuss on an iOS device or computer. Although slightly more expensive than the ‘mk1’ version, the HD 2 improves upon its iRig HD predecessor in a number of ways and also exceeds the specifications of some of its fiercest competitors. This mini interface is capable of recording and playback of qualities up to 96kHz/24-bit.

As a reaction to the removal of the headphone socket on recent iPhone hardware, a headphone preamp with a mini-jack output has been added to the specification and provides a far neater solution than monitoring output signals through the iOS device’s own headphone socket. Furthermore, the interface now has a flexible amplifier jack output function to combine amp simulation and effects on a mobile device/computer with an external amplifier and speaker cabinet. With the toggle switch set to ‘THRU’ the output monitors the original, unprocessed signal at source, and when set to the ‘FX’ position will output the effected signal from IK’s own AmpliTube and the like. The iRig HD 2 comes with Lightning and USB-A connection cables, plus a microphone stand clip, allowing a Velcro strap to fix the unit in position.

Getting things recorded is very straightforward, and setting gain is simple, aided by a basic LED level meter. The included, upgraded version of the free AmpliTube iOS app offers some basic amp models and cabinets, the most widely used effects stompboxes and a fairly low level of latency. As with other IK products, I find the ‘freemium’ model of bundling software quite confusing here: you have to pay for the most useful features within the app. Apple’s own GarageBand is a more versatile partner to the iRig on iOS, providing recording and editing functionality and also more suited to recording unprocessed signals, eg. an acoustic guitar pickup. Using GarageBand, I was able to record acoustic guitar signals with very little noise and a workable level of latency (though seemingly not as low as with AmpliTube). A footswitch jack socket to toggle the THRU and FX modes of the amplifier output would have been a nice inclusion, since such a dual mode is pitched towards live performance opportunities. Perhaps this would be too challenging to engineer and fit into the diminutive case. (IK sell a Bluetooth MIDI foot controller that takes charge of AmpliTube and is almost as much as the cost of the HD 2 itself.)

Output signal to the headphones is sufficiently strong, but unfortunately I experienced some clipping of the headphone amp when using the iRig on multiple versions of iOS and different headphones. Turning the headphone amp down slightly solved the problem, and I didn’t experience the same glitches when using Mac OS desktop applications. Otherwise, the iRig is capable of outputting 24-bit recordings with a clarity that exceeds the onboard sound of the iPad and Mac. On further investigation, this issue seems to have been ironed out with the most recent iOS version at the time of going to press (10.2).

In summary, the iRig HD 2 offers a quick and easy way to capture guitar, bass and line signals on the go. If the price and features work for you, it’s certainly worthy of consideration and can produce some really pleasing results. Just ensure that you have an up-to-date version of the operating system before putting it through its paces!