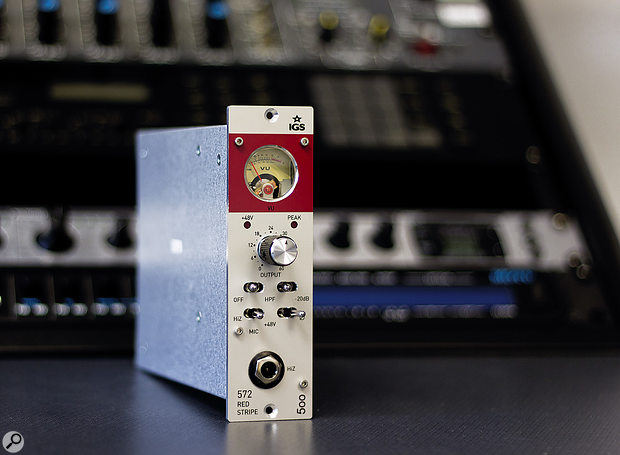 Could this transformer- and valve-laden preamp bring some analogue magic to your recordings?

I’ve reviewed a number pieces of hardware from Polish manufacturers IGS Audio now, and I’ve always enjoyed great results when recording and mixing with their gear, so I was more than happy to put their new 572 Red Stripe valve preamp through its paces, which I did on a number of recent sessions at my studio.

The 572 is single-width 500-series valve preamplifier module, and despite it not being claimed to be a direct clone, one presumes that the ‘72’ is a nod to the legendary Telefunken V72 valve preamp.

On an initial inspection, I was reassured by the sturdy look of the module, and all the switches and knobs had just the right amount of physical resistance to feel right. As there’s not a huge amount of room to play with, the control layout of any 500-series module is crucial for me — some of them can get very fiddly in the middle of a busy session! Thankfully, then, not only have IGS judged this nicely with the 572, but they’ve even managed to accommodate a decent-sized VU meter, and a high-impedance direct input for recording guitars, bass guitars, keyboards and other such instruments.

The 572’s input and output balancing is taken care of by high-quality Sowter and Edcor transformers, and a careful peak inside the module reveals two surprisingly large tubes (JJ ECC803S and ECC81 dual-triodes) for such a tiny enclosure. Perhaps it’s a little geeky of me, but I find that a pleasing sight — it immediately makes you want to plug in a bass guitar or record a vocal track through your favourite mic!

The controls are pretty much what you’d expect to find on any ‘fully formed’ preamp. A rotary switch applies up to 60dB of gain, and there are toggle switches for 48V phantom power, 20dB pad, polarity inversion, and selecting the mic or Hi-Z input. You can also engage a high-pass filter set at 50Hz. I think it’s a sensible frequency for a preamp that will be mostly used for studio recording duties — I like to try and use low-cut filters when tracking if I feel comfortable, but I need to feel very confident to use anything higher than, say, a 75Hz one. 50Hz, with a slope of 6dB per octave, seems a very safe bet to me for things like guitars and vocals. Metering-wise, we have a fully analogue, backlit VU needle meter, and small LED lights to highlight the presence of 48V phantom power and if the signal is beginning to clip.

The first time I got to use the 572 on a session, I was recording a bass guitar, and that’s one of those applications where I’d hope a valve preamp would excel. We were looking for quite a specific, distorted bass sound for the song we were working on, and my original plan was to introduce this effect elsewhere in the recording path with a guitar pedal. But on initially (mistakenly) cranking the preamp gain much too hard, we were all taken with the beautiful valve distortion that the Red Stripe was producing. It was a happy accident then, but we went with it and ended up using this lovely, heavily saturated bass sound on a number of songs!

After this pleasing, if unorthodox, start I tried using the 572 in rather more run-of-the-mill roles, capturing acoustic guitar and vocals. My initial reaction was that of a fairly clean-sounding preamp that ever so slightly pushed the mid-range forward, and curtailed the very low frequencies slightly. First impressions aren’t always right, but they’re very influential, and once I’d formed this impression I found myself preferring the 572 on sources which, like acoustic guitar and vocals, don’t need a capacious bottom end. I also used it for a snare and high toms on some sessions, and when I allowed it to saturate a little it did a lovely job of rounding out over-enthusiastic transients, as well as subtly shaping the drums’ mid-range.

It didn’t work so well on one male vocal, however, or on a much cleaner bass-guitar recording than the one I’d started with. For these parts, I found myself craving a little more low end, which some of my other preamps were able to give me. This was a slight concern, but in a world where we’re spoiled for choice for preamps that portray things fairly ‘honestly’, I genuinely appreciate those that offer something a little different, even if they don’t excel on everything.

According to the published specifications, the 572 consumes 6.5W, which, given the ±16V power rails of the 500-series, means it should draw about 203mA of current. There’s a certain amount of confusion on some online forums about what the VPR Alliance specifications allow. It’s sometimes stated as 130mA per module, but that’s a little misleading: it’s actually 130mA for the +16V rail, another 130mA for the -16V rail. There’s also a further 5mA for the 48V phantom power supply. All of which adds up to 265mA in total, and means the 572 falls well within the VPR Alliance limits. Thus, any chassis should be capable of powering these modules, but it’s worth pointing out that they do get quite hot — I had two 572s in my 500-series rack during the review period, and I noticed that the chassis became very hot to the touch, rather like a valve guitar amp might. So you’ll want to make sure your chassis is well ventilated, particularly if you plan to accommodate a number of 572s in a single chassis.

Whilst I’m nit-picking, the VU meter seemed to me to move between clean and saturation levels very quickly, and I often found it tricky to find what I would consider to be a visual ‘sweet spot’ on the device. After using the unit for a while I actually got much better results by ignoring the meter and just using my ears. (And if I did overdo things slightly, the valve saturation always sounded great!)

Reviewing preamps can often be a little unsatisfying, as the differences between designs can be incredibly subtle on many sources. Often, the real character and differences in designs become more obvious when you drive the electronics harder than technically you should. This is precisely what people often cherish about certain classic designs and this is certainly the territory where I most enjoyed using the 572 Red Stripe. In more sedate, conventional applications, it won’t always be the best choice, but when ‘pushing’ the 572 a little for subtle saturation, or driving it into full-on distortion, it is a real delight.

Just before I wrapped up my review tests, I wanted to sanity-check my opinion of the unit’s tonal colour in a more controlled setting than a session. The only other high-end valve preamp I own is a Thermionic Culture HG-15 and, while it’s not directly comparable, it provided a useful point of reference. I did some sample recordings of a direct bass and six-string electric guitar and, as is always the case when comparing preamps, the differences were very subtle indeed. Nonetheless, they confirmed my initial opinion that the 572 has a slightly leaner bottom end and a little lift in the mid-range around 1-3 kHz. When I compared it against a Neve 1073 preamp the differences were much more dramatic: the classic transistor-based Neve design sounded noticeably darker and with a more rounded bottom end on the bass guitar. These observations are not meant as a criticism, however — I find it very beneficial to have a few options in my rack that give me a particular character, alongside the array of more neutral-sounding options I have in my console. Although cheaper than many designs, the 572 is still a significant investment, so I would encourage you to audition a unit if possible, to make sure it’s to your taste.

IGS Audio have produced a great-looking and nicely laid-out 500-series valve preamp that sounds great on many sources, and especially when driven a little harder for a more characterful effect. I perhaps wouldn’t want a whole console full of them, but as part of a collection of preamps to provide a palette of different sounds, the 572 Red Stripe would see plenty of action in my studio on acoustic and electric guitars, vocals and drums.

There are plenty of valve preamps around these days, but very few of this quality in a single 500-series module. You might consider auditioning the LaChapell 583s Mk2, the Roll Music Tubule or the Crane Song Syren, all of which are more expensive than the 572 — and all sound different!

A unique and interesting option if you’re looking to augment an existing collection of mic preamps. While it doesn’t do ‘clean’, the 572 excels in roles where it’s desirable to ‘drive’ the preamp in search of appealing tonal coloration, or to emphasise the mid-range more than the low end.