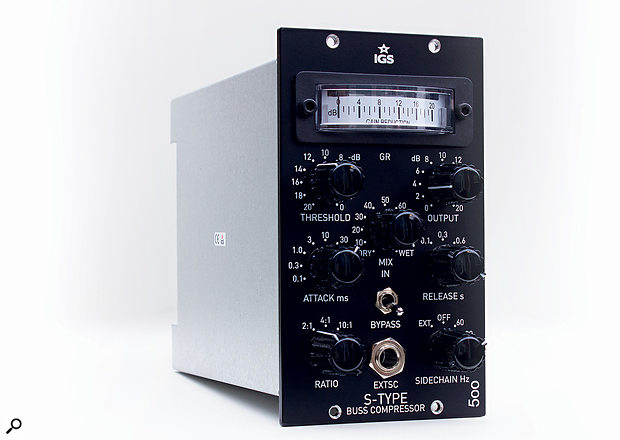 We put this versatile homage to the classic British bus compressor through its paces.

I've reviewed several of Polish company IGS Audio's products over the last few years, and I've always found their products to strike a superb balance of quality and price — good 'bang for your buck', if you will. They're prolific too — whenever I return to their website, I'm impressed with just how many new hardware products they seem to have: they now seem to offer everything from mic preamps, EQs, and compressors to spring reverbs; there are options for those of us who record and mix, and others for the more rarified world of mastering; and there's plenty of choice in both the 19-inch rackmount and the modular 500-series formats. Most recently, IGS invited me to evaluate their S-Type 500 VU, a 500-series stereo VCA bus compressor that's obviously inspired by the compressor built into a very well-known British large-format mixing console.

As you'd expect for a stereo 500-series device, the S-Type 500 VU is a 'double‑wide' module, and as with all the IGS products I've looked at to date, the build quality is faultless. The unit slipped effortlessly into my 500 series rack — this is perhaps not surprising, given that I'm the happy owner of the same company's Panzer 500-series chassis and power supply. (This, incidentally, really earns its name, as both the chassis and the beefy external PSU are built like tanks. It also solved a number of power issues I was having with another company's 500-series rack, so if you're in the market for such a thing, I'm happy to recommend this).

Looking at the front of the S-Type, IGS made the decision to drop the LED meter of a previous incarnation of this compressor in favour of a stylish horizontal moving-coil gain-reduction meter. I think this was a great move, as not only does it look great, but I also think it provides a more helpful visual guide to the compressor's attack and release behaviour. The controls are all nicely spaced out below the meter. The detented threshold and output pots should offer more than enough range in most recording or mixing situations. The remaining knobs are switches, offering plentiful options for attack and release times, along with a ratio control to select from 2:1, 4:1 and 10:1.

These are the basic controls you'd usually expect of a compressor, but there are some other useful functions too. For example, there's a wet/dry Mix control in the centre, which allows instant parallel compression — a very modern and very welcome addition to any compressor, in my view. And, speaking of welcome additions, we also have high-pass filter (off, 60, 90 and 120 Hz settings) for the side-chain signal. When this is engaged, the compressor becomes less sensitive to low frequencies, which has the effect of reducing unwanted pumping when there's lots of bass energy in a signal. As well as this side-chain EQ, there's a front-panel jack socket which can accept an external side-chain signal. While obviously slightly fiddlier to set up, this allows you to be much more creative if you wish — for example, you could route a kick signal here, to make the compressor pump a mix or group bus in time to the beat, or you could route a duplicate of the input signal here, but EQ'd to tailor the compressor's response to taste. Last, but not least, we have a compression bypass switch, which allows you to audition what effect the compression is having on your audio. When the unit is bypassed, it also switches off the backlight on the VU meter — a very simple thing to implement, but a very thoughtful feature.

A stereo VCA compressor of this type is most commonly thought of as a mix-bus compressor, in particular for its fast attack and release characteristics. The latter allows for subtle, transparent results when the compressor is used with a light touch, but also for far more muscular, aggressive gain reduction when required. I decided to audition the S-Type 500 VU by mixing through it and comparing it with both the VCA bus compressor built into my Audient ASP8024 console and a very high-quality vari-mu valve compressor that I had in for review at the same time. I obviously knew the latter would give very different-sounding results, but I thought it might be useful to be able to use this as a point of contrast when describing the sound and behaviour of the S-Type to you.

When compared with the results from the Audient, it didn't take long for me to lean towards what the IGS was giving me. Despite the overall 'flavour' being similar, the controls I had available on the IGS — and the mix control, in particular — meant that I was able to get the compression to add some extra punch and thickness to the indie-rock style track I was working on, without the processing sounding too obvious. The contrast with the valve compressor, though, especially when used for generous gain reduction, was striking. I can best describe the subjective difference as being like that between a gentle hug (the vari-mu) and a stern talking to (the S-Type)! The SSL bus compressor is traditionally used for fairly gentle 'glue' compression, often with the lowest (2:1) ratio and only delivering a decibel or two of gain reduction. But the S-Type's Mix knob brings more options into play. Using it in this way on the mix bus, I found myself liking the 4:1 ratio and allowing the gain reduction to be upwards of 3-4 dB. My default setting quickly became having the attack on the slowest setting (30ms), the release as fast as it would go, and the mix control set to around 60 percent. I also found myself wanting to use the side-chain filter a lot — this can be such a powerful feature on any mix that contains even a modest amount of low-frequency energy, and it really does add some flexibility in terms of what you want the compression to clamp down on. I found myself liking the 90Hz or 120Hz settings.

Along with mix-bus duties, VCA compressors are much loved on drums, and this is the application where the S-Type 500 saw the most action here at Half-Ton Studios during the review period. The other engineers and I quickly began to rave about using it to compress stereo room mics when recording drums. This is an application where you can get a bit more stuck in — the 10:1 ratio allows you to deliver some really explosive drum sounds. The clean-sounding nature of the VCA circuit means that even when you use the compressor assertively, making sources such as cymbals get very trashy indeed, things still retain a sense of 'clarity'. In this role, engaging the side-chain high-pass filter at 120Hz allows the kick drum to 'bloom', which can be lovely in drum room mics. I became quite addicted to using this effect, and I was normally just left with the decision of how far to turn the mix knob at the recording stage! Another thing I've taken to doing when recording drums is setting up a live parallel-compression option, which I record as a separate stereo channel into my DAW. Using my console's aux sends, I usually just route the close mics and a touch of the overheads to the compressor to create a punchy, thickening compression that the S-Type 500 VU took care of effortlessly. For both of these drum applications, the 10:1 ratio was a lot of fun, and setting the attack and release as fast as they could go provided a good starting point.

There are plenty of options out there when it comes to quality SSL-inspired VCA compressors, but when you consider the comparatively modest price of the S-Type 500, along with the very useful mix and side-chain filter controls, I think it's fair to say that IGS audio have produced a very credible option indeed in this compact form. If you have an outboard or hybrid mixing setup and are looking for an affordable, versatile stereo compressor for mix- or drum-bus duties, then you could do a lot worse than put this on your audition list. If you also do some degree of live drum recording and like to capture creative room mic options, then I'm confident that you'll really enjoy what this compressor has to offer!

In the 500 series, SSL, Serpent Audio, TK Audio, Wes Audio, Obsidian and Bettermaker — and several others — offer stereo VCA compressors based, to varying degrees, on the original SSL design.

The S-Type 500 VU packs a lot of features and flexibility into a 'double‑wide' 500-series module. It delivers the goods when used in the role of the mix-bus compressor that clearly inspired it, but it's more versatile than that — the mix control and side-chain facilities are genuinely useful creative options for both tracking and mixing.