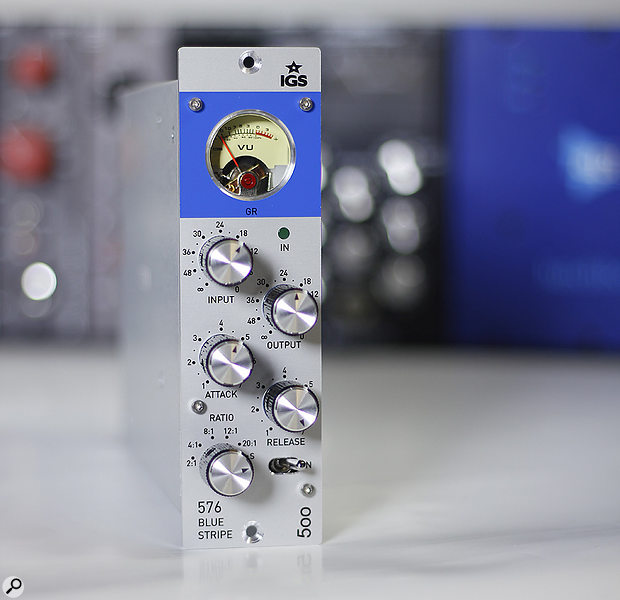 This stylish module brings the ‘blue stripe’ revision of the UREI 1176 to the 500 series.

I was very pleased to get my hands on a new hardware offering from Polish company IGS Audio, as I had a great time reviewing their four-channel Springtime reverb earlier this year (http://sosm.ag/igs-springtime). I was impressed with the build quality of that unit — not to mention its sound — and it’s worth noting that some of their other products have received similarly positive reviews from other SOS writers over the last few years. But we’ve only scratched the surface — visiting the IGS web site for the first time since evaluating the Springtime, only a few months later, I was impressed by the sheer number of products the company now produce. They boast a sizable range of analogue processing tools for tracking, mixing and mastering.

On this occasion, I was invited to review IGS’s new 576 Blue Stripe FET compressor, which is the first IGS 500-series unit I’ve tried. My first impressions were that this unit has a nice clean-looking design which achieves a good aesthetic balance between modernity and its fairly obvious source of vintage inspiration. The ‘blue stripe’ revision of UREI’s 1176 is one of those audio devices that have achieved legendary status and that, due of their relative scarcity and eye-watering resale value, many of us will only get to experience in the form of a plug-in emulation. If you’re interested in the evolution of this processor, including the differences between the various revisions, there’s a great article on the Universal Audio web site (www.uaudio.com/blog/analog-obsession-1176-history), which is well worth checking out.

Personally, I find that a Blue Stripe has a bit more of an ‘aggressive’ character than more recent revisions, and delivers a more obviously coloured tonal change that can help the mid-range of vocals and instruments poke through a mix — in other words, it’s something less clean, and has a more ‘vibey’ sound than a modern 1176. I was very intrigued, then, to see if IGS Audio has managed to capture the essence of these revered units in a single 500-series module, particularly given that they cost a fraction of the price of the original, or indeed a modern 1176.

As I’ve come to expect of anything from IGS, their Blue Stripe gives off all the right signals when you get your hands on the controls. There’s a generously sized back-lit VU meter, and the stepped pots offer just the right resistance when rotated. In terms of control, the options available are what you’d expect from any 1176-style compressor: the input and output knobs dictate how much level comes in and out of the unit, and thus when the compression is introduced. We then have attack and release controls, with the fastest settings to the right of course, along with the ratio control and compression bypass switch. Ratio-wise, we have 2:1, 4:1, 8:1, 12:1, 20:1 and ‘Slam’, which emulates the famous ‘all buttons in’ option. If you’re not familiar with this design quirk, engineers discovered, probably by accident, that if you push in all the ratio switches at once on an 1176, it creates an over-the-top, explosive-sounding compression effect that can be magic on the right source (and awful on the wrong one!).

The first chance I had to use the 576 was on an electric-guitar tracking session. I was using it very successfully just to knock a decibel or two off the signal, and I found it very easy to dial in the right amount of gain reduction. I have two modern UA 1176’s that see a lot of action when I’m tracking, and so, despite it being new to me, the IGS unit felt completely intuitive. I used it again on the same session when the time came to capture some quick scratch vocal takes at the end of the day — having been assured by the singer that these were not to be the definitive vocal takes, I decided it was the perfect opportunity to really get stuck into the 576 and see what it could do. With the attack set at around three-quarters towards the fastest setting, and the release at its fastest, I treated the vocal to upwards of 10dB of gain reduction. In fact, I often had the meter needle pinned completely down on the loudest parts! The mid-range of the vocal suddenly sounded much more present and exciting, and it also felt as if some of the really low end of the vocal had been shaved off. It was one of those nice moments with analogue hardware when you decide not to be shy and are rewarded with a great sound that requires very minimal further mix processing. It’s a pity it was just a scratch vocal!

I began to notice this tonal change more as I gained experience with the 576 and, without making any claims to be a connoisseur of the ‘Blue Stripe’ sound, I suspect this is a big part of these units’ charm. It’s worth noting, though, that precisely the same characteristics meant that I found myself not liking it as much as my more modern 1176s on more bass-heavy instruments (unless I felt they needed to sound a bit ‘leaner’, that is). Ratio-wise, I tend to stick at 4:1 or 8:1 with my 1176’s for most sources, and I found myself wanting to do the same with the 576. That said, I really enjoyed using it set to ‘slam’ on a mono room mic; I felt it captured the flavour of the ‘all buttons in’ mode very nicely.

As you can probably tell, I enjoyed my time with the 576 Blue Stripe very much. IGS have produced a good-looking, well-built addition to the 500-series market. While this isn’t the type of compressor that you’d choose to deploy on every source, if you like that heavily compressed, ‘spanked’ mid-rangey vocal sound then it’s well worth trying because it does this really well.

It imparts a slightly coloured sound to any audio passing through the unit, which I found usually sounded great on male and female vocals as well as electric and acoustic guitars, though slightly less so on kick drums and bass guitars. I’m unable to vouch for how authentically it would match up to an original ‘Blue Stripe’ as I didn’t have one available to do a direct comparison, but as a regular user of 1176s, and someone who owns a few different software emulations, the 576 Blue Stripe certainly offers what I would perceive as that character, especially if you aren’t shy with how much compression you apply to a vocal.

The market for affordable hardware ‘homages’ to the 1176 has become increasingly densely populated in recent years (see the Alternatives box), and there are many options available at this sort of price. But IGS Audio have thrown a very credible contender into the ring, and are to be commended for cramming it all into a single, good-looking 500-series module without compromising on the ease of use. I would certainly recommend putting this on your audition list.

At around the same price, 1176-inspired compressors are available in either 500-series or rackmount form from Klark Teknik, Warm Audio, Purple Audio, Lindell Audio and Wes Audio, amongst others. If you’re hoping specifically for a Blue Stripe sound, then the options are much more limited, but Serpent Audio’s Splice MkII offers both Blue Stripe and ‘Blackface’ flavours, and you could consider a DIY build courtesy of one of Hairball Audio’s projects.

This high-quality analogue compressor does a great job of packing UREI’s 2U 1176 ‘Blue Stripe’ compressor design into the 500-series format.