Hand built in Poland, this range of pedals features bespoke powder-coated aluminium housings, and high-quality connectors and electronic components, along with true bypass switching. Their UK distributor sent me three of their pedals to try. 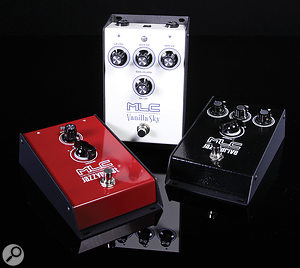 The first I tried was the Vanilla Sky Overdrive. Based around a Burr Brown amplifier chip, rather than the more traditional JC4558 dual op-amp, this is essentially an overdrive pedal that's designed to deliver wide dynamics with very low noise. It's powered from a 9V battery but also accepts a Boss-style 9V PSU. The cases all have flanges with holes at the front and back of the base-plate allowing for secure fixing to a pedalboard. In common with most overdrive pedals, the Vanilla Sky Overdrive has Gain and Volume controls as well as a bypass footswitch with a status LED. Additionally there are two tone controls labelled Blue Colour and White Colour, which govern cut and boost of the low and high frequencies independently.

I was immediately impressed. As with my own Fulltone OCD, the sound cleans up as you back off the guitar volume control, to the point where it sounds virtually identical to the pedal bypassed with the guitar turned up full. As you add drive, both chords and notes retain good definition, and the overall sound takes on the familiar classic rock bite and sustain. That means you can leave it switched on and use your guitar's volume control to manage the transitions to and from solos and suchlike, should you prefer to work that way. The EQ works well enough. I actually preferred the sound with very little EQ added, but it's always best to have more control range than you need rather than too little. I don't think I'd be going out on a limb if I said this was amongst the best overdrive pedals I've ever tried, with only the Fulltone OCD being in the same league when it comes to retaining the guitar's original character.

Next comes the Jazzy Boost. According to designers, this pedal encompasses 'three decades of guitar tone', accessed using the three rotary switch positions. The only other control, other than the bypass footswitch, is the Boost knob. Position one is designated German Boost, and this places emphasis on the mids and highs, with the lows being rolled back slightly. The designers tell us this is based around the AC128 transistor, which produces what they describe as a glassy sound that's typical of germanium transistors. Position two switches to a BC108 silicon transistor, a part familiar to any electronic hobbyist, and this adds mainly clean boost. Moving to the third switch position, the gain comes from a MOSFET, which delivers up to 20dB of boost with a little harmonic coloration.

While all three positions add a different touch of colour to the sound, this pedal really excels at driving the front end of your amplifier, so the final sonic result is very dependent on how your amp's front end responds to being pushed in this way. As with the Vanilla Sky, the circuitry is quiet and the result comes across as very natural sounding.

Finally we come to the Jazzy Drive pedal, which has four knobs, one of which controls a four-way mode selection switch. The three rotary controls adjust Level, Tone and Drive in a fairly self-explanatory way. Again, this pedal uses the Burr Brown amp IC and polypropylene capacitors for low noise performance, in what is effectively an overdrive pedal with switchable tonal modes. The amount of overdrive is not excessive, so using it with a clean amplifier gets you into soft crunch and blues territory, whereas adding it to an already dirty amp just piles on the filth — but in a very classy way! Those four mode-switch positions replace the two positions of the original version of this pedal, on which the only options were Vintage and Modern.

On this current version, there are four Mode settings which offer different amounts of low end, with the lows becoming increasingly prominent as you progress through the four positions. Tone affects mainly the highs, while Mode seems to affect the lows more, but perhaps with a little filtering of the extreme highs too. I couldn't find a setting that felt entirely flat, but the end result always sounded good. With single-coil pickups there's just about enough drive on tap to get you into blues territory, whereas a powerful humbucker will extend the range to classic rock. Unlike the Vanilla Sky, which you could leave on all the time, I think this pedal is best suited to being kicked in for solos.

These are well-made pedals, which have been voiced by musicians who know exactly what they're aiming for. While each has a unique character, they're all in the same league in terms of quality as, say, Fulltone's pedals. My favourite is the Vanilla Sky: it does everything you could ask of an overdrive pedal, without trampling your tone. Considering that these are boutique, hand-built pedals, the cost is very reasonable. Paul White