The HV37 makes Millennia's highly regarded solid-state preamp design available in a more affordable format. Does it cut any corners?

American manufacturer Millennia Music & Media Systems are probably best known for their ranges of high-end microphone preamps and twin-topology signal processors (with user-selectable valve or solid-state signal paths). Strangely, we've only reviewed a few of these twin-topology products in previous editions of SOS (STT-1 recording channel in April 2001, TCL2 Compressor in January 2000, and NSEQ2 parametric EQ in July 1999), but the HV3C dual-channel and HV3D multi-channel preamps are the company's flagship designs, which are massively popular with classical and acoustic recording specialists.

The new HV37 two-channel microphone and instrument preamplifier — the subject of this review — shares the preamp design pedigree and entirely balanced signal path as those larger HV3 models. However, the HV37 is essentially two HV35 modules (Millennia's 500-series preamp) combined with an integral universal mains power supply and housed in a 1U rackmounting box.

Like all Millennia products, the HV37 exudes class and quality from its understated, black front panel, which is adorned with clear white legends, and illuminated buttons in blue, yellow, red and green. The 1U rackmounted case extends around 230mm behind the rack ears, and the universal power supply accepts any voltage between 100V and 240V AC. In addition to a fused IEC mains inlet, the rear panel carries just four XLR connectors, two female sockets for the transformerless mic inputs and two males for the electronically balanced line outputs.

The front-panel controls are simple and mostly self-explanatory, each channel featuring a variable rotary gain control and switches to select the instrument input, high-pass filter, ribbon mic mode, phantom power, polarity reversal, and 15dB pad. Two LEDs per channel provide the only level metering, configured in a basic green/red traffic-light arrangement, and the instrument input is via front-panel TS quarter-inch sockets. A simple rocker switch on the right-hand side powers the unit.

To flesh out the details a little, the gain range available for the microphone input is 14.5 to 60 dB (not the 8.5 to 60 dB as stated in the online specifications), and the high-pass filter has a -3dB turnover at 80Hz, with a slope that appears to approach second order (rather than the pointlessly gentle 3dB/octave suggested in the user guide). The ribbon mic button disables the phantom power, DC-couples the mic to the input stage (ie. bypasses the input DC-blocking capacitors required when phantom power is available), and is supposed to introduce an additional 10dB of gain, although that doesn't appear to be quite the case (see below). 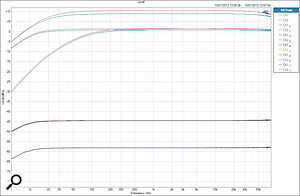 A series of plots taken from an Audio Precision analyser with a -58dBu input. It shows, from top to bottom (left channel green, right channel red): the frequency response at maximum gain in ribbon mode, normal mode, and with the HPF engaged; at minimum gain; and at minimum gain with pad engaged.

Inside the rack case, it's clear that the preamp electronics are exactly the same as on the HV35: the circuit boards even have the 500-series edge connector still in place. However, the build quality is very good and the switched-mode power supply is contained in a separate metal-encased box within the overall case. Apparently, the design is based very closely on the original HV3 fully balanced discrete class-A circuitry, but with various modifications to cope with the lower power-rail voltages provided in the standard 500-series system, and to accommodate a continuous gain control instead of switched gain.

Level matching between channels at maximum and minimum gain settings wasn't quite as good as I was expecting, but that's not entirely unusual when using rotary pots to set the gain — and at least it's simple to trim out any imbalance when working with stereo mic arrays. There was also some imbalance in the 'signal present' metering LEDs (the left channel illuminating at -31.6dBu and the right at -37.5dBu). However, this isn't a problem in practice: 'signal present' isn't a critical indication, after all. Thankfully, both red 'peak' LEDs illuminated within a smidgen of each other at about +21dBu. Audible overload distortion is apparent when the output level exceeds about +25.5dBu, and hard clipping occurs at +28dBu. The maximum input level is claimed to be +20dBu (with the pad selected), but significant distortion could be heard above +17dBu, which, I should point out, is still an impressive figure for mic input headroom!

Most preamps that employ a single potentiometer to adjust the entire gain range suffer from a degree of nonlinearity in the relationship between gain and degrees of rotation, with most exhibiting very rapid gain increase towards the clockwise end of the range. Millennia recognise this issue and in the HV37 user guide they state that there is a "high gain jump near full clockwise for low-level signals”. In practice, I didn't find the gain control to be excessively bunched at the high end, and it remained reasonably controllable throughout. The pad button actually provides about 13.5dB of attenuation, rather than the stated 15dB — but that doesn't detract from its purpose — and when engaged the minimum gain is just a fraction over unity gain (under +1dB).

The ribbon mic gain boost button appears to change the law of the rotary control slightly and adds about 8dB of additional gain, but only when the gain control is at maximum. At lower gain control settings it appears to have negligible effect! The right-hand channel ended up with about 2dB more maximum gain than the left-hand channel too when the ribbon mode was selected. Also, despite being DC coupled, there is still a clear LF roll-off in place, with the -3dB point extending to around 20Hz with the ribbon mode engaged and 10Hz without. At the high end, the roll-off is well above 80kHz in normal mode (the limit of my test equipment) with the published specifications claiming over 300kHz. With the ribbon mode engaged there is a hint of an earlier HF roll-off, but it is still well beyond 80kHz.

The instrument input impedance is not specified, but is clearly very high, and the gain range via the unbalanced front panel input is exactly the same as for the mic input (14.5 to 60 dB). The pad, polarity and HPF buttons all still work when the instrument input is selected, but the ribbon and phantom power switches have no effect.

The analogue I/O are, as you'd expect, presented on XLR sockets.

The HV37 costs almost exactly the same as two HV35 'Lunchbox' modules, and is about 25 percent cheaper than the HV3C, which makes it a very cost-effective alternative, especially since there are more features and greater versatility in the HV37. A good friend uses an eight-channel HV3D for a lot of his location recording work and I have often coveted the fast, detailed and silky, but fundamentally uncoloured and transparent, sound it captures. The HV37 shares that character exactly and impeccably. I was very hard-pressed to spot any significant difference between them, although the headroom margin is a little lower in the HV37 compared with the larger HV3 models. However, that is understandable, given the reduced power-rail voltages, and still way more than sufficient for all but the most demanding of applications.

I'm slightly troubled by the apparent errors in the published specifications and user guide, and the disparities between my own measurements, and the gain-matching between the two channels wasn't quite as tight as we are used to with the more expensive Millennia products. However, this is nitpicking and doesn't present any significant operational problems. The HV37's performance is, by any definition, impressive and sublime.

The 500-series HV35 model is an immensely attractive proposition for anyone with an empty slot in their Lunchbox rack. I might even go as far as to suggest it should be a no-brainer purchase, since you get almost all the HV3 quality with massive convenience, as well as more flexibility and features. However, not everyone has embraced the Lunchbox format, and for those the HV37 provides the same features at the same price in a conventional rackmount box. What's not to like?

Given its price, the HV37's competitors include the Focusrite ISA 428 (quad-channel), the Lavry Blue, the Trident Series 80B (with EQ) and the DACs MicAmp II.

The HV37 (and its 500-series sibling the HV35) builds on Millennia's classic HV3 mic preamp. Offering a dedicated instrument input and ribbon mic mode, it represents attractive value for money.