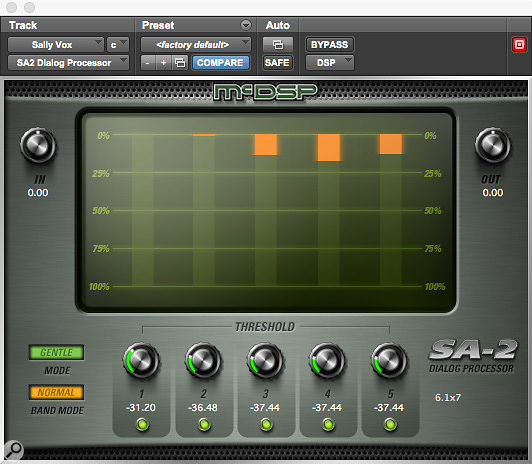 Dialogue is more often than not the key narrative element in any story, whether it is a drama or documentary, news or advert. If you cannot hear and understand the dialogue, you cannot follow the story. Especially when you start adding music, sound effects, Foley and so on, it is vital that the dialogue is still clearly audible in the mix, or people will switch off!

McDSP’s SA2 Dialog Processor is based on hardware originally conceived by Academy Award winning re-recording mixer Mike Minkler, who has worked on hundreds of films including Black Hawk Down, Star Wars and Dreamgirls. Mike found that when he brightened dialogue recordings to improve intelligibility, he would get spikes in various places in the frequency spectrum, and so he looked for a tool to help him manage those spikes. He got an engineer to build him a nine-band limiter, and although it didn’t do quite what he expected, he did find that the five top bands were very good at de-essing and also took care of the problematic frequency spikes, so this became a tool that he depended on heavily.

After years of use, this bespoke box was getting past its best, and so Mike started to look for someone who could make a digital version. Colin McDowell at McDSP obliged, and the result is the SA2 Dialog Processor — which Mike has used on five movies already!

The SA2 Dialog Processor is an active equaliser which models the five key bands from Mike Minkler’s original custom processor, and adds further controls to enable you to set the degree of processing. Though it’s optimised for speech, the SA2 plug-in is equally useful for sung vocals, and also shines in roles where you might otherwise turn to an EQ, de-esser, or multi-band compressor, for instance where you need to smooth out spiky cymbals or close-miked strings. McDSP have created a good range of presets covering most of the possibilities.

There are Threshold controls for each of the five bands, which can be bypassed individually, and each band also has a gain-reduction meter. These display gain reduction as a percentage of the maximum 12dB, so when the meter shows 25 percent, it means the band in question is applying approximately 3dB of level reduction. On the left-hand side of the interface are two separate mode selectors. The button labelled Mode gives three options — Gentle, Normal and Assault — which affect the attack and release times of the dynamic EQ across all the bands, while the Band Mode button provides options running from Narrow to Vari. McDSP recommend setting both modes to Normal as a starting point, but I found I more often preferred Gentle and Wide respectively; where these aren’t aggressive enough to tackle a particular problem, you have the other, more intrusive modes to draw on.

I tried the plug-in on a variety of audio, including a sung vocal line that got particularly harsh through the loud parts of the song as well as suffering from problematic sibilance. When I replaced the de-esser I had been using with SA2, I very quickly got a very good result. I have also tried it on voiceovers, and it handles those spikes to which Mike Minkler refers very well. McDSP are also quite right in saying that it’s not just a dialogue processor: it’s great on scratchy strings, breathy flutes and anything with spiky top end. So now you can brighten content to help it cut through the mix, without the usual side-effects.