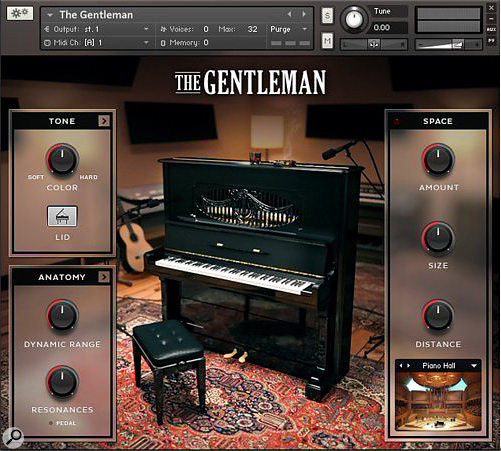 Grand pianos can sound fantastic, but many of us cut our teeth playing old uprights in homes and schools and still want that kind of sound for our recordings from time to time. Aware of the demand, NI created The Gentleman, which is based on 2300 samples taken from a 1908 upright. It can be bought on its own, or as part of NI’s Definitive Piano Collection alongside The Maverick and The Grandeur libraries.

The Gentleman’s interface shows an image of a cosy-looking room with a piano in the middle. There’s a Persian rug underneath and a smouldering cigarette on top and the whole setup suggests warmth and intimacy. Either side of the piano are three fairly minimal control panels, but two of them can be expanded to reveal a more complex array of sound-tweaking options.

Top left is the Tone panel, which has a Soft to Hard knob labelled ‘Color’ and a button that toggles between the lid being open and closed. If these basic controls prove too restricting, the panel expands to show a three-band EQ alongside controls governing the tonal depth, transient characteristics and the relative balance of the low- and high-key position mics. There’s also a very simple compressor with 17 presets and an amount knob.

Below the Tone panel are the Anatomy controls. Here the adjustments deal with the dynamic range and resonance, but when expanded the panel offers governance over the level of overtones, the stereo image width, velocity curve, overall tuning and four noise types. The noises (namely Hammer, Damper, Pedal and String), can be turned on/off individually or set to a level ranging from -100 to -10 dB, but none have a overly dramatic affect on the sound. On the other side of the interface is a convolution reverb with Amount, Size and Distance controls and a menu of 26 presets covering all the usual venue and room types.

By default the piano sound is warm rather than clinical, but still fairly lively. The bass notes have that satisfying growl that old uprights often have, although they lack just a little bite in the second octave, while at the very top the tone becomes almost percussive. In particular, The Gentleman’s note decay is very appealing. It swells after the note is released and then fades to a resonance that shifts across the stereo picture. Held notes produce slightly darker resonances, and it’s subtle details like this that help The Gentleman sound like a real piano.

In fact The Gentleman would be almost perfect if there wasn’t a slight click sound just after the attack of the F1 key and a rather apparent crackle on E4. Notes played softly are not affected, as there are 16 velocity zones, but the only way to fix the louder notes is to turn the Tone Color knob until it’s slightly more Soft than Hard. In my experience, most virtual piano instruments have quirks, but it’s still disappointing that the recording engineers missed these issues.