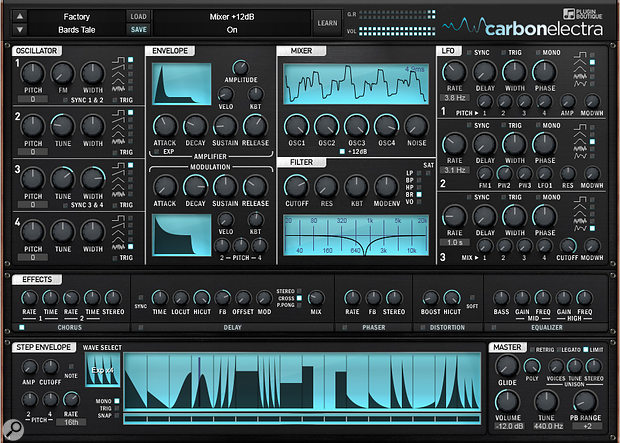 Question: What’s the difference between Carmen Electra and Carbon Electra? Answer: One is a glamour model and performer, the other is a four-oscillator subtractive synth that will work as a plug-in within your DAW.

The plug-in’s chief characteristic is its analogue-style interface. Like a vintage synth, all the controls are displayed in one panel, with nothing hidden away on pop-up windows or tabbed pages. The only menus that exist are for presets, which is just as well because there are over 600 of them, including some that are the work of famous producers such as Carl Cox.

All four oscillators are constantly running and can be balanced within a mixer panel, which also includes a fader for adding noise. Also present is a button for boosting the signal by 12dB, thereby instantly achieving an overdriven sound. The mixer section’s best feature is its screen, which is a little like an oscilloscope that constantly monitors the waveform that’s produced by the summing of the oscillators. If, for example, Oscillator 1 is set to sync with Oscillator 2 (Oscillators 3 and 4 can also be synchronised with one another), the display shows how they line up and modulate one another. All four oscillators have five waveshape options, including nose, so rather complex waveforms can be built by carefully mixing and matching the different types.

Opposite the oscillator section is a panel containing three LFOs, each with Rate, Delay, Width and Phase controls, five waveshapes to choose from and the option of synchronisation with the host’s tempo. Each LFO controls a different set of parameters, so that pretty much all the controls of the four oscillators and the mixer section can be driven by an LFO. In addition to all this there are amplifier, modulation and filter sections with envelope controls and their own graphical displays, and many of their parameters can be controlled by the LFOs too.

No modern synth would be complete without effects of some sort, and in this case, the options include a chorus, delay, phaser, distortion and EQ. There are no preset menus for these, just a panel of controls, but I found them to be very usable nonetheless.

Finally, at the bottom of the interface is the Step Envelope tool, which is basically a step sequencer that can be assigned to modulate a range of things like the filter cutoff and the pitch of certain oscillators. Sequencers of this kind are quite common in virtual instruments nowadays, but this one’s USP is that it allows the steps to be drawn into almost any shape.

Overall, Carbon Electra does a great job of combining traditional analogue-style features with more modern graphical tools, and it presents everything within one interface. There is something tellingly digital about its sound, I have to say, but programmers should still be able to create a wide range of vintage-style noises with it. All it needs now are help pop-ups so new users don’t have to sift through YouTube instruction videos!