There's no law to say that microphone diaphragms must be circular, and in fact a rectangular diaphragm, such as the one inside this Swedish mic, can offer some unique and useful characteristics.

Swedish manufacturers Milab have always ploughed their own furrow when it comes to microphone design and, though they're not the only company to do it, their flirtation with rectangular microphone diaphragms might seem a little odd to those of us brought up on the notion that mic diaphragms should be round. A circular diaphragm produces a polar pattern that is identical in the vertical and horizontal plains, but because of this symmetry, a circular diaphragm also has a single pronounced resonance that needs to be tamed by damping. By contrast, a rectangular diaphragm will have one resonant frequency associated with its length and a different one with its width, so the effect of the resonance is distributed and thereby diminished.

Another unusual characteristic of a rectangular diaphragm is that it has a different directional pattern in the horizontal plane to the one it has in the vertical plane. If the microphone is placed vertically, so that the diaphragm's longer axis is upright, it will exhibit a wider directional pattern in the horizontal plane than in the vertical, in much the same way as a line-array loudspeaker does. This can be of benefit when you're trying to minimise spill or reflections from specific directions. This lack of symmetry can also be exploited in other ways when you're miking voices or instruments. For example, a vertical setup when recording vocals would focus mainly on the mouth, whereas a horizontal mounting position would cover all of the head and also pick up some chest resonances, producing a different tonal colour. Similarly, if you're miking acoustic instruments that radiate from a large surface, such as the acoustic guitar, the microphone orientation can be used to home in on the more desirable attributes of the instrument or to minimise less desirable attributes. Once you appreciate these differences between the rectangular diaphragm and the conventional circle, the whole concept starts to make a lot more sense.

Milab's DC196 is a deceptively small capacitor microphone, just 145mm long, that houses a larger capsule than one would expect, comprising a pair of back-to-back rectangular diaphragms. It has a switchable pattern (cardioid, omni or figure-of-eight) and claims to have better than typical built-in pop protection. The capsule is mounted on a rubber shockmount and for high SPL applications there's a switchable attenuator that comes before the preamp circuitry. A phantom power source of 48V is required, and the balanced output is conventionally wired on an XLR connector.

The mic's frequency response covers the full 20Hz to 20kHz, the provided graph showing only the barest hint of a presence rise around 10kHz and a gradual roll-off above 15kHz, to around 6dB down at 20kHz. The most obvious presence rise (and this is still very small) is in figure-of-eight mode, where a hint of 'bass tip-up' (which would produce a small proximity effect) is also evident. Clearly, these microphones are designed to be flat rather than flattering. A maximum SPL of 132dB can be accommodated without the attenuator, so with the latter switched in the maximum SPL handling is a massive 144dB. Even so, this is also a fairly sensitive microphone (21.5mV/Pa ± 1dB at 1kHz), and with a self-noise of only 12dB (A-weighted) it is perfectly capable of recording the most delicate sources too.

It seems that engineers use these mics for a very wide range of applications, and even though the mic may look a bit lost in a vocal booth it has a reputation as a very good vocal microphone. It is also widely used around drum kits and in front of guitar amplifiers, in addition to the more obvious acoustic instrument sources, so it would appear to be very versatile. 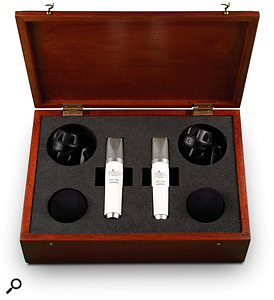 The review models came as a matched pair in a mahogany box, which makes a nice change to the usual camera case. I had to do a double take when I opened the box, as these mics really are quite small. The DC196 is little larger than a pencil mic, yet it has the physical shape of a typical side-address capacitor microphone, giving the impression that it was built after some Spinal Tap 'Stonehenge'-style error, where dimensions were given in inches but the mic was built in centimetres. Size aside, this mic is very ruggedly built, with the attenuator switch recessed into a slot in the body so that it can't be operated unintentionally — or even intentionally, unless you have a ball pen, toothpick or other similar prodding instrument about your person! Changing the mic's polar pattern is less of a challenge, as the small rotary control is shaped so that it can be easily gripped. The capsule fills almost the entire basket, so the diaphragm area is probably comparable with that of a typical large-diaphragm studio mic.

A compact, rubber-lined stand adaptor accompanies each mic, providing the benefits of more conventional shockmounts but without taking up so much space. I really like this soft rubber shockmount, which is very effective, easy to slide the mic into and very secure.

Changing the mic's polar pattern is less of a challenge, as the small rotary control is shaped so that it can be easily gripped.

Tested with sung and spoken vocals, the DC196 comes over as generally honest, but with a high-end smoothness reminiscent of a ribbon mic — and without the bandwidth-limitation penalty of such a mic. The recordings I made with the mic responded easily to gentle EQ, but other than the exceptional smoothness of tone there was no obvious tonal leaning.

As a mic for electric guitar cabinets, the DC196 performs brilliantly, capturing something very close to the perceived sound of the amp in the room but again with a polished high end devoid of the harshness that often arises when more conventional capacitor mics are used in this application. Cranking the amp up loud didn't upset the mic a bit, and because of its extended low-end response the DC196 is equally at home capturing bass sounds. I did most of my tests in cardioid mode, but the omni and figure-of-eight patterns also work fine. They're not quite as transparent as those of the best dedicated omni or dedicated figure-of-eight models, but that's the nature of dual-diaphragm mics with switchable patterns, and the alternative patterns are still very good. Acoustic guitar was also easy to record with this microphone and, as expected, changing mic positions gave a wide variety of tonal options.

I know there's a fashion at the moment for buying microphones that have an obvious character or colour, but I quickly warmed to the 'tell it like it is' honesty of the DC196, and because it does respond so willingly to EQ it's easy to dial in a bit of a presence peak if you feel you need one. This isn't a cheap microphone, but at the same time it isn't stratospherically priced either, especially when you consider its professional pedigree. If you need a versatile all-rounder that excels at smoothing out difficult sources without robbing them of all their high-end detail, this is a microphone well worth considering.

In terms of smoothness, accuracy and selectable patterns, this mic could be compared to the Pearl TL4, which is probably its closest competitor. The likes of the Sennheiser MKH80 and the Brauner Phantom V are also worth considering. Slightly more coloured (characterful) mics for comparison would be the Neumann TLM170 or U89, the AKG C414B XLS and the Beyer MC840. Two mics that are similarly smooth sounding are the SE ribbon mic and the Rode NT2A, but they are not equivalent in terms of design or polar-pattern flexibility.