The Mindprint T‑Comp is a two‑channel compressor incorporating a variable‑saturation tube stage, the idea being that it can be used either for clean gain control or to add controllable character and warmth. The compressor stage uses a THATs VCA chip as the gain‑control element, with the two dual‑triode tubes used purely for coloration. A digital I/O option may be retrofitted to the unit at any time to provide 24‑bit S/PDIF digital I/O at either 44.1 or 48kHz. 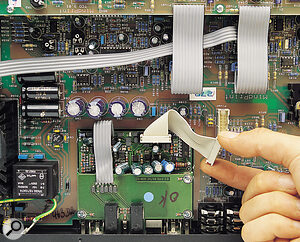 Housed in an exceedingly elegant 1U rack case with perspex 'tube viewing' window, the Mindprint T‑Comp uses combination XLR/jack sockets for the balanced inputs, with separate jacks and XLRs for the outputs. TRS insert jacks are also fitted, allowing other analogue processors to be inserted between the input amplifier stage and the compressor. A ground‑lift switch is provided as standard and, if the optional digital interface is installed, there are phono connectors for the S/PDIF ins and outs plus a 48/44.1kHz selector switch. Analogue jacks allow access to the input of the left channel A‑D and the output of the left channel D‑A, enabling the unit to be used as a stand‑alone, single‑channel A‑D and/or D‑A converter when needed.

The front panel comprises two sets of fairly familiar compressor controls, along with a stereo link switch for stereo operation. In stereo mode, the two channels are controlled from the left set of channel controls, though Link only affects the compressor controls, not the gain or tube settings: it effectively gangs the side‑chains so that both channels always receive the same degree of compression, regardless of any left/right differences. Prior to the compressor sections are line input stages featuring input gain controls and LED metering that reads from ‑14dB to clip in six steps. The meters can be switched as a pair to read the channel input or output level, and an output level control is available to match the compressor output to whatever piece of equipment comes next in line. This control would also be used to optimise the signal level prior to A‑D conversion if the digital option is fitted. A Bypass button takes the whole of the compressor out of circuit, including the output gain control, while a 12‑stage LED gain‑reduction meter shows how much compression is being applied over the range ‑1dB to ‑22dB.

The compressor is designed to have a soft‑knee characteristic and is set up via the usual Threshold, Ratio, Attack and Release controls. The Adaptive switch brings in an elaborate programme‑dependent circuit to manage the time constants but, unlike the auto modes on some compressors, the manual controls still operate. Whichever settings the user chooses are used as the basis for the adaptive circuit's auto‑adjustments.

A less obvious feature is Filter, which inserts a high‑pass filter into the side‑chain so that the compressor responds less aggressively to bass signals. This can help to achieve a more natural sound when processing complete mixes, by ensuring that the high‑frequency content of a mix is not pulled down when high‑energy bass sounds are present.

The other main ingredient of the sound is the Tube Sat section, where a control of the same name varies the amount of tube drive and hence coloration. In order to provide the tubes with a consistent drive level, regardless of the amount of compression being applied, the compressor includes a circuit, linked to the threshold setting, that automatically compensates for gain lost by compression. Up to around their half‑way settings, the tubes introduce a gentle warmth, whereas piling on more drive results in more audible distortion. A dual‑element LED comes on when the channel is not in bypass mode and reads green until the signal level gets high enough to introduce some tube coloration, in which case the LED turns orange. For levels that are high enough to cause audible distortion, the LED glows red.

I found the Mindprint T‑Comp as easy to use as any other compressor — indeed, its auto gain‑control function makes it easier than most, as you don't have to adjust a make‑up gain control every time you vary the compression parameters. In manual mode, the compressor action can be adjusted from very subtle to quite hard‑hitting, but the sound never gets out of control in the way that some compressors seem to allow. You can get a little pumping, but definitely no wallowing! The tube drive brings in a nicely controlled level of warmth, and even the more extreme settings result in relatively mild‑sounding distortion. Manual mode works particularly well on bass guitar and drums, and by employing a little tube drive, these can be made to sound very solid and 'produced', without taking away the character of the original sound. Manual is also good for vocals where you want to combine gain control with 'compression as an effect'; setting a long attack and a short release delivers a reasonable approximation of an opto compressor.

Switching to Adaptive seems to make the compression more benign so, although you can still control the dynamic range by any amount you choose, the result is generally smoother and more natural than in manual mode. Adaptive works particularly well on complete mixes or on vocals where you want to control the levels without changing the sound too much, though you can still use the tube drive to thicken and flatter. In either mode, switching in the filter makes a further improvement when working on tracks that include widely varying bass levels, since the compressor is less likely to overreact to kick drums or staccato bass‑synth notes.

The Mindprint T‑Comp is a very nicely engineered, attractively styled stereo compressor at a competitive price. It has a classy, effortless sound, is very forgiving of inexperienced hands when it comes to setting up, and the tube stage adds a useful degree of flexibility when you want to flatter as well as control. Having a digital I/O option is useful, but as the T‑Comp is essentially a compressor rather than a voice channel, you'll also need a mic preamp if you want to use the device to feed a soundcard while tracking. The digital output I/O is probably more useful when you want to compress a mix on its way from a DAT tape or CD‑R to the computer during mastering.

As with so many sectors of the project studio arena, the compressor market is extremely competitive, and there are many excellent British brands to choose from. Nevertheless, Mindprint have managed to archive a favourable price/performance balance as well as making their gear look nice, which is more important than many users care to admit. Check it out — I think you'll be pleasantly surprised.

Fitting the digital I/O option is extremely simple, providing you take the top off the unit as advised in the instructions. If you don't take the top off, there's no way to fit the ribbon connector unless the person who actually does it remains in the box! Once fitted, a digital output is always available at the sample rate set by the

rear‑panel switch, while selection between analogue and digital input is via a front‑panel button. I tested the digital output with my Emagic Audiowerk8 card and it worked fine first time.

A well‑designed, flexible compressor that sounds good on both mixes and individual sources.