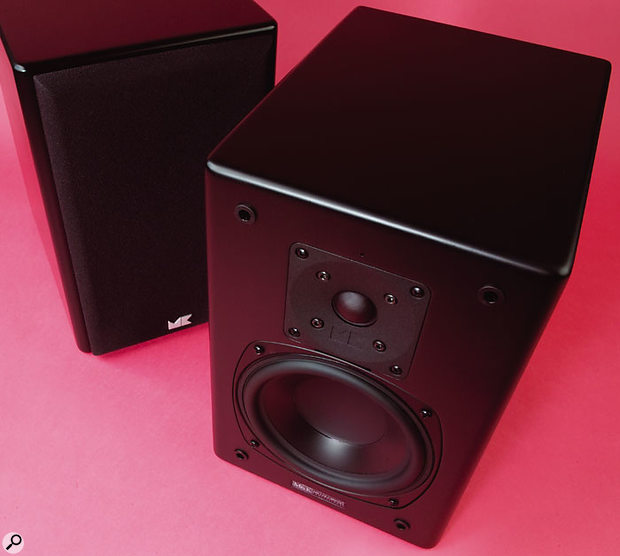 These new speakers from M&K let you switch between reflex and infinite-baffle designs on a whim.

The American professional loudspeaker company Miller & Kreisel have built up a very solid reputation for their studio monitors. The unusual-looking multi-driver M&K MPS2510 flagships (reviewed in SOS July 2001) have become firm favourites in many small film and TV dubbing theatres, as well as in surround-sound remixing applications. The latest addition to the MPS range is a compact two-way nearfield monitor called the MPS1611P, and this one does things a little differently from the norm too. The speaker is intended primarily for use in a 'satellite plus subwoofer' arrangement, although it can also be used as a stand-alone full-range speaker, albeit with a lower maximum SPL capability. The review was based on the MPS1611P monitors on their own, without a subwoofer.

The speaker cabinet measures a neatly proportioned 320 x 213 x 308mm (hwd) and weighs a fraction over 9kg. The cabinet is ported to the rear, but is supplied with a removable plug (of which more in moment). The driver complement comprises a one-inch soft-dome ferrofluid-cooled tweeter and a 6.5-inch polypropylene woofer, with the system designed to provide 91dBSPL at one metre for a nominal-level input signal. The maximum SPL is not given in the specs, but like all M&K products, the 1611P is a very capable design and it's easily able to provide substantial levels when used in its intended nearfield role.

The tweeter design incorporates an aluminium faceplate and bezel designed to help increase power handling and reduce dynamic compression effects at high volumes, while the rear of the tweeter is loaded with a proprietary 'transmission line' to prevent the sound projected from the rear of the tweeter being reflected back — something that would otherwise cause comb-filtering problems. The woofer has a generous magnetic motor design with full shielding. 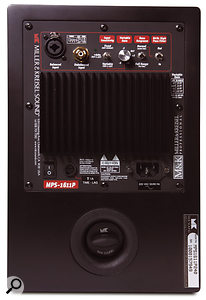 Under the speaker's rear control panel is the single port — the plug can be removed to increase the overall output level of the speaker.Photo: Mike CameronThe rear panel of the speaker forms a chassis for the electronics — a 100W amplifier to drive the woofer and a 50W unit for the tweeter. Both are described as using 'mixed bipolar DMOS technology' and quoted with 0.02 percent total harmonic distortion (THD). The input signal can be accepted either via a balanced combi jack/XLR socket or an unbalanced RCA phono socket. There is no input selector — both appear to be active at all times — but there is an input sensitivity switch. This three-position toggle offers options of 200mV (-12dBu or -14dBV), 1.23V (+4dBu), or a variable level set by an adjacent knob. The last covers a range of ±6dB relative to the +4dBu reference level. These figures all relate to the balanced input; levels at the unbalanced input are halved (in other words, the options equate to 100mV (-20dBV), 615mV (-4dBV) and the variable ±6dB swing around -4dBV. In practice, these options make it easy to find a sensitivity setting that suits pretty much anything likely to feed the speakers.

The remaining rear-panel controls are another pair of toggle switches that determine the low-frequency response of the speaker. The first switch is labelled Bass Response with Normal and Full Range options. In the first position the speaker has a claimed response of 45Hz-22kHz (±3dB), and in the second it extends down to 35Hz — although this low-frequency extension figure is based on the speaker being close to a rear wall. The last switch introduces an 80Hz high-pass filter, but this is only available when the Bass Response switch is set to Normal, and is intended for use when the MPS1611P is operating with an appropriate subwoofer.

Below the large heat sink area on the rear panel is the IEC mains input connector, a fuse holder, and the main power switch. An LED next to the phono input socket provides an indication that the speaker is powered and working — there is also a recessed green LED on the front baffle above the tweeter to aid in aligning the speaker's listening axis.

To Bung Or Not To Bung?

The MPS1611P can be used either as a sealed-cabinet (sometimes called 'infinite baffle') design, or as a reflex-cabinet design which boasts a higher maximum SPL capability. As shipped, the speaker's rear port is closed off with a tight-fitting foam bung mounted between metal end plates, the front having a knob with which to insert and remove the bung.

With the bung in place, the rear switch selector set to Full Range, and the speakers mounted in free space, the low-frequency response extends to 50Hz (-6dB point) with a very gentle roll-off below that and minimal phase shift. In Normal mode the response rises to 80Hz at -3dB, and this is the standard alignment for use with an M&K subwoofer (such as the LFE4 or LFE5). If the subwoofer doesn't have bass-management facilities, then switching in the 80Hz filter introduces a steeper roll-off (-6dB at 80Hz).

With the port bung removed the bass extension figures change minimally, but the character of the speaker changes dramatically, and it is capable of higher SPLs, as you might expect.

The MPS1611P is a sweet-sounding speaker with a precise and neutral character, and it is claimed to be timbre-matched to other M&K monitors, although I was not able to verify that. Transients are replayed with crisp detail and natural dynamics, and with the port bung in place the speaker delivers a smooth and well-balanced bass response that manages to provide a surprising amount of information on low-frequency signals. With the bung removed the character of the bass presentation changes noticeably, but it remains a well-behaved design overall. If the speaker was supplied only as a ported design then it would receive very favourable reviews, but as a sealed-cabinet design it gains a subtlety and smoothness in the bass region that really impresses. Personally, despite the lower maximum SPL, I much preferred the sound with the bung in place.

Set up about 20cm from a rear wall, the speakers delivered a surprisingly powerful bass response, benefiting from the additional bass loading effect of the rear boundary. As long as the speakers are placed well away from the side walls they can deliver wide, stable stereo images with reasonable depth and spaciousness. I found accurate aiming of the listening axis towards the 'hot seat' was important, though, but that is made very easy thanks to the recessed LED on the front panel. With the aid of an assistant to move the speaker, the increasing apparent brightness of the LED makes it very obvious when the optimum angle and height have been found. Used farther from the rear wall, the bass response naturally becomes less powerful, but the smooth extension remains and still allows the detail, tuning, and relative balance of bass instruments to be heard clearly.

Overall, these little speakers impressed me very much, delivering an accurate, tonally neutral sound with natural dynamics and transient details — even when delivering relatively high nearfield sound pressure levels. Although I was unable to try the MPS1611P with a suitable subwoofer during the review, experience would suggest that they will integrate very well, such is the controlled evenness of the bass response, in which case the combination would make a very competent and compact full-range nearfield monitoring system.

A compact two-way nearfield active monitor with the unusual facility to operate either as a sealed cabinet or as a ported design, the latter offering greater SPL at the expense of some bass extension and smoothness. The MPS1611P maintains M&K's characteristic tonal and dynamic accuracy, and is an impressive addition to the product range.