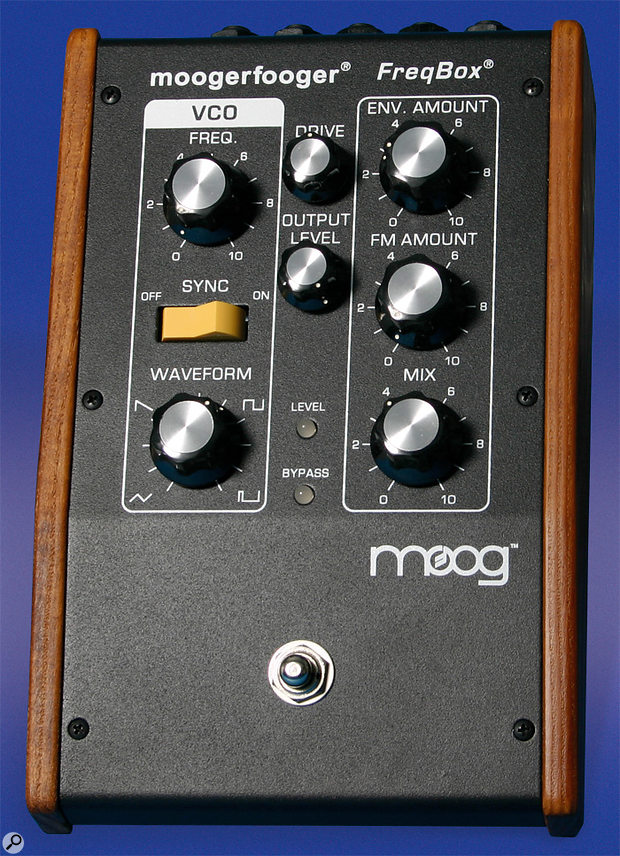 The MF107 Freqbox does what Moogerfooger pedals do best — offers lashings of good old–fashioned Moog weirdness.

The Moog Music Moogerfooger format has been established since 1999 and consists of solidly constructed guitar–style stomp boxes. Each little 'fooger has wooden end–cheeks, which proclaim 'oi, we're Moog!' and 'analogue classic' from their very core. Their extensive interfacing — sufficient to keep the most demanding modular owners jacking away happily — lives up to their musical heritage. Indeed, collectively the Moogerfoogers are a mini modular system, especially when mated with Moog's Control Processor expansion box and a Voyager or Little Phatty synth.

The latest addition to the Moogerfooger range is arguably the strangest to date. If challenging to pigeonhole, it is at least straightforward to describe: the MF107 Freqbox comprises an analogue oscillator with FM, an integral envelope follower and hard sync. With voltage inputs for all vital parameters and the Moog name on it, the Freqbox offers direct, unfussy musical interaction.

At the heart of the Freqbox is a Moog oscillator, its waveforms selected via a continuous knob — so much nicer than a switch. The smooth waveform transition begins with a triangle and progresses through sawtooth to square, culminating in a narrow pulse wave. The Frequency control is marked from zero to 10, representing a range of 25Hz up to 1.6kHz. I'd have preferred to see the real frequencies on there, but as the Freqbox is about working by ear, this is hardly a big deal. Should you feel the urge to exceed the base frequency range, a CV input on the rear is your means of applying external pressure to stretch the pitch from subsonic up to around 20kHz.

For such a compact pedal, there is a wealth of I/O. In addition to the 9V external power connector, the rear panel hosts a dense cluster of jack sockets. There are no less than five voltage inputs, one for each of the main panel controls.

Accompanying the signal input and mix output are the VCO's raw output and the voltage derived from the envelope follower. Connect the last to any of the Freqbox's own voltage inputs — for example, to the waveform CV — and hey presto: Pulse Wave Modulation (PWM).

If you're still wondering how this is leading towards a compelling audio encounter, it's time we considered how your input interacts with the Freqbox's oscillator, irradiating those familiar synth waveforms beyond recognition. Most of the fun starts with the built–in envelope follower, which generates a dynamic voltage used to modulate oscillator pitch and the output VCA.

Set the input sensitivity using the Drive control, scaled from instrument up to line level. With practice you quickly become adept at hitting the 'just right' spot for each sound source. As you increase Drive, an LED lights in green to indicate that a signal is present. When it turns orange you're at a typical working level, while red represents clipping. Don't fear clipping too much, because even constant clipping can sound pleasantly crunchy. It's almost as if the Freqbox thrives on it!

The more you boost Drive, the more you excite the envelope follower. Now, turn up the Env Amount gradually and you start to disturb the drone of the oscillator with both pitch and amplitude modulation.

To best understand the impact this has, I recommend starting with some fairly dynamic input such as guitar or drum machine. Opting for the latter, I set Drive fairly low, causing a single note to be triggered by the main energy component of the drum pattern, the kick. Increasing Drive caused additional note triggers to be generated by hi–hats and snare, and as I further increased Env Amount those transients began to trigger spurious pitch sweeps, an effect rather like scratching. For clarity, turning the Mix control fully clockwise lets you hear only the modulated oscillator.

These initial experiments piqued my interest as I noodled with oscillator pitch and waveform controls and pondered the variety of tones that resulted. Moogerfooging is a very hands–on experience: you tweak everything in sight, listen, tune, then tweak some more. For a guitarist, one or more expression pedals are strongly advised — unless you want to spend half the gig crouched on the floor!

Turning to the oscillator's Frequency Modulation facility, we slip into stranger waters. Analogue FM is markedly less precise and predictable than any digital synth implementation, and I have no choice but to describe it with the much–used term 'organic'. Freqbox FM catapults you into weird fuzzbox territory, from a mosquito–like rasp at high pitches right down to a flappy, cardboardy buzz when the VCO is tuned at its lowest. As before, the input signal acts as modulation source, lashing the oscillator mercilessly and generating all manner of sidebands (new harmonics) in the process. Already this isn't pretty — and cranking up Drive produces progressively brighter and even more complex fuzz tones. Indeed, by now my drum pattern had started to resemble a lo–fi computer game accompaniment, thrashing about madly and clipping like a conductor on a promise. 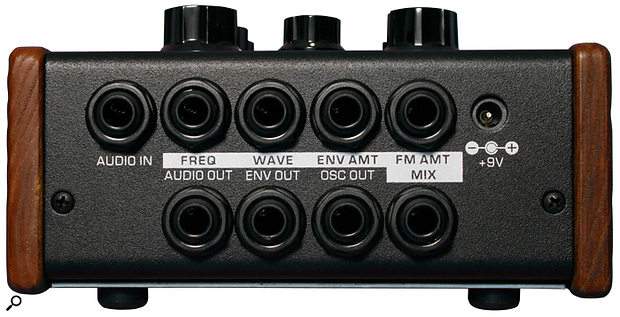 Moog haven't skimped on connectivity: the rear panel has a voltage input for each main front–panel control, the signal input, a mix output, a socket for the VCO's raw output and the voltage output from the envelope follower.

So far I felt there was potential for wackiness and grunge, but it was my next port of call that proved to be the important one. According to the manual, the primary drive in creating the Freqbox was to build a VCO that could be hard–sync'ed to an audio signal. Admittedly the accuracy of this process does depend on the clarity and complexity of the input, and the manual reminds us that the Freqbox oscillator isn't as stable and reliable under stage conditions as an oscillator from a Voyager. Nevertheless, here was the feature that tipped my save/spend balance irrevocably.

Feed a sync'ed Freqbox anything from bass lines to melodies and something rather wonderful happens: the rich, warm sync of an analogue oscillator magically pours forth. Surprisingly (to me, anyway), the Freqbox coped well with a variety of material, even finding a sympathetic pitch amongst guitar chords (a guitarist friend dropped by with his Telecaster for a private Freq show). Hearing sync solos generated by guitar strings had us both grinning like loons, and I couldn't help imagining a whole orchestra of these pedals.

Further guitar experiments hammered home the value of those CV inputs — for example, we quickly discovered 'space wah' by sweeping the sync'ed oscillator's frequency with a control pedal. My preconceptions about pitch tracking were hastily revised. Not that it's perfect — thank heavens — but, given a fighting chance, the Freqbox can act like a much better guitar synth than you might expect.

Having been pleasantly surprised by what a guitar could do, I felt it was high time to process some keyboards. Out came my trusty Roland SH101, and within seconds I experienced a 'killer app' moment (in computer jargon, a killer application is one that justifies the platform or operating system it runs on). I became thoroughly engrossed in playing ribald, searing sync tones — tones that wouldn't disgrace a Moog Prodigy — on my considerably less ballsy SH101. Pitch tracking was (mostly) stable over about five octaves and I found the occasional out–of–tune note more endearing than annoying. Later, I connected the SH101's CV output to the MF107's frequency input and discovered even smoother, more controlled tracking. Ker–ching!

Admittedly, other sources produced additional artifacts and tuning glitches, and this was especially true of the more complex sounds of digital polysynths, but I had pretty much expected that. I was impressed. The only down side I could think of was the potential for squabbles between keyboard players and guitarists over whose turn it is next for the 'little Freqer'.

Until this review, the Freqbox hadn't particularly caught my eye — not in the way Moog's low–pass filter and phaser pedals had, anyway. But though this newcomer might be freakier than its Moogerfooger siblings, it is no less deserving of the Moog name. That it comes with a manual so well written and full of ideas and explanations is just another testament to the fact that, to Moog, details count. Ironically, few items of studio gear have needed a manual less. If you can't find your way around a Moogerfooger without assistance you're probably still frowning at the sellotape on the box.

The MF107 is a doorway into a universe of rich sync sweeps, sizzling FM, footpedal–driven harmonic drones and a whole gamut of glitchy synth oscillator noises. With its extensive interfacing, simplicity and unique selling point, this Moogerfooger is genuinely only limited by what you choose to fire into it. I began by wondering just what an oscillator in a box could possibly do for me. I ended by ordering one for myself.

In a word, outstanding. A Moog oscillator in a box, capable of hard–sync'ing to external signals, accompanied by an envelope follower, plenty of voltage inputs and direct, effective controls. File under 'more psychedelic weirdness than a bucket full of LSD–gargling aye–ayes'!