In my experience, many SOS readers are, at least at some level, fairly technically minded and have an interest in how the technology they use works, especially in ‘classic’ instruments and devices. This book, Music Electronics (published by Transform Media Ltd), is designed to go a long way towards satisfying that ‘inner geek’ in all of us. It comprises around 900 pages in all, with 24 chapters divided across two similarly sized volumes. As you’d expect from its title, the British author Richard Brice gives a very good grounding in electronic audio principles, but the real strength and, for me especially, the main attraction of this book is the way it ties the theory down to practical reality, through countless real-world examples taken from virtually all of the classic pro-audio and musical equipment we know, love, and covet. 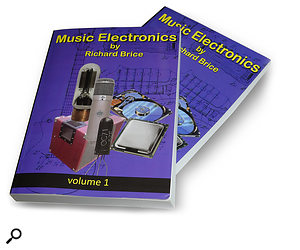 As is standard practice in works such as this, the first few chapters cover the basics including DC and AC electrical theory, and the concepts and physics of sound, hearing and acoustics. With that groundwork laid, the really interesting stuff starts in Chapter 4, with an examination of microphone technology. Here, Brice talks us through the circuitry of such classic microphones as Neumann’s U47, U67 and U87, AKG’s C12 and C414, and more modern designs like the Schoeps Colette series, highlighting various design innovations along the way. One minor oddity I found here is that, in a brief discussion of RF capacitor mics, the author chooses to describe a clever but non-commercial amplitude-modulated design by Peter Baxandall, rather than Sennheiser’s contemporary but commercially successful phase-modulated ‘MKH’ design. Moving on, a related chapter on microphone techniques is followed by four very meaty chapters on electronics proper, including the use of both valves and semiconductors in a wide variety of circuit topologies.

The first volume is rounded off with two fascinating chapters on the development of electric instruments (including the Telharmonium, Theremin, Ondes Martinet, Trautonium, Univox, Hammond organ, Hohner Clavinet, electric pianos and the Mellotron), and of electronic effects (such as EQ, reverb, time-delay-based effects, and dynamics processors). Again, the latter is made all the more interesting by its comparisons of the circuitry of classic compressors like the Fairchild 660, Urei 1176 and Teletronix LA-2A. The final chapter concerns electronic synthesis, both in terms of the people who developed the musical use of the classic instruments, as well as the underlying technology involved from modular analogue synthesizers through FM, sampling, wavetable and granular techniques.

Volume 2 opens with a chapter on MIDI and sequencers, before delving into the full range of analogue sound recording and replay technologies, while the following three chapters cover the whole gamut of digital recording, interfacing and signal processing in considerable detail. The illusion of stereo and surround-sound concepts, formats and systems are examined next, along with some of the known but often overlooked limitations and inaccuracies of such systems — much of which covers ground found in very few other tomes.

One of the most interesting chapters for me is Chapter 20, which covers the historical development of the recording console, again with illustrative circuit diagrams for the early EMI REDD and TG consoles, as well as the much more sophisticated designs that followed from the likes of Helios, Trident and Neve. Next, a chapter on power amplifier technology explains all the common amp ‘classes’ and the practical issues of stability and protection. This leads naturally into guitar amplifiers, with examinations of many classic Fender, Marshall, Vox, Gibson and Roland designs. The penultimate section logically moves on to loudspeaker designs in all their myriad forms, while the final chapter might initially seem a little out of place, covering the broadly related areas of film, video and synchronisation. All the different video formats, past and present, are explored briefly, along with digital video compression concepts and, of course, the ubiquitous longitudinal timecode.

Although absolutely crammed full of fascinating information, Music Electronics remains very readable and understandable throughout, and I found myself engrossed for hours at a time. The one criticism I’d level is that, in the paper edition I read, a lot of the images and diagrams were of dubious quality and lower resolution than I would have liked (especially some of the schematics), which made examining the detail rather frustrating — I don’t know if this is also the case in the Kindle version. However, that minor hindrance shouldn’t detract from the value of this impressive work, and every reader’s understanding of the extraordinary world of audio electronics will undoubtedly improve markedly. Their inner geek will be sated for a while too! Hugh Robjohns