NI have updated Maschine — so is it now all we thought it could be? 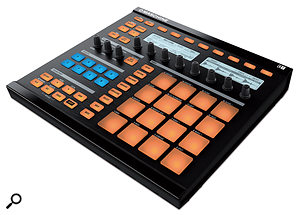 When Native Instruments released their hybrid hardware/software production workstation, Maschine, last year, I greeted it with qualified enthusiasm, saying it was "so close to being brilliant”. In the review (SOS June 2009), I applauded how NI had captured the hands‑on workflow of the drum machines and MPCs that are Maschine's inspirations, but also noted a few rough edges and feature gaps, and said I looked forward to seeing Maschine mature over time.

A year on, the free v1.5 software update (the biggest release since the initial version) addresses some of the issues I flagged in the review, and includes numerous other improvements.

Possibly the most common complaint about Maschine was that it was a sealed environment: Maschine's internal sequences could only play samples loaded into Maschine. Those hoping Maschine would be a next‑generation Music Production Centre, which could serve in place of a DAW when necessary, were disappointed that it could not drive external hardware synths or drum machines. This has changed in v1.5.

Every sound slot in Maschine 1.5 can be switched between Sampler and MIDI Out modes. Each slot can be used to drive an instrument in Piano Roll mode, or you can use a group of 16 sounds in step/pattern mode to drive a drum machine.

Maschine has its own MIDI Out port, and also recognises other available MIDI ports connected to your computer. However, Maschine simply outputs the same thing on all enabled ports, so you've only got 16 channels to play with. This is a limitation, but will probably suffice for the majority of users.

As well as driving external MIDI gear, this new functionality extends to other virtual instruments and plug‑ins. I was able to sequence instruments in Pro Tools, Live and Reason using an inter‑application MIDI bus. This worked best when running Maschine as a stand‑alone application alongside other software. 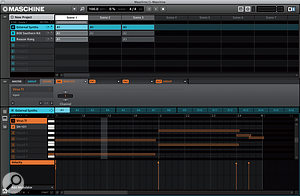 Maschine now has on‑board destructive sample-editing capabilities, making it much less likely that you would turn to dedicated sample-editing software. This is supported by one the nicest new features: hardware-controlled zooming and scrolling. Waveforms are displayed in the right‑hand controller display, and the view can be zoomed or scrolled with two knobs. The on‑screen display follows seamlessly.

This idea has been extended to other areas of the user interface. Holding the Navigate button on the controller now brings up controls for zooming the Scenes and Pattern views on‑screen, plus 'X' and 'Y' knobs for scrolling horizontally and vertically. This answers one of the complaints from our original review: that you needed to pick up the mouse to fit your patterns into the viewer.

Back to sampling, and Maschine has upped its game as far as slicing is concerned. REX files are now supported, filling another of the v1.0 holes. REX loops are handled in the same way as any other sliced loop: the slices are mapped out in a Sound Slot (where they can be played from the pads) and a piano‑roll sequence is automatically generated to re‑sequence the original loop.

When slicing your own samples, there is now a new mode called Split that joins the original Grid and Transient Detection modes. Split simply divides an imported sample into a set number of slices. A slice editing system now lets you audition individual slices, manually adjust the slice points, and remove unnecessary slices. As usual, this can all be done from either the control surface or the software, and combined with the new zoom/scroll controls, it's a really nice way to work.

One of the biggest complaints from the original review was that kits and patterns could not be loaded independently, so you couldn't record a pattern and then audition it with different kits. Version 1.5 fixes this issue, and you'll now find a toggle switch in both the software and hardware sound browser pages that breaks the link between patterns/sequences and sounds.

Talking of sounds, there are a few additions, in particular quite a few new Instrument patches, and a collection of NI's Abbey Road '60s and '70s drum kits. There's also a handful of new 'Urban' kits. Unfortunately, the library hasn't gained new loops, an area I flagged as weak last year.

Version 1.5 brings more in the way of on‑board sample-editing capabilities.

Maschine 1.5 now has more functionality when used as a plug‑in within a DAW. Some users found themselves wanting to run the Maschine plug‑in for its sounds and effects, but use the host's own MIDI sequencing tools instead of Maschine's. It's simple to play Maschine from an external MIDI controller, but to use Maschine's own pads required switching the device into a MIDI Controller mode. It was a bit fiddly.

There's now a new option to quickly set up any group to respond to MIDI appropriately for either a drum kit or multiple loops/instruments, after which Maschine will generate MIDI notes when a sound is played from the pads (or sequencer). This MIDI data can then be captured to a MIDI track. The result is that you can quickly record MIDI sequences into your DAW from Maschine's pads, without switching modes.

The setup for this varies from DAW to DAW. I tested it with Live and Pro Tools. Pro Tools was problematic, as it disallowed the necessary routing, judging it to be a MIDI feedback loop. It worked in Live, although required two separate tracks, one for MIDI and one for Maschine. Also, the workflow broke down a bit if you tried to use more than one instance of Maschine, but worked fine if you sequenced sounds in one Maschine plug‑in from multiple MIDI tracks.

Another new option when working within a DAW is to drag and drop patterns from Maschine into your DAW's tracks as either MIDI or audio. Simply click on the new cross-hair icon in the pattern section, and drag to a track. This worked perfectly for MIDI, although at first my audio was getting bounced out at the wrong tempo in both Live and Pro Tools. Eventually, I found a forum post that explained an obscure Export setting that needed to be set to make this work. It's also a bit long‑winded having to go into a menu to choose whether dragging produces MIDI or audio. Still, it's a powerful feature.

Probably the main complaint in the original review was the limited ability to capture performances on Maschine in a DAW, beyond basic notes. There was no MIDI CC or automation support. It's tricky to implement this on complex plug‑ins like Maschine, as the modular design means that no two instances are the same. NI have now tackled this problem in the same way as they did with Kore, by adding user‑assignable Macro knobs that can be mapped to MIDI CCs and/or picked up by your DAW's automation system. Each group now gets eight Macro knobs, which can be assigned to any parameter within the group.

Probably my biggest gripe, though, was the inability to record an arrangement in real time. Maschine's Scene system remains largely the same, with up to 64 Scenes that simply recall a pattern on each group. A previous update (v1.1) added the ability to sequence scene changes within your DAW using MIDI notes. Originally this was achieved with Program Changes, which was awkward if you wanted to record the arrangement on the fly. However, I'm disappointed that you still can't trigger Pattern changes from MIDI. For me, the only way to really capture a real‑time performance from Maschine is to record its audio output to your DAW, and that's a shame.

As I hoped in the original review, Maschine has seen strong development since its initial outing, and a number of the most obvious gaps have been filled (for example, MIDI output and independent Kit/Pattern loading). Maschine was already a fantastic stand‑alone instrument, and the v1.5 update adds a number of features aimed at better integration with DAW hosts. There are now several different approaches you can take, each with some powerful possibilities. While this means you can figure out your own way of working, there seems to be confusion among users about which way to go and how to make it work, and perhaps a more unified 'workflow vision' from NI would be welcomed.

That said, a year on I still find myself going to Maschine as my default instrument and controller — it's addictive. Maschine is still the one to beat.

Feature Highlights At A Glance

Also included in the v1.5 update:

Version 1.5 adds a number of welcome features and fills some of the more obvious gaps in Maschine's armoury, and it's a free update. This represents some serious progress.

What Do Mastering Engineers Actually Do?
4 days 15 hours ago.