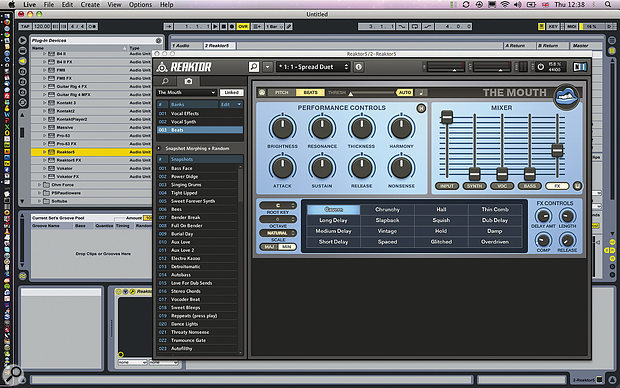 Clicking on the button below one of the five faders brings up the editing controls for that section of The Mouth (bottom right), plus a selection of preset settings.

The Mouth has an insatiable appetite for sound — and turns everything it eats into sweet music!

The last time anyone sent me something on the basis that it was 'fun' was when I was given a Slinky for my sixth birthday. It didn't disappoint. In fact I spent the next 10 years of my life tirelessly chasing it down the stairs, much to the detriment of my GCSEs. I then made the mistake of buying my own 'fun' thing on my 17th birthday — a PlayStation — much to the detriment of my university degree. Having spent the ensuing decade avoiding human relationships in favour of following Lara Croft around a dungeon, you could therefore understand my trepidation when The Mouth arrived in my inbox, branded 'fun' by its creator Tim Exile.

Putting reservations about a return to nocturnal life to one side, I decided to throw caution to the wind and see if Mr Exile's claim was justified. And so, within half an hour (unless you are on a dial‑up connection, in which case maybe add another year to my estimation) I had downloaded The Mouth and a version of NI's Reaktor Player, and before I knew it, I found myself tooled up and ready for fun. The Mouth is a relatively small download, at just over 21.1MB, but Reaktor Player is about 10 times this size, and you will need either it or the full version of Reaktor to run The Mouth. You can open either version as a stand‑alone program or as a plug‑in within whatever DAW you are using. The Mouth appears in the side‑bar of the Reaktor interface, at which point you just drag it into the main area to activate it. 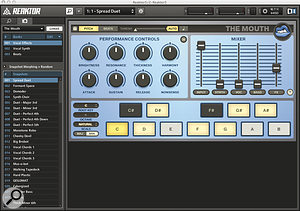 So what is The Mouth? Well, to put it simply, it's like having a computer‑generated version of Beardyman in your studio. Instead of you having to play a keyboard or hit a drum machine, The Mouth will generate all those effects using just your voice as a source. If you sing as well as Milli Vanilli, don't worry: The Mouth can also tune the vocal and harmonise it, as well as converting any audio signal into a synthesizer part (which, let's face it, is probably the best place for a voice like mine anyway). The incoming audio signal is tuned to a selected musical scale or notes from a MIDI device, and this tuned signal is then used to trigger the synthesizer which, in conjunction with the gate parameters, adds additional melody and harmony.

The Mouth has two modes of operation: Pitch mode and Beats mode. In Pitch mode, it analyses pitch and tunes the incoming signal to the closest selected musical scale or MIDI input. You can use either control method to force it to play an alternative note or scale, or you can let it randomly generate chords and harmonies of its own volition. In essence, what this means is that The Mouth will provide a pitched output no matter what audio signal you put through it. In fact, it will put out five different outputs, which can be blended using the faders in the Mixer section: the input signal, a synth, vocoder, bass and effects unit. Even if you can't play the keyboard, you can put in one sound or even a spoken word, and The Mouth will start generating music on whatever scale or key it senses is 'closest' to that sound. If your keyboard playing is up to putting a few chords into it, you can force it to play along with whatever keys you hit.

Once you've come up with something you like, you can then manipulate it in a number of ways, as The Mouth comes complete with its own performance controls, in the form of eight pre-defined macros, which can be used to alter the sound and amplitude envelope of the output. As well as level faders, the mixer section also contains a control button for each part, which reveals up to five additional controls, providing extra scope for manipulation.

In Beats mode, meanwhile, The Mouth uses the transients and rhythm of incoming audio and — get this — turns them into music! If you're not sure what I'm on about, in a nutshell, it converts drum kicks and low‑frequency transient triggers into low notes, while snares and higher‑frequency transients become higher notes. And it sounds really brilliant. Suddenly, it was like I was standing at the top of the stairs again, about to watch my Slinky walk unaided down to the front door for the very first time. Magic!

Needless to say, I spent the next two hours obsessing over this, and in my humble opinion, this is really where The Mouth comes into its own. Not only can you generate music out of a simple drum sample, but you can generate music that perfectly mirrors the beats you originally sampled — far more perfectly than if you were trying to match the two manually. The effect is of a bizarrely perfect‑sounding record, generated from nothing other than drums, which is almost absurdly easy to use, and rather hypnotic once you get going with it. I loved it.

The key parameter here is the gate threshold, which allows you to let more or fewer of the rhythmic transients in your drum beat into the process, and provides a very user‑friendly way of controlling things. I kept returning to the 'Singing Drums' preset, which sounded particularly awesome as I simply increased and decreased the threshold. I'm probably still using it as we speak, which is clearly good press for The Mouth, but not good for me leaving the house ever again.

So, in summary, what do we think? Well, once you get your head around the slightly cryptic interface (it's definitely a sound idea to read the manual for this one), The Mouth can generate some great sounds for vocals, drums, bass and synths. The automatic pitch‑following option with tunable scale makes it considerably quicker to set up than a normal vocoder, and in turn creates some really interesting new pitch variations in a vocal. A small down‑side for me is the requirement to use the plug‑in within Reaktor. I'd prefer it to be a stand‑alone plug‑in, ideally, but that's a small thing, and it hasn't stopped The Mouth replacing the Logic vocoder I've tried previously.

And Tim Exile was right: it really is good fun to use. It's reasonably user‑friendly and is worth a nose if you aren't as strong on writing melody as you are on beats — or if you don't have a huge amount of equipment and you want to experiment with making an album out of effects generated only by your voice. I'm sure at some point someone will try this.

Probably me. It was about time I replaced Lara Croft & The Elephants Of Doom with something.

The Mouth is unique, easy to use once you've got past some unfamiliar controls — and yes, it's fun!