The front panel includes everything you'd expect from a Neve EQ, with an identical set of controls for each channel. The Q setting is switchable on the outer bands and fully variable for the two mid bands.

Combining the classic Neve sound with a software recall facility, this EQ offers the best of both worlds.

The Neve name is synonymous with high-quality analogue audio processing, whether as part of a traditional mixing console or as outboard equipment. Over t

he last few years, AMS Neve have been developing a new high-end range of outboard processors derived from the hugely impressive 88R console. The 88-series outboard modules currently comprise the 8801 channel strip, the 8802 dual-channel dynamics processor, the 8816 summing amp (reviewed in SOS August 2006) and the partnering 8804 16-channel fader panel. The latest addition to the fold is the 8803 dual-channel equaliser, which was launched last year at NAMM.

The 8803 is a neat 1U rackmounting unit, which extends roughly 205mm behind the rack ears. The rear panel carries combination XLR/TRS sockets for the balanced line-level inputs, and both XLR and separate TRS sockets for the balanced line-level outputs. There is also a square B-type USB socket (more on that in a moment), an eight-pin DIN socket for the external power supply, a fuse-holder, and a recessed chassis earth-lift switch, providing a ground connection from the mains earth, or via a chassis terminal on the rear panel. The external power supply is common across the 88 Series range and is a typical switched-mode lump, with IEC input socket accepting 100-250V AC, and a flying lead to connect to the 8803 case.

Internally, a small daughterboard runs vertically behind the front-panel controls, while a large motherboard is mounted at its mid-point and extends all the way to the back of the case. The input socketry is mounted on a third, smaller circuit board, and various ribbon cables run under the boards connecting them. Almost all components are surface mount, and most of the audio op-amps are the venerable NE5532s.

The technical specifications are as impressive as you might expect, with a maximum output of +26dBu, bandwidth between 10Hz and 35kHz (at the -0.5dB points), distortion below 0.006 percent and noise below -80dB.

The front panel is typically Neve, with classic fluted knobs in muted shades of red, blue and grey: red for gain, blue for frequency and grey for Q (or bandwidth). The two channels are identically equipped and start with a global bypass button, which illuminates yellow when the equaliser is active. This bypasses the four-band EQ section, but leaves the input/output buffering in place, along with the high- and low-pass filters. A rotary trim control spans ±20dB, with a firm centre-detent at unity gain. A pair of LEDs indicate the presence of signal above -30dBu (green) and when the signal is within 1dB of clipping (red at 25dBu). 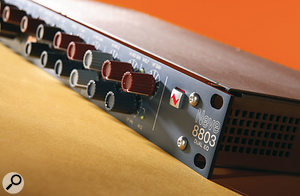 Next is a pair of 12dB/octave high- and low-pass filters. Turnover frequencies are adjustable between 30 and 300Hz for the high-pass and between 1.5 and 18kHz for the low-pass filter. Both controls have press-switch action to put them in or out of circuit, and red LEDs adjacent to each control illuminate when the controls are active.

The main equaliser section is a classic Neve four-band design, with two parametric mids and switchable shelf/bell top and bottom bands. The gain range for all bands is ±18dB, with strong centre-detent positions for zero gain. Pressing the gain controls for either the low or high bands switches their modes between shelving and bell responses, with a yellow LED to show the shelf mode. The low-section frequency control spans 33-440Hz, while the high-section frequency range is 1.5-18kHz. With a section switched to bell mode, pressing the frequency control knobs changes the bandwidth between a reasonably gentle Q of 0.7 to a slightly more surgical 1.8, with yellow LEDs indicating the high-Q mode. However, in shelf mode the switch toggles between normal and resonant turnovers, with a slight boost or dip around the selected turnover point in the resonant mode that makes the effect more obvious.

The lower-mid band is a typical parametric affair, with the frequency control spanning 120Hz to 2kHz and the Q control ranging from a very broad 0.3 to a clinically narrow 7. The higher-mid band is equipped similarly, but the frequency range is 800Hz to 9kHz. Clearly, there is a very generous overlap between all bands. There are no switch functions in either of the mid bands.

Finally, to the far right of the panel is a back-illuminated on-off switch, which shines through Neve's 'N' logo.

I mentioned the USB socket earlier. This might be an unexpected feature of an analogue equaliser, but one of the key features of the 88 series is the inclusion of a control store/recall facility, which is accessed using a PC or Mac hooked up to the appropriate units via USB. 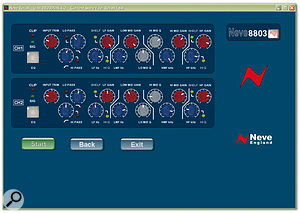 The recall software, with easy-to-read graphics, gives this unit an advantage over most of its hardware competitors. Settings may be stored on Mac or PC.Photo: Mike Cameron

The software (currently at version 3.01) is provided on a CD with the electronic user manual, but the latest version can be found on the AMS Neve web site. I loaded it onto my desktop PC without any problems and it found the 8803 straight away. The graphics are a little large and clunky — they reminded me of an Early Learning Centre game, although perhaps I shouldn't expand on that! — but once you've selected the appropriate unit there are big buttons for saving the machine's settings, or loading them in from the chosen location on your drive. The data is a simple text file, storing numerical values for each control. When recalling settings, you choose a file, and then a graphic of the machine's front panel appears. Only those controls that differ from the saved settings are shown in current positions, with aiming markers for where they need to be. As you adjust the controls, their current position is updated in real time, and when you match the saved position the control disappears from the graphic. To the right is a large display of the control currently being adjusted, with the same target position, but I found using this a little confusing, as it changes automatically to the next mis-set control once the previous one has been matched, and if the next one also happens to be the same type (Gain, Q or frequency) it's not always obvious that you need to move on to another control.

Nevertheless, this semi-manual recall system works accurately, and it will enable exact settings to be recalled for specific projects with ease. Just make sure you save the recall files in the appropriate project data folder!

The design of the EQ stages in the 8803 is apparently based on the original Neve 8108, but with important enhancements, mainly to the ranges of the frequency and bandwidth controls. Sound-wise, the equaliser was all I expected, with a smooth, flattering sound that handled huge dynamics with considerable ease. Using the 8803 as a simple line driver was impressive enough — the analogue stages are very competent and seem to add an analogue gloss to digital sources just by being in the signal path.

The equaliser itself is very musical and clearly optimised for creative enhancement and shaping — in the Neve tradition — rather than clinical surgery of a forensic nature. Having said that, it performed very well when asked to reduce or remove unwanted resonances and booms in acoustic recordings, and to add gloss and sparkle to a choir recording.

This is a sophisticated and powerful device that screams 'professional tool' at the user. You are expected to know how to use the facilities provided to get good results, and it takes a little time to become familiar with the rather unusual filter-switching modes. But perseverance provides exceptional results.

For mastering or master mix sweetening applications, a true stereo mode would have been nice, but in fact I didn't notice any real problems in hand-matching EQ settings between channels. The Recall facility provides a neat, simple and practical way of integrating high-quality analogue outboard with modern digital workflows, and that gives the 8803 (and other 88-series products) a distinct advantage over other high-end outboard products in this modern age.

There are not many high-end analogue products around (yet) that have store/recall facilities. One of the obvious direct competitors is the SSL X-Rack system, which features a similar facility that's based on SSL's Total Recall system. The data can be stored within the rack itself, or remotely on a computer system or on a compatible SSL console. The bespoke EQ module for that rack is a four-band design similar to the 8803 — albeit with classic SSL parameters and features.

A sophisticated and extremely capable dual-channel equaliser, in the classic Neve tradition, with a useful semi-manual control reset facility.