This addition to VSL's grand orchestral project contains flute, clarinet, oboe, and bassoon ensembles of three players, exactly duplicating the formula instigated by Miroslav Vitous in 1992. It's taken VSL a while to catch up with the Czech innovator, but given that the company currently has 1.3 million samples on its database, the delay is entirely understandable! 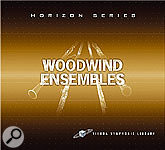 If I had to sum up this library in one word, the word would be mellifluous — the liquid, flowing effect stems in part from the players' beautifully smooth delivery, but the most significant factor is the Performance Tool MIDI application (explained in SOS May 2003), which makes legato performances sound absolutely smooth and lifelike. Although these woodwind ensembles don't play runs, grace notes, or flutter-tongues, there's still plenty of musical choice. Sustains (played with little or no vibrato) are looped, and shorter notes of three different durations each have a complete alternative set of samples. VSL provide their usual large menu of changing-dynamic performances, and some programs allow users to control the release triggers' level with the mod wheel, a handy facility which for some reason failed to work with the flutes' staccatos.

No-one with a functioning pair of ears could fail to enjoy the three flutes' long notes — they are sumptuous, tuneful, and sound great playing chords. The bassoons' restrained but poignant choral-sounding sustains also sound excellent, and their staccatos are lively and colourful. Engaging the Performance Tool for the ensembles' performance legatos has a fabulous effect; fast melody lines on the clarinets' legatos coalesce into a liquid, quicksilver swirl of notes, while the rarely-heard timbre of three unison oboes evokes the wailing of Middle Eastern reeds. Although setting up the Tool can be a pain in the derrière (pardon my English), its galvanising musical effect repays all the effort.

VSL libraries have hitherto avoided chords, but this title introduces clusters of three adjacent semitones. Beautifully recorded at two dynamic levels, they can sound marvellously creepy, or chaotic — play them chordally, and the resulting pandemonium would make even Harrison Birtwhistle blanch. Trills (played by all instruments except the bassoons) create a vivacious, celebratory shimmer reminiscent of the opening of Stravinsky's Petrouchka. Only one minor criticism: as in VSL's Pro Edition, the clarinets 'speak' too slowly for my taste, though their sforzando deliveries do attack strongly.

I suspect the woodwind players recorded a lot more material than the 6GB presented here, so we can probably look forward to hearing more of their performances in some future VSL release. In the meantime, if you want to acquire four extremely classy, luxurious-sounding woodwind sections in one convenient and not overpriced package, go for this one. Dave Stewart

French horns are the new violins — everyone wants a bigger, more grandiose horn-section sound, and companies have been falling over themselves to supply it. Up till now, VSL might not have been samplists' first port of call for massive-sounding horn ensembles, but their pointedly titled Epic Horns could change that. Although the samples lack the built-in concert-hall ambience found in other libraries, the eight horns' sheer sonic weight and richness of timbre generate their own size and grandeur. Load the triumphantly brassy, fanfare-like schmett (blaring) samples, slap on some reverb, and voilà! — there's that heroic Hollywood orchestral horn sound that media composers crave. 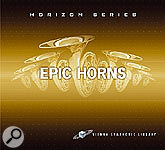 VSL say that recording the instruments' 1400 or so performance legatos was the biggest challenge they've faced so far. (That's hardly surprising; one can imagine tempers beginning to fray somewhere around take number 1250.) Hearing the results, however, improved my temper considerably — quite simply, they sound magnificent. Playing these deliveries under the control of VSL's Performance Tool is like a delightful waking dream in which stumbling, one-finger melodies are transformed into fluid, soaring flights of Wagnerian majesty. (Sadly, when working with samples, the reverse process usually applies!) The legatos come in loud, quiet, glissando, and fast-glissando flavours; the glissandos are very effective for dramatic orchestral swoops, and you can also use them to glide freely (range permitting) from note to note, like a symphonic super-synth.

As with the four horns and solo horn in VSL's Pro Edition (reviewed in SOS March 2004), a huge collection of performance styles are guaranteed to add movement, detail, and dynamic interest to arrangements. Also included are a set of simple, quietly played major and minor chords with a lovely warm brass-band-like sound — very nice, though I wish some open fifths had also been included. The chords and the horns' long notes (both looped) are very effective for pads, the staccatos sound great, and the forceful, blasting sforzandissimo samples provide huge energy and power. Unfortunately, the mod wheel 'release control' facility wasn't working on some instruments in the Dynamics folder, but that didn't spoil my euphoria.

This is a title that I know I'm going to use in the future, and I have no hesitation in awarding it five stars. Considering the musical expertise, time, energy, and financial investment involved, it seems fairly priced, and VSL have (as always) striven to cover many expressive musical angles. To be honest, it's hard to imagine a set of samples sounding much better than the six thousand or so featured in this epic 2.7GB venture — buy it, learn how to use the Performance Tool, and you'll be well sorted for ensemble French horns. Dave Stewart

If you like the sound of things being beaten with hands or sticks, then Percussionism from Loopmasters might be right up your street. The list of percussion instruments used is pretty extensive: as well as the more usual tambourine, shakers, congas, and bongos, more exotic instruments such as berimbau (a bow with a single steel string), djembe, bougaraboo (like the djembe, only taller) and bendir are included, amongst others. The single CD is packed with some 550 REX 2 loops, over 650 WAV loops, and a further 1300 single-hit WAV files. 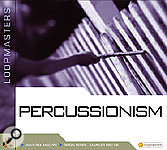 I experimented with the WAV loops and single hits in Sony Acid Pro v4. These are split into tempo groups ranging between 60bpm and 160bpm, but, provided that the usual limits are observed, they can easily be time-stretched to mix and match between the original tempos. As well as individual instrument loops, the collection also includes some full-mix and processed loops. All the instruments seem to have been both well played and well recorded. The various drums do not appear to have been over-processed, so there is plenty of attack to things like the conga and doumbek loops, for example. In terms of balance, there seem to be marginally more 'shaken' than 'beaten' loops — I counted over 90 basket or egg-shaker loops, some 60 tambourine loops, nearly 50 shekeree loops, 50 cabasa loops, and over 100 jinglestick or rainstick loops.

Given the diverse set of instruments, it is not surprising that these samples could be used to add the flavour of a whole range of musical styles. As well as the more obvious Latin, African, or Eastern influences, however, a good number of the loops could easily work in a jazz, funk, or pop context. I often find that starting a songwriting session with a few percussion loops provides an inspiring alternative to some straight drum loops and, within a few minutes of mixing and matching within this collection, I was itching to pick up a guitar or bass to play along. There is also plenty here that would work when writing to picture if the music required just an element or two to suggest an Indian, African, Latin or Egyptian influence.

For those who like to build their own sampler patches, the huge number of single hits provide plenty of scope for experimentation — more than 230 bougaraboo hits ought to be enough for all but the most dedicated of percussion samplists! Most of the instruments are sampled less intensively than this, but there is still plenty of variety for most. In the main these single hits are also well recorded, although a little more level on some of the samples would not have gone amiss. This one minor criticism aside, Percussionism is a job very well done and, for a single CD, packs in plenty of content. Good value, good quality, and inspiring — now that can't be bad can it? John Walden

This library provides you with a church organ for your computer (vicar not included). When we think of pipe organ, we tend to imagine a big, overbearing racket grinding out doomy Gothic dirges in nightmarish, Hieronymous Bosch-esque scenes of horror, degradation, and despair — well, that's how I think of church weddings anyway. Happily, this instrument, recorded at St Stefanuskerk in Moerdijk, Holland, goes well beyond the Hammer Horror stereotype and offers a varied and attractive sound.

PMI have gone about this project in a very sensible and organised(!) way. The organ's three manuals (called Main, Swell and Positif) and pedals each contribute between five and eight individual stops, giving a total of 28 chromatically-sampled presets. The manual presets span four octaves from 'C' to 'C', while the pedals have a 2.5-octave range from 'C' to 'F'. All the samples are perfectly looped, and the church's glorious reverb — a big part of the organ's sound — is superbly reproduced by release triggers.

The 28 single stops (which one can use alone, or as building blocks to construct layered sounds) cover many different timbres, some of them extremely attractive. The Principal 8 preset is one of the strongest: a classic, simple, and contemplative organ sound ideal for soft hymn accompaniment. Flutey, wooden-pipe stops like Rohrflotje 8 have an innocent, child-like quality, their soft, breathy tone and chiffy attack making them sound almost like low panpipes. By way of contrast, the Trompet and Dulcian presets are triumphantly reedy and buzzy, the latter's 16-foot pipes sounding like an electric contrabassoon. High-pitched, metallic-sounding Mixture stops (which link each organ key to two or three pipes of different pitches) sound the brightest of all, blending fifths, octaves, and major tenths into a star-burst of harmonics.

For bigger, more grandiose sounds and horror film soundtracks, users may prefer one of PMI's ten 'combination' instruments. Offering full organ timbres, powerful pedal tones, and one particularly apocalyptic racket called Tutti, these were created by layering up to eight single-stop presets and resampling their stacked notes. (The combination samples are unlooped, but as they last fourteen seconds that shouldn't be too much of a problem.) The library's 'multis' also create rich-sounding, multi-octave textures by layering four single stops within one instrument, each layer offering its own user-programmable volume level.

A pipe organ is a wonderful thing, but you wouldn't want one in your bijou Battersea residence. PMI's recording of this air-driven marvel provides an affordable, space-saving solution. There is one complication — a 50MB Krumhorn preset was inadvertently left out, necessitating a potentially lengthy download from PMI's web site — but once you've negotiated that hurdle, you can settle down and enjoy this 2.67GB library, free from religious guilt. Dave Stewart