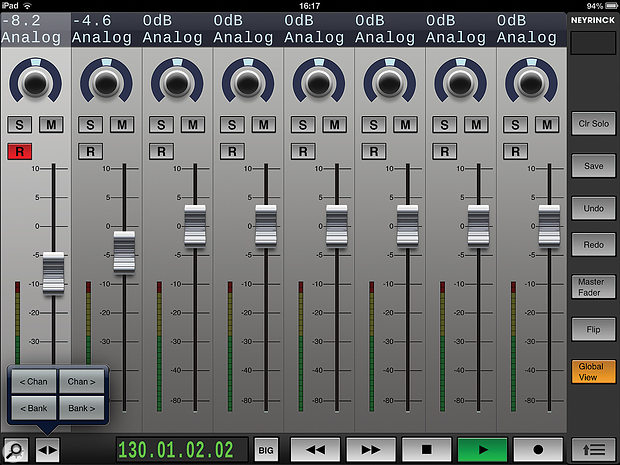 Neyrinck's V-Control Pro aims to be a universal controller for all the most popular DAWs and supports Logic 9 Pro, Pro Tools, Cubase/Nuendo, FL Studio, Tracktion, Studio One, Reaper, Reason, Ableton Live, Final Cut Pro 7 and Sonar. At £34.99$49.99, V-Control Pro is one of the more costly iPad DAW-control options, although there is a free version with fewer features.

V-Control communicates with your computer via Wi-Fi, and before you get started you'll need to install Neyrinck's Ney-Fi software on your Mac or PC to get it and the V-Control talking properly.

Once this is done, setup is pretty painless. A settings button allows you to select which computer you want to talk to and which of the supported DAWs you're using. Just tap the DAW name in the list and you're done. My initial tests were undertaken using Logic v9.1.7 on both a Macbook Pro running Lion and on a Mac Pro running Snow Leopard. I also checked the operation with Studio One 2 and Pro Tools 10.

As with most controller apps, the majority of the screen is given over to eight channels comprising faders (with metering), a rotary control, mute, solo, input monitor and record buttons. The rotary controls operate as pans or as sends, while a 'Win' button opens and closes Logic's Mixer window when in Logic mode. A Group Suspend button toggles fader grouping on and off. Track names are displayed at the top of each channel, and tapping the automation box below opens up a menu of automation modes.

Transport controls inhabit the bottom of the screen and include a button to open a sub-window with extra transport buttons for Punch, Bars, SMPTE, markers, and so on. Tapping the fast-forward or rewind buttons briefly moves the cursor one bar at a time, while holding them down causes the cursor to scroll until you let go. The button with the two arrow heads to the left of the display opens up another small sub-window offering Bank and Channel buttons, though you can also use a two-fingered swipe to flip between banks of eight channels. Most of the key functions are the same with different DAWs, although there are slight changes in the appearance of the GUI to match the peculiarities of whatever DAW is currently being used.

Other buttons to the right provide All Mute Off and All Solo Off functions, and below these are buttons for capturing loop start and end points and auto punch-in start and end points. There are also save, undo and redo buttons, plus a further button that is used to open the App's Multi-panel window. The Multi-panel window has four display options, the first being V-Window. This displays your DAW screen and gives you a postage stamp-sized version of the current window and also of any open plug-in window. Tap your choice of window to display it at full size. You still have the transport buttons at the bottom, so this is a useful view for navigating the song if you're starting a record pass from a drum kit set up at the other end of the studio. Plug-in windows can also be enlarged, giving you tactile control over elements such as EQ curves.

At the top left of the Multi-panel window is another button that shows the four display options and gives you access to a very thorough user guide. The four display options are the V-Window just described, as well as Edit, Plug-in and Instrument. Edit provides panels for automation writing and filtering and copy and paste editing, DAW window selection and Screen Set selection. Plug-in shows the insert slots for the selected channel and allows you to select or bypass any one of them. When selected, the controls for the plug-in are presented as rotary controls with all the correct labels, and if they won't all fit onto one page, a pair of Page buttons allow you to navigate additional pages. Instrument works in a similar way, but for Instrument tracks.

During my testing, V-Control linked to Logic on my MacBook Pro on the first try, but in the case of my studio Mac I had to trash the Logic preferences to get the V-Control bank function to work properly. Everything then worked as promised, but did it make life any easier? As a way of remote working or a means of adjusting multiple faders at the same time, V-Control Pro works extremely well. However, I missed having horizontal and vertical zoom buttons; according to Neyrinck tech support, Logic has a bug in its OSC control-surface protocol that prevents them from adding zoom controls, although some other DAW control apps I've tried seem to manage it OK. I also still prefer a physical wheel (or a virtual representation of one) for moving the timeline cursor through the song, although the solution employed here is quite usable. Being able to adjust a plug-in using the touchscreen is initially appealing, but in reality I found it easier and faster to stick to the mouse control method.

Next I tested Studio One 2. Following the detailed instructions provided made setting up V-Control (which appears as a Mackie Control) very straightforward. All the controls linked without fuss, so after a little experimental tinkering I shifted to Pro Tools. Again, the manual made setting up Pro Tools to respond to V-Control painless, and all the fader, button and read-out data translated perfectly.

V-Control Pro works well if your main need is to access faders, pans, mutes, solo, record buttons and transport. It incorporates some novel features, such as the ability to display plug-in and DAW screens, and in smaller studios the small physical size of an iPad means that you can fit it onto just about any desk without it getting in the way. If, like me, you are happy using a mixture of mouse, keyboard and control surface to drive your system, using an iPad App such as V-Control Pro is a very practical way to go, and it's also very cheap if you already have an iPad. I was particularly impressed by how smoothly V-Control worked with all the different DAWs I tried it with, and the manual deserves particular credit, as it makes setting up the controller to work with specific DAWs very straightforward.