You can't mix in surround on Pro Tools without shelling out for an HD rig. Or can you? 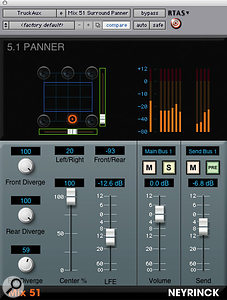 One of the major limitations of the current native versions of Pro Tools, LE and MPowered, is that there is no support for surround formats or mixing at all. However, Paul Neyrinck has come up with a plugin suite which has been designed to get round these limitations of working in surround on LE systems. It works by exploiting a relatively new feature in the Pro Tools format that was designed to furnish additional I/O from instrument plugins.

Mix 51 will work on any HD, LE or MPowered system running Pro Tools 7.0 or later, but Neyrinck advise using at least v7.2 to get the full benefit. They also remind users that as LE systems are hostbased, Mix 51 will introduce additional latency into your Session. The amount of latency is dependent on the H/W Buffer Size setting; for a typical setting of 512 samples the latency will be 10.6 milliseconds. To work in surround on an LE system you will also need to have an interface with at least six outputs, such as the M Box 2 Pro, 002(R) or 003(R).

Mix 51 is made up of two main components. First, there are Mono and Stereo Panner plugins that can be placed on track inserts to pan, mix and route audio to the Mix 51 Surround Mixer buses. Second, the Mix 51 Surround Mixer plugin provides 30 channels of outputs, grouped as three 5.1 main buses and three quad auxiliary buses. The idea is that the additional 5.1 buses can be used as subgroups to manage, say, dialogue, music and sound effects, while the quad buses are designed to handle quad reverb sends, as LE doesn't support surroundformat sends. 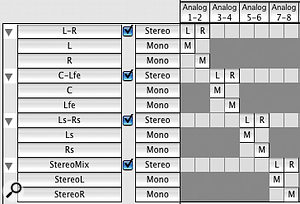 To use Mix 51, you need to set up stereo paths and mono subpaths in the Pro Tools I/O Setup window for the various physical outputs. In order to work in surround in LE you will need to spend some time in the I/O Setup window. Because Pro Tools LE can only address stereo output buses, you have to allocate three stereo outputs to connect to your 5.1 monitoring system. Neyrinck recommend you adopt the SMPTE order of Front Left, Front Right, Centre, LFE, Rear Left and Rear Right. You should also add the relevant mono subpaths as well, so that your I/O Setup looks like the one you can see in the screen on the opposite page. 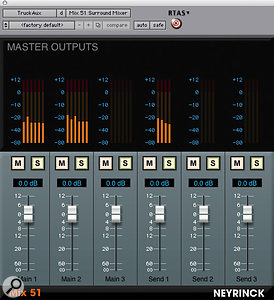 The Surround Mixer plugin can address up to three main 5.1 and three quad send busses.Surround Mixer is an RTAS plugin which can be placed on any mono or stereo track. A single instance of this plugin manages all Mix 51 surround inputs and outputs in a Pro Tools Session, so it is not necessary to have more than one Surround Mixer in any one Session. Because its inputs come from Surround Panner plugins and its outputs appear as Pro Tools track inputs, it is not critical where you place the Surround Mixer plugin, as it does not process any audio on the track where it is located. The audio is simply passed through from input to output. The mixer is fairly selfexplanatory, and gives you metering plus volume, solo and mute controls for each of the three 5.1 mix buses and quad auxiliary buses.

The Surround Panner plugin operates as an RTAS plugin on mono and stereo tracks. It will simultaneously pan to one of the 5.1 main buses and to one of the quad effects send buses, and provides panning, volume, mute, solo, LFE and divergence controls. By default, the Mix 51 Panner does not output any audio to the normal Pro Tools mixer, but hitting the Bypass button will pass the signal to the Pro Tools mixer as well, so you can set up an additional stereo mix while also continuing normal Mix 51 operation. It is even possible to have multiple panners on a single track, so you could route a track to two different Mix 51 main or send buses.

An additional LFE Send plugin operates as an RTAS plugin in mono, with a multimono version included for stereo tracks. Its purpose is to allow you to send a track directly to the LFE channel without having to send the signal into the main L/C/R/Ls/Rs outputs. Like the Panner, the Mix 51 LFE Send plugin does not route any audio to the normal Pro Tools mixer unless you hit Bypass, whereupon LFE Send will route the track to the Pro Tools mixer as well as the LFE bus.

The next step is to create enough Aux tracks in your Pro Tools Session to return the individual outputs from the Surround Mixer plugin and route them to the interface outputs. You will need three stereo Aux tracks for each plugin 5.1 buss you want to use, and a further two stereo Aux tracks per send bus. You can then insert your preferred stereo reverb plugin in both channels to create a pseudosurround reverb. Once all these Aux tracks have been set up, route their outputs to the appropriate interface outputs as set from your I/O Setup window.

The Surround Mixer plugin can go on any track in your Session apart from one of these Aux tracks, as a plugin cannot route audio to a track it is on. The best place to put the plug-in is on one of your normal 'content' tracks. It doesn't matter if it is a mono or stereo track.

Then you turn your attention to the input routing. Once you have the Surround Mixer plugin in your Session, when you click on the Input Routing button for one of your Aux tracks, you will see that there is now an additional 'plugin' option available to you. From here, you can select the appropriate bus to pick up from the Surround Mixer plugin. Repeat this with all the Aux tracks, selecting the appropriate buses as required. You can then hide the Aux tracks so they don't unduly clutter up your Session.

You can now add Panner plugins to your 'content' tracks. Within the plugin, you can select which of the Surround Mixer's multichannel buses that track will be sent to.

The layout and operation of the Mix 51 Surround Panner is very similar to that of the Digidesign Surround Panner. The basic panning tool is a conventional twodimensional panner of the kind that is often called an X/Y panner. You can either click on the orange '+' control and drag it around to perform panning moves, or use the sliders on the bottom and side of the panning grid to position the output of that track in your 5.1 surround sound stage. Separate controls set how much of the output of the panner will be routed to the Centre and LFE channels. 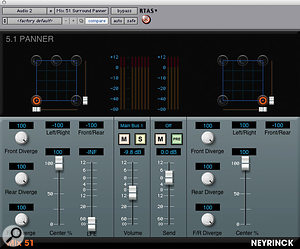 The stereo Surround Panner is, in most respects, a dualmono design, and doesn't allow you to pan both channels with a single movement.I was disappointed to find that the stereo version of the Surround Panner is basically two mono panners put together, sharing only a common routing and fader section. This isn't too much of a problem for setting static positioning, but it makes steering a stereo track around the surround sound stage very much more difficult, as you cannot grab both orange '+' icons and move them simultaneously. I would have preferred a version of the stereo panner that had one set of steering controls, as in the Waves 360 panner.

A hurdle with the whole Mix 51 system is that all plugins in the Pro Tools mixer are inserted before the track fader, with the exception of Master Fader tracks, so the track fader potentially becomes redundant in the surround mix. There are two ways of dealing with this. One is to use the fader in the plugin instead; the down side of this is that you don't see the mixer's fader move as you would normally. The other is to route each track to an Aux track, and insert the Panner plugins on these Auxes rather than on the source tracks. This, of course, means adding yet more channels to your mixer, and you end up with the fader and the plugin on separate tracks. We cannot blame Neyrinck for this limitation, as it is inherent in the design of the Pro Tools mixer, but it does make for a messy solution in this particular application.

Paul Neyrinck should be commended for producing an excellent 'out of the box' implementation of surround mixing in LE and MPowered systems. Mix 51 is a very workable solution that enables LE users to create and mix surround content. The idea of bypassing the conventional Pro Tools mixer routing does take a little getting used to, but the fact that multiple surround and send buses are built into the Mix 51 structure makes surround bussing and mixing on LE systems as easy as possible. There is an excellent demo session included in the installation, which demonstrates how to use Mix 51 and is well worth going through before you start using it in anger. My only disappointment in the design is the implementation of the stereo panner, where a singlesteering option would make all the difference.