You'd have to be bloody serious about Taiko to want 2.3GB of multisamples, but the instrument's ubiquity in high‑octane film and TV scores has led Nine Volt Audio to take it very seriously indeed. They put four Taiko drummers on a concert‑hall stage and recorded each with nine mics, hitting the drum head and shell; smacking the sticks together; growling and shouting blood‑curdlingly Asian syllables; and stomping their feet. At up to 90 velocity levels. If ever an engineer deserved a box of painkillers on expenses... 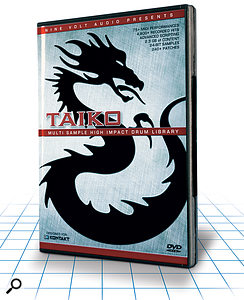 In Kontakt, if you just want specific sets of velocity‑mapped multisamples for particular performance techniques and mic positions, so that you can manually construct your own ensembles, you should be restrained until appropriate medication can be administered. Er, I mean, you should browse the Ensemble Constructor Instruments. For something more playable, Drum Instruments blend the mic signals for a specific performance technique to give more immediate gratification. A set of Effected Drum Instruments takes you into sound‑design territory using Kontakt's internal processing, but although interesting, I suspect they won't be the main reason anyone buys a multisample Taiko library...

What most users will be looking for is the archetypal legion of bald, sweaty drummers in loincloths, courtesy of the Multi Instruments. The quickest route to Narnian battlefields (assuming you have no wardrobe to hand) is via the dozen Performance Multis, each accompanied by a multi‑channel MIDI trigger file. These conjure all manner of breathless tribal pursuits and epic conflicts.

So does it sound the business? Yes. And the developers have covered every sonic angle I can imagine needing, plus a lot I can't. The Performance Multis sound very authentic, and include good specimens of the 5/4 and 7/4 meters that frequently crop up in Taiko‑garnished media music. Given the quality and quantity on offer, the price is reasonable too. Were it not for some occasional slightly flakey Kontakt programming and audio editing I'd have awarded this five stars.

As I've said, if you plan to buy this library, you have to be serious about Taiko, and not just in terms of money and disk space. While I was testing one of the Performance Multis, Kontakt's polyphony meter threatened to hit 500 voices, so CPU munch will be a concern (unless you plan to write a lot of solo pieces for Taiko... in which case, I pity your neighbours). So, as good as this library is, busy or cash‑strapped media composers might be tempted to forgo some of its flexibility and try the same company's excellent, and more wieldy, Action Drums Taiko Edition loop library. Mike Senior