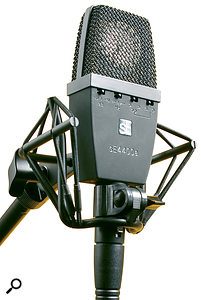 You can find any number of Chinese‑built microphones at the budget end of the market, but SE are one of the very few companies to own a microphone factory in China — rather than having their mics made for them in one of the huge factories in Shanghai or Bejing that specialise in building mics or capsules for third‑parties. Certainly, this has helped SE to build a strong reputation for value at the affordable end of the market, but they also make more up‑market microphones, many with innovative design features, such as the Titan's titanium diaphragm or the Gemini's dual-tube, transformerless circuitry.

The mic reviewed here is designed to meet professional needs, but priced within reach of the serious home‑studio owner, and despite cosmetic similarities to a well‑known Austrian studio classic — which also has a pair of fours in its name — the SE4400a is far from being a copy or clone. In fact, the mic's multiple patterns are achieved using a pair of back‑to‑back, large‑diameter (one inch), centre‑electrode capsules that are mechanically similar to those used in the company's SE2200a model. Indeed, that's my guess on how the name was arrived at: 2200a x 2 = 4400a. The two capsules are supported on a shockmount inside a slim, flat‑profile body, and the overall cosmetic theme is matt black (to comply with film, theatre and TV low‑visibility requirements). FET circuitry with a transformerless balanced output stage delivers the signal to the outside world on a conventional XLR connector, and standard 48V phantom power is required for operation.

A row of four miniature toggle‑switches along one side of the body allows you to switch in a ‑10dB or ‑20dB pad when working with high SPLs, to engage the high‑pass filter (60 or 120Hz, and off), set the pickup pattern to omni, cardioid or figure‑of‑eight, and to change between normal and hypercardioid mode when cardioid is selected — so you have four pattern choices in all. The main body of the mic is finished in a tactile, rubbery coating (possibly Nextel), and the steel grille is also finished in black. Overall, the quality of finish and styling is excellent, and the same can be said of the included shockmount, which grips the base of the mic in a plastic sleeve tightened by a thumb‑screw. The mic can either be mounted to sit snugly inside the shockmount or outside it (inverted), enabling it to fit into tighter spaces than the more common shockmount designs. Similarly, the three‑quarter‑inch-thick profile of the mic makes it easy to position in awkward places, such as around a snare drum. The usual swivel mount attaches the shockmount to the threaded mic‑stand adaptor, and I'm happy to say that the swivel locks really securely, even when the thumbscrew is just lightly finger-tight.

A frequency response of 20Hz‑20KHz is quoted. On its own, this means relatively little, but the frequency plot is somewhat more revealing and shows a nominally flat response, but with a gentle presence peak at around 10kHz. This type of response tends to produce a largely natural sound, but with an extra sense of clarity at the high end, making it suitable for a wide range of acoustic instruments from piano and acoustic guitars to drum overheads. The sensitivity of 14.1mV/pa‑34 (±1dB) puts the mic's output in the same ball‑park as most other similar studio mics, and although its equivalent noise level of 17dB (A-weighted) isn't outstandingly low, it is again pretty typical for this type of microphone, and certainly quiet enough for most studio tasks. A maximum SPL for 0.5 percent THD at 1kHz is quoted as 130dB, but I suspect that this is extended when the pads are switched in.

Matched pairs are available as an option for a slightly increased cost, but these come in a camera‑style case, with a sturdy metal mounting-bar so that you can use the mics as a spaced stereo pair.

The SE4400a is clearly designed as a general‑purpose mic, so I wasn't surprised to find that it had no overbearing tonal characteristics. Its presence peak gives it a slightly flattering, larger‑than‑life vibe, but in a pretty subtle way that doesn't make things sound too harsh, and the low end gains useful support from a little added warmth. The general tonality also remained reasonably consistent between patterns — taking the proximity effect out of the equation, of course.

As you'd expect, the large‑diaphragm design makes the SE4400 very good as a vocal microphone, and it should be quite flexible in this role, as long as you don't need to hype up the vocal sound too much. I even managed to make some good violin recordings, in which the top end of the instrument sounded very close to how I heard it in the room. Normally, I'd generally go for a mic with a more rounded‑sounding top end for recording violin, but I was putting this mic through its paces, after all, and the result I got responded very well to some gentle top‑cut EQ.

I found that acoustic guitar was handled without problems by the mic, which delivered both the depth and woodiness of the body sound, and the transient detail of the strings. I also managed to coax a very sweet, woody sound out of a mandolin when the mic was positioned about 12 inches from the sound hole. The SE4400a sounds good on hand percussion too, including bodhran, so it should work as a drum overhead or general percussion mic too. Because the response is pretty flat, with plenty of low‑end extension, there's no reason not to expect a stereo pair to turn in good results on piano, although I didn't have the chance to try this during the review.

Given that the mic is, as I mentioned, based on a derivation of two back‑to‑back SE2200a capsules, I also compared it directly with that mic (with the SE4400a in cardioid mode), and wasn't surprised to discover that they sound very similar. So if you only need a cardioid mic, the SE2200a is clearly going to save you a lot of money. Being hyper‑critical, I'd have to say that, as with large‑diaphragm mics more generally, it doesn't sound quite as focused as a small‑diaphragm model when used on some acoustic instruments, and its 'omni' mode isn't quite as true an omni as you'd get from a single, small‑diameter capsule. But, on the other hand, I couldn't find anything that it couldn't cope with, and its ease of positioning for a large‑diaphragm model was a big plus.

If you need a large‑diaphragm, multi‑pattern capacitor mic that's almost as easy to position as a small‑diaphragm pencil mic, the SE4400A, with its elegant shockmount, is a very practical choice in the mid‑priced section of the microphone market.

There are many multi‑pattern, transformerless mics, including the AT2050 reviewed in this issue, but in this form factor, only the AKG C414 models spring to mind.

SE have designed a good studio all‑rounder at a price point that should make it attractive to serious enthusiasts and professionals alike.