When we reviewed the original Cali76 compressor pedal in 2013, Origin Effects were a relatively new and unknown British company. Today, they’re lauded around the world, with a list of celebrity users as long as a David Gilmour guitar solo (yes, he’s one of them). The reason for this is Origin’s pedals themselves. In a nutshell, the Cali76 and the SlideRIG (a dual-stage compressor designed primarily for slide playing) put the sound and feel of a Urei 1176 into a guitar pedal, providing epic compression and sustain with studio-like transparency and low noise. 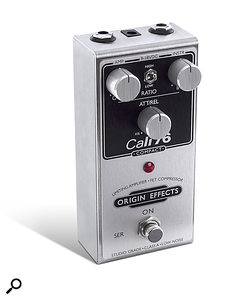 More recently, Origin have developed a range of compact pedals that promise to pack the same circuit topology and audio quality into a dramatically reduced package — they’re keen to stress that these are not ‘cut-down’ versions of the original effects but the real deal, and this is certainly reflected in the price, which, while a little lower, is still formidable for a stompbox.

There are two versions of the Cali76 in the new range — the Cali76 Compact and the Cali76 Compact Deluxe. The former is a very user-friendly package, with a single control that adjusts attack and release times simultaneously, a high/low compression-ratio switch and input and output level controls. For those seeking more in-depth control, the Compact Deluxe retains separate ratio, attack and release knobs and adds a dry level control for parallel compression, an intriguing feature only previously found on later, special-edition Cali76s. While there clearly wasn’t going to be room for the original’s 12-LED gain reduction meter, the Cali76 Compact Deluxe features a red/orange/yellow jewel light to provide a visual reference for the operation of the compressor.

To cut to the chase, both pedals sound excellent and turn in the kind of superlative performance that put Origin on the map. When compared directly with an original Cali76, it’s difficult to be completely scientific as the controls are not 1:1, but to my ears the differences, if any, are extremely subtle. The character and quality has been wholly retained, and it’s once again stunning just how good these pedals sound. What you get is smooth, musical compression, with no pumping or other unpleasant artifacts, and a wide-open, undiminished frequency range. Everything, in short, that you would want from a compressor. When using single-coil pickups in particular, it can feel like you’re really hearing the instrument properly for the first time, with unprecedented fullness, definition and power. 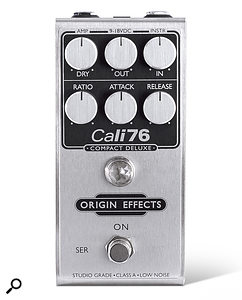 In use, the Cali76 Compact’s single knob works very well, smoothly traversing the range between a fast attack and slow release at one extreme and a slow attack and fast release at the other. The former provides more aggressively smoothed-out dynamics, while the latter provides more dynamic emphasis and highlights the pick attack. You still need to adjust the output control to bring the overall level back up (that’s vital in getting the best out of any compressor pedal) but gratification is still pretty instantaneous. The high/low ratio switch provides a choice between conventional compression in the lower setting and much more pronounced limiting, and, with the input gain control also effectively setting the amount of compression, there’s still a lot of flexibility available. All the same, this very much has the feel of a straightforward “make it sound better” pedal that you will set, forget and quite possibly never want to be without.

Move over to the Cali76 Deluxe and you’re instantly reminded of why Origin decided there was room for a simplified design. It takes a little more time to get to grips with the interaction of the separate attack, release and ratio controls (concurrent with necessary adjustments to input and output gain) and their effect on the overall sound. But the reward is the opportunity to fine-tune the action of the compressor to achieve exactly the desired result. Meanwhile, the dry blend control is a killer addition, allowing you to restore natural dynamics while adding sustain, fullness and, if you wish, a healthy additional level boost.

At first, I thought the simplicity of the Cali76 Compact had won me over, but this added feature and the greater tweakability of the Deluxe speak deeply to my inner knob-twiddler. As a confessed compressor addict, I could easily find room for both pedals in my studio, budget allowing. They may not be cheap but they ooze quality and any guitarist with even a passing interest in compression should make a point of auditioning one or both.