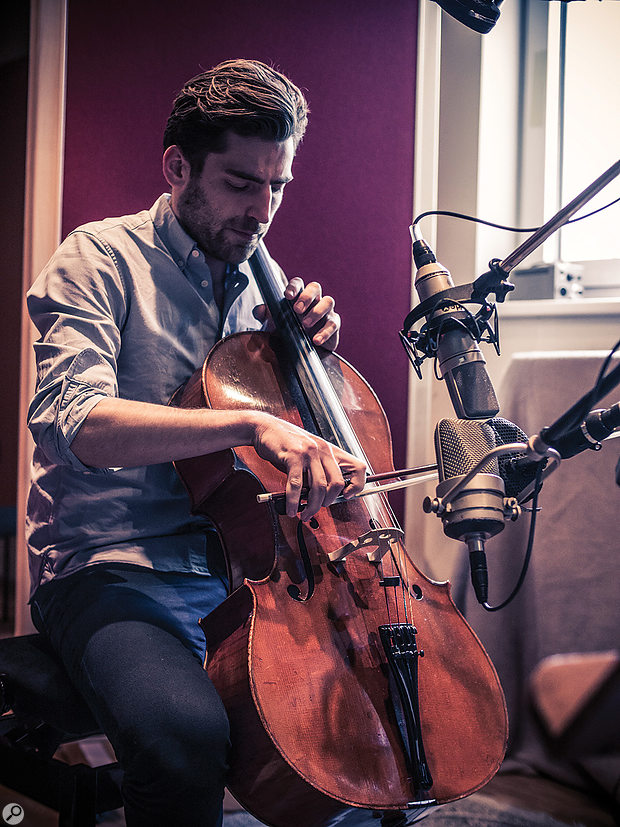 Orchestral Tools expand their series with a quartet of solo strings and a pair of intimately-recorded soloists.

Since releasing Berlin Strings in November 2013, Orchestral Tools have steadily augmented the library with expansion volumes. The first two of these (BST Expansion A & B) add special bowings such as sul tasto legato and col legno to the strings’ repertoire, while a third expansion set provides entertaining played effects including clusters, effect glissandos, tempo-synced measured trills, Bartok pizzicatos, etc.

Though such specialised articulations are great for adding colour and excitement to scores, the expansion set liable to have the widest popular appeal is BST Expansion D: First Chairs, which adds solo strings to the library. In addition to expanding the Berlin Strings range, Orchestral Tools have also launched a Nocturne Soloists Series, which so far consists of Nocturne Violin and Nocturne Cello. In this review we’ll take a look at First Chairs and both Nocturne instruments. As they feature techniques instigated for Berlin Strings and Metropolis Ark 1, you may care to refer to those titles’ SOS reviews, published in August 2014 and September 2016 respectively.

Released in June 2016, the First Chairs expansion set features the Berlin Strings principal players going through their paces in the Teldex Scoring Stage, home of Orchestral Tools’ sampling projects. Featuring a line-up of two violins, viola and cello, the library works both for stand-alone string quartets, and for layering and blending with larger string ensembles. To that end, the players were recorded in their natural orchestral seating positions and multi-miked in the same way as the Berlin Strings string ensembles. They’re also sonically compatible with the massive sections in Orchestral Tools’ Metropolis Ark 1 library.

First Chairs’ solo instruments play an identical set of articulations, including a very effective true legato mode. The library uses three dynamic layers throughout, with up to six round robins on its short notes. Sustains and legatos are highly responsive to touch: playing quietly produces a soft attack and a subtle, expressive volume swell, medium velocities trigger an immediate attack and loud notes produce a hard accent. In this library the vibrato is (as they say) ‘baked in’, but there’s nothing half-baked about the vibrato delivery: it develops soon after the initial note front, and sounds utterly natural and musical.

The violins’ legatos (which utilise VSL-style held-note re-triggering) work very well for agile, impassioned and romantic playing, with grace notes sounding particularly effective. Playing hard triggers long portamento slides, which adds an extra layer of realism. Violin I and II sound less homogenous than I expected: Violin II’s spiccato deliveries are fiercer and more astringent, and its short portatos are played longer with a more pronounced vibrato. Rather than assuming that Violin I is the ‘First Violin’, I would treat the two instruments as equals and make a point of comparing them when looking for a particular articulation.

Orchestral viola players used to have a reputation as timid ‘shrinking violets’, but today’s generation is made of sterner stuff: these guys play their instruments with authority, passion and commitment, to the extent where I once had to ask four viola players to play quieter as they were drowning out a section of 14 violins. I’d guess the First Chairs viola player has not led too sheltered a musical life, as his intense, searing legato loud notes and tough, in-your-face portatos speak of battling against raised decibel levels at sweaty jazz and rock gigs. He also has a sensitive side, as demonstrated by the viola’s tender and emotional quiet notes.

Those who don’t listen to a lot of orchestral music may be unfamiliar with the cello’s upper range, but in the hands of a masterful player like the one featured here, it can be as sweet and expressive as a violin or viola. First Chair’s solo cello spans a full four octaves up to a high C, and its excellent, soaring legatos take full advantage of the wide compass. The extended range of the cello also comes in handy for composing full quartet parts. I found its soft-attack sustains particularly inspirational for writing.

The four instruments sound perfectly blended when played together as an ensemble: you can use the aggressive hard-attack sustains (which combine a strident bow attack with an impassioned vibrato) to play powerful string quartet accents, and the lively spiccatos and delicious portato deliveries also produce a great section sound, which sounds tremendous when layered over larger string sections, adding detail and depth to the overall ensemble.

For their Soloists series the producers returned to their favourite Berlin studio, but this time headed for one of its smaller rooms. As well as being a good place to hide from TV licence inspectors, the Teldex Solo Booth has an intimate, ‘up close and personal’ acoustic which provides a great contrast with the sonorous overtones of the hall.

Using the Nocturne instruments’ polyphonic keyswitching feature, you can stack four articulations from a multi-patch and lock them into a single playable patch.

In addition to an identical menu of single patches, both Nocturne instruments feature a single ‘multi-patch’ containing 12 keyswitchable articulations. These super-patches may be customised to your heart’s content: you can create your own selection of styles, delete those you don’t need, and add legato transitions to any long-note delivery (even dynamic swells, trills and tremolos) simply by clicking on a small legato icon. Very cool.

I was taken aback by the wealth of true legato articulations in this library: there are 14 different types, based on four different legato transition lengths: 1/2 bar, 1/4 bar, 1/8 bar and Runs, each of which has a slurred and detaché option — the first features the smooth effect of notes falling under the same bowing, while the second provides notes played with a change of bow direction, creating a more articulated note front. The first two also have an espressivo option and the 1/2 bar type features portamento slides, all with slurred and detaché variations.

Legato patches respond to playing speed and automatically select the appropriate kind of transitions in real time: slow playing triggers the 1/2 bar samples, while rapid passages are deftly handled by the Runs. The latter is the most nimble and realistic emulation of fast violin playing I’ve heard in a sampled instrument; assuming you or your sequencer can play quickly, it will output wonderfully convincing, quicksilver volleys of notes which Paganini himself would have been proud of. Continuing the different note-length theme, the violin’s sustains range from 1/4 bar to looped two-bar lengths, with a choice of four vibrato styles (which are also available for the legatos). In addition, there are straightforward spiccatos with 10 round robins, staccato and marcato detaché short notes, tremolos, delicate pizzicatos, and trills ranging from semitone to fifth intervals. All this adds up to a massively flexible, beautiful-sounding instrument which pushes the boundaries of expression and playability.

Nocturne Cello boasts the same super-abundance of note lengths and vibrato styles as its violin companion. Sampled over four octaves from C2 to C6, the instrument’s superb, luxuriant tone is beautifully captured by the close-up recording. You can hear every nuance of the bowing, to the point where it almost feels like you’re in the room with the cellist. The performer injects great feel and expression into his vibrato deliveries, and the legatos soar effortlessly up into violin territory, maintaining an admirably even tone across the range. Play it fast, play it slow — it all sounds great straight out of the box. 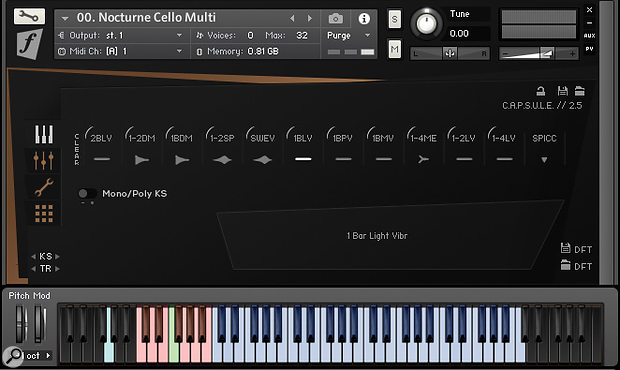 The Nocturne Cello and Violin instruments feature customisable multi-patches which allow you to switch between 12 playing styles in real time.

Though you might prefer a heavier section sound for dramatic film cues, the cello’s light, brushed spiccato style is nicely propulsive, and its marcato short notes have plenty of bite. Features shared with the violin include the Trills Orchestrator originally developed for Berlin Woodwinds, which automatically plays trills of up to a fifth interval when you play two simultaneous notes. A con sordino (muted) tone is created by a scripted filter: purists may complain, but this treatment produces a warm and naturalistic mute timbre, not at all like a synth filter cutoff control.

Surprisingly, the Nocturne instruments use only one velocity layer, the idea being to avoid phasing artifacts that occur when you crossfade between different dynamic layers. The producers left it to the musicians to choose the best dynamic for each of the various articulations, then concentrated on capturing many different types of expression; a specially designed filter system built into the player software emulates the timbral variation that occurs with dynamic changes.

If this sounds like heresy, forget the technical facts for a moment and take a listen to Hendrik Schwarzer’s online demo for Nocturne Violin: it demonstrates an instrument so emotive and dynamically expressive that it brings a tear to the eye, and the composition is pretty special too.

I recommend these fine solo strings libraries to all serious orchestral sample users. If you were pondering over which one to buy, bear in mind that the multi-miked concert hall sound of First Chairs, discernible even on the close mics, gives it a somewhat ‘classical’ flavour, while the controlled, intimate, reverb-free acoustic of the Nocturne instruments makes them suitable for pop/rock, folk, jazz and orchestral productions. Legato performances are excellent in all three, with Nocturne Violin’s breathtaking legatos taking the ‘best in show’ award. If you already own Berlin Strings, First Chairs is the ideal way of expanding its instrumentation; if you’re new to Orchestral Tools’ libraries, take a listen to Nocturne Violin’s online demo and prepare to be blown away.

Orchestral Tools’ BST Expansion D: First Chairs, Nocturne Violin and Nocturne Cello are formatted for Kontakt and require the full version of Kontakt 5.5.1 — they don’t work with the free Kontakt Player. All incorporate the company’s Capsule articulation management system, which enables such goodies as polyphonic keyswitching and the ability to apply true legato transitions to any long-note articulation. Like all the Berlin Series expansion volumes, First Chairs works as a stand-alone collection independent of the Berlin Strings main library. All are available as downloads, and First Chairs may also be ordered on a 250GB SSD backup hard drive at extra cost.

The Nocturne Violin and Cello have a choice of two similar-sounding close mikings, which can’t be mixed together; Close II sounds fractionally more distant than Close I. You can add orchestral hall reverb courtesy of a convolution impulse response captured in the Teldex hall, thus sonically tying these solo instruments in with other Orchestral Tools libraries.

While it works as a stand-alone library, the First Chairs string quartet is the ideal complement to Orchestral Tools Berlin Strings sections, and its four instruments sound great whether played individually or as an ensemble. The close-up recording style and superb tone of Nocturne Violin and Nocturne Cello make them supremely adaptable to different musical styles. None of these libraries is suitable for absolute beginners, and to get the best results from the Nocturne instruments requires some technical understanding; that said, experienced orchestral sample users will appreciate these supremely playable and flexible instruments.