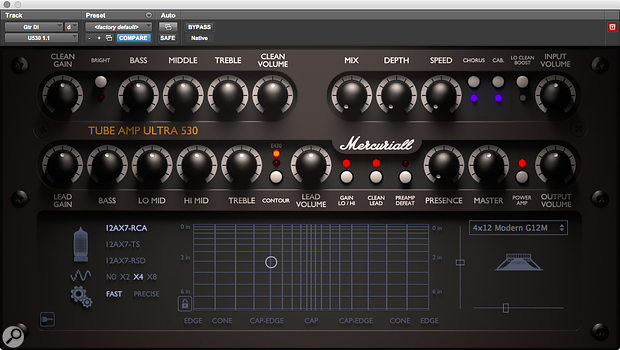 Don’t be fooled by the characteristic script font used to pick out the name of Russian developers Mercuriall: this guitar-amp modelling plug-in does not pay homage to a well-known British manufacturer! Rather, it is a souped-up recreation of the Engl E530 rackmounting studio preamp, a 1U device that is particularly favoured within the seven-string, pointy-guitar fraternity. Mercuriall say that they’ve completely modelled the circuit at component level using artificial neural networks, and to enable their plug-in to be used as a ‘one-stop shop’ for complete guitar sounds, it also includes modelled power-amp and speaker/mic stages, plus a chorus effect.

Although it doesn’t present a smorgasbord of different vintage amp emulations, it soon becomes clear that U530 is nevertheless a pretty versatile amp-simulator plug-in. The clean channel can do that icy, crystalline thing beloved of metal players in their sentimental moments, who are presumably also the target market for the chorus; but hit the Lo/Hi Gain button and it also gives you access to a good range of raunchy, crunchy rhythm tones. Switch to the lead channel, however, and you open the floodgates on some serious high-gain action. The four-band EQ and, especially, the three-way Contour button enable numerous flavours of filth to be accommodated, from thick, mid-heavy sustain to heavily scooped tones ideal for palm-muted chugging. There’s a choice of eight different cabs, with a wide range of virtual mic positions achievable by moving a target on an X/Y display. Those of a tweaky disposition can also choose three different emulated types of 12AX7 preamp valve, with subtle but noticeable changes to the sound resulting.

U530 still has a few rough edges. There’s no level metering at all, for example, nor any factory presets, and the operating range of some of the controls seems a little extreme — turning the chorus depth up above a 10th of its range, for example, made me feel seasick. Given that it majors in high-gain sounds, it’s also a shame that no noise gate is included. However, these are minor niggles in the scheme of things, and especially so when you consider the price. The full version, which includes all the features described here plus oversampling, support for high sample rates and free updates, is very inexpensive; but to whet the appetite, Mercuriall are also offering a fully functional free version, albeit lacking some features such as switchable cabs and tubes. I think most guitar players will find it a worthwhile addition to their plug-in folders, especially if you have any sort of bent towards metal or hard rock. U530 is a genuinely useful emulation of a hardware device that, as far as I know, has not previously been modelled in software, and a very promising start for a plug-in company I’ve not encountered before.