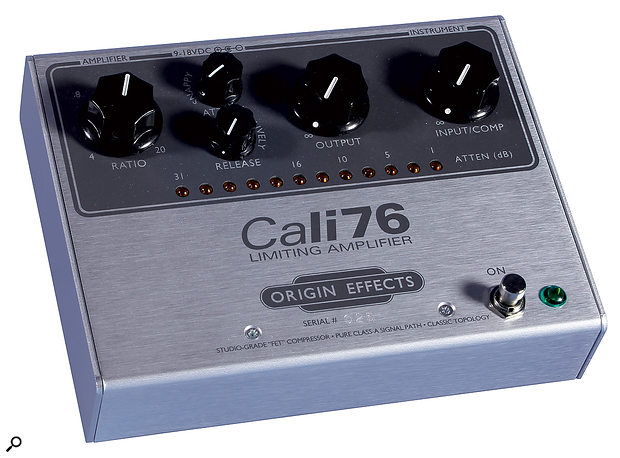 Compression is an often under-rated weapon in the electric guitarist's arsenal. From simply adding sustain and volume, to making the guitar sound thicker and fuller, to smoothing out or emphasising pick attack, the right compressor pedal can form the bedrock of any number of great guitar sounds. Although classic early compressor stomp boxes such as the grey Ross Compressor, the red MXR Dynacomp and the, well, orange Dan Armstrong Orange Squeezer were big on character, notions like high fidelity, wide bandwidth and tonal transparency were less prominent on their to-do lists. The majority of compressor pedals produced since then have largely followed these same designs, but over the last decade and a half, the burgeoning boutique scene and an appetite for 'studio style' compression in stomp-box form have seen guitarists spoilt for choice. Valve or solid-state, optical or FET: these days, there's no shortage of options when it comes to high-end guitar compression.

The Cali76 from Origin Effects takes the concept of a 'studio style' compressor pedal to a new level. Described as a premium-quality, 1960s-style FET compressor, it's unashamedly modelled on the Urei 1176. Just to be clear from the outset, though, this pedal is not marketed as an 1176 clone. According to designer Simon Keats, who has previously worked for the likes of Focusrite and Trident, the intention is to offer the same quality of sound, character and musical compression you might expect from an 1176 rack unit, but with a smaller format and lower price to appeal to guitarists. To that end, the circuit inside is significantly different from the original: simpler, optimised for electric guitar and bass and able to run off a 9V battery.

The Cali76 is far from unsophisticated, however, boasting a fully Class-A, discrete signal path, a high-quality input preamp and low-noise components throughout. It boasts a range of features familiar to the 1176 but rarely seen on compressor stomp boxes, including separate ratio, attack-time and release-time controls (in addition to input gain/compression and output-level knobs) and a 12-LED, VU-style gain-reduction meter. It's large by the standards of guitar pedals, measuring around 70 x 205 x 160mm (HxWxD), but its handsome, chunky black knobs and very useful metering go a long way towards justifying the extra pedalboard real-estate required.

While the Cali76 will run happily off a standard 9V cell, you can also use a 9V DC mains adaptor or, for best performance, an 18V DC mains adaptor. The latter will increase headroom, allowing cleaner compression and better performance with high-output or active pickups. Inside the pedal, a set of jumper switches selects between a hardwired, 'true' bypass when the pedal is off and a low-impedance, buffered bypass suitable for driving long cable runs.

The pedal on review is the more costly Cali76 Transformer-Option model. On top of the basic Cali76 features, it boasts an extra Class-A, discrete output amplifier with a custom-designed transformer. In addition to the standard unbalanced, instrument-level output, this provides a balanced, low-impedance, line-level line/DI output, with -28dB pad and ground lift switches. A high/low gain switch changes the gain in the output amplifier, from the normal 'low' setting to a +9dB 'high' setting designed to reduce headroom, increase saturation and encourage extra harmonics in the output amplifier.

This additional output stage requires an 18V DC supply; sensibly, however, it is automatically disengaged and the pedal returns to stock when using a 9V supply or running off a battery. A further option is available in the shape of a high-linearity, broad-spectrum Lundahl output transformer, presumably for those interested in maximum bandwidth and the cleanest possible sound, while Origin say they are planning on also offering a built-in dry-mix control for parallel compression and a footswitchable, variable solo boost as custom options in the future.

But let's get back to the present: what does the Cali76 sound like? Of all the words that spring to mind, 'clean' is perhaps the foremost. Applying any kind of compression will necessarily raise noise floor, but the Cali76's ability to add even the most heavy-handed helpings of squash and sustain with minimal additional noise is exceptional. That's not to say that the sound is cold and clinical, however — far from it. The low noise, coupled with the kind of wide, flat frequency response that you just don't expect from a guitar pedal, means that the guitar's individual character and musicality is not just preserved but actively enhanced by the Cali76's compression.

The additional controls make this an extremely versatile pedal, and it can cater for everything from subtle yet effective low-ratio compression at one extreme to some pretty aggressive limiting at the other. In the latter case, the Cali76 will all but level off any variation in pick attack, supplying extreme sustain and rendering the strings incredibly touch-sensitive, which is great for slide playing, in particular. At settings where most compressor stomp boxes would be hissing like a nest of vipers and reducing the guitar sound to a muddy mess, the Cali76 somehow manages to retain clarity, top-end detail and the same glassy shimmer found at lower settings.

The attack- and release-time controls provide a convenient means to shape the pedal's sound and response, particularly in terms of the way the compressor enhances and defines note attack. Adjusting the attack time can give the start of each note a percussive snap or a more muted thud, while different release settings provide a smoother or a more lively overall response. Just how marked these effects are will, of course, depend on the other settings. It's also worth noting that, even at their extremes, these controls stay within a sensible, usable range for guitar and bass. It's very hard to make the Cali76 sound bad, although those who like to use and abuse their effects beyond safe parameters should probably look elsewhere.

However, there's nothing to stop you using the Cali76 on something other than guitar or bass. I tried using it as an external processor attached to my DAW on some drum tracks and got some great results, although it was more comfortable delivering overt 'compression as an effect' than subtle mix compression (for which you'd want a stereo plug-in anyway). The line-level output and ground-lift switch are obviously helpful in this scenario, but it's worth remembering that the input is still optimised for guitar and bass, so attention must be paid to getting the levels and gain structure right when routing a signal in and out.

As for the other additional tone-shaping feature provided by the Transformer-Option upgrade — the high/low gain switch — its effects are more pronounced with electric bass than they are with guitar, adding a warm burr of distortion around the edges of the note. With guitar, the effect is less immediately noticeable, but in the right context, particularly when working with an already driven signal and medium to high compression settings, switching to high gain adds an extra dimension of richness and complexity to the sound.

In summary, then, the Cali76 is a very, very nice compressor pedal. It's versatile, extremely well made and seemingly incapable of delivering anything other than high-quality sounds. It's one of those rare pedals that just seems to make every guitar sound nicer, fuller and more like itself. It's a little pricey by stomp box standards, especially if you go for the luxury output transformer upgrade, but guitarists and bass players who really appreciate the subtleties of a good compressor — which is to say, just about every committed compressor pedal user — will find much to enjoy in the Cali76. David Greeves