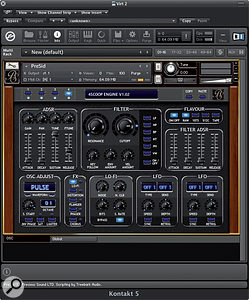 The PreSid is a Kontakt 5/Maschine instrument based around samples of the 8580 SID (Sound Interface Device) chip, a revision of the 6581 SID. The 6581 SID was the noisy heart of the Commodore 64, and if you're of a similar vintage to me, you grew up with the SID's bleeps and bloops soundtracking every stomp of a mutant camel's foot. The SID chip's unique, grungy sound has made its tones sought after in the decades since, and used by artists such as Daft Punk, the Prodigy and Timbaland, often via the Elektron SidStation, which housed an actual, flesh-and-blood SID chip.

The PreSid comes in various flavours: a Kontakt version, a Maschine version and a Deluxe version featuring both. The main differences between the packages (apart from price) are the kind of material being presented; the Kontakt package is the full synth experience, whereas the Maschine version necessarily concentrates on the percussive and special-effects side.

The Kontakt version boasts 6600 44.1kHz, 24-bit samples. The reason for the high sample count is that each waveform from the SID chip has been sampled in four ways: Raw (plain), 512C (through an API 512C at moderate levels), 1073 (through an AMS Neve 1073LB module pushed to saturation) and Tape (recorded to a Tascam 122). Each sample is also very long (around five seconds), to avoid tiny loop issues.

The Maschine version offers a more modest 812 88.2kHz/24-bit raw and processed samples. It's the Kontakt version I'm going to concentrate on here, but as the Maschine package looks to be a subset of that, there shouldn't be any major differences, apart from genre of sounds.

PreSid consists of two main screens, and it's the Oscillator panel we'll look at first. This is where you access the PreSid's four 'oscillators' (in reality, long samples of a SID chip rather than generated waveforms). There's a choice of 20 waveforms, and it's also on this page that you can choose whether to have the sample served straight up or in one of the alternate flavours. Personally, I tended to stick with the Raw option when I was making patches, but I did like the woozily nostalgic sound of the Tape flavour on occasion. Each oscillator has separate amplifier and filter ADSRs, two LFOs and a comprehensive effects section, including distortion, flanging and lo-fi. I would have loved to have per-oscillator reverb and delay too, but then I do tend to want the moon on a stick.

Each oscillator filter sports low-pass, high-pass, band-pass, notch, phase and vowel modes. Handily, a right-click puts any control, such as filter cutoff or resonance, into MIDI controller mapping mode and then the PreSid really comes to life. I did notice a little zippering when doing insane cutoff sweeps, but nothing out of the ordinary for a software filter. There is keyboard velocity control for the filter but, sadly, none for the amplifier — a strange omission.

The controls above are per-oscillator, and the PreSid has four! Fortunately, the top right of the Oscillator Page features Copy and Paste buttons, so it's a doddle to concoct a labyrinthinely-modulated oscillator and then copy it to the others. Once you've copied your oscillator, individual tweaking can allow you to build some truly huge, flowing sounds that evoke modular territory rather than the humble C64. If you get lost (which I did a few times), double-clicking the Precious Sound logo initialises all the parameters. 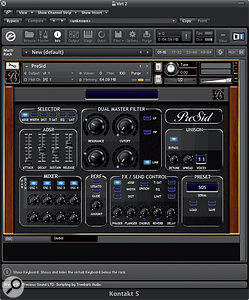 The first thing to note on the second PreSid page is the global ADSR envelope. This can modify all four oscillators' settings, although it's dependent on the oscillator's individual ADSRs. Say you've patched an oscillator release that's zero: increasing the release on the global panel will not lengthen that. However, if you've set the oscillator release to a lengthy time, you can shorten it with the global ADSR. Got that? I found the global ADSR very, very handy. I patched the individual oscillators with varying releases and then assigned the global release to a pedal via my PC3, thus having a fine control I could vary while playing with both hands, enabling all kinds of grandiose Vangelising. But it was here that I found the only significant bug in the PreSid: sometimes the global ADSR simply didn't work. I made sure it was on, the oscillator envelopes would allow tweaking but... nothing. Then, if I switched between oscillator pages, it would engage at random and work from then on. I emailed the developer, but he was unable to replicate this glitch and I've only had it happen a few times. The rest of the time, the global ADSR has behaved itself impeccably.

The Global page also provides a filter. So, remember: you have a filter and envelope for each oscillator, and also a global filter and envelope! Truly, Ambassador, you spoil us. Next is a mixer for the four oscillators and a master effects section that features a very handy reverb and delay, as well as other goodies. Rounding off, we have a patch Load/Save area and a 'Perf' section, which is actually where you find the portamento settings. The Load/Save buttons work perfectly, but I would have liked a quicker way to audition patches. The developer says this will be addressed in a future update.

When I first loaded the PreSid instrument into Kontakt, I was immediately impressed by the presets. If you're looking for a cheap way to access those marvellously stupid C64 sounds, the PreSid nails it, and at a good price. I fell a bit in love with the Strings preset; it's computer retro and yet still warm. Auditioning each preset, it's obvious that a huge amount of care and perhaps obsessive love has gone into PreSid. All the classic Commodore sounds are available and most of them require only minimal tweaking. If the PreSid had a suitably gonzo arpeggiator, the C64 sound would be complete.

However, do not dismiss PreSid as being for retro hipsters only. This is an incredibly lush and deep instrument capable of producing massively complicated, evolving sounds as well as perfect, cutting, 8-bit emulations. The library of presets is excellent and worth the admission price alone, but if you never venture beyond that, you're missing out on hours of fun mangling sounds and getting lost in this enhanced vision of the SID chip.

PreSid does a wonderful job of providing convincing C64 tones, but it's also a powerful, flexible synth in its own right, and useful across many genres of music.