Back in March 2014 SOS ran a review of Output’s debut product, Rev, which is a Kontakt instrument based around reversed samples. Their second product, Signal, deals with pulse sounds and is described by Output as the world’s most powerful dedicated pulse engine. Broadly speaking, it is similar to Rev in that it feeds samples through processing engines before mixing them to make a composite patch or sound, but Signal’s interface is organised rather differently.

To make preset searching easy, Signal has a panel of tags, with names like Clean, Fat, Side Chain, Sound Design and Dark, and when one of them is selected, a menu of applicable presets appears. It’s a great idea! The presets make use of the powerful processors and effects provided by Signal, but underneath all that, each one is based on two samples. Understandably, changing the samples has a dramatic affect on the sound, and it is easily done using another of Signal’s menus, which offers electric and acoustic piano, string, brass, woodwind and percussion instruments (numbering 25 in total), and 25 synth options. Any pairing can be had by selecting one instrument sample for Pulse Engine A and another for Engine B. Each Pulse Engine then has two rhythm generators and the user gets to choose what those generators are. The options include a powerful step sequencer with up to 32 steps, a one-to-32-step arpeggiator, a note looper with a definable region, and an LFO modulator. In addition to all that the engines have an ADSR envelope as well as some filter, tune and pan options, and there is a separate effects page sporting a variety of global and channel effects and processors. 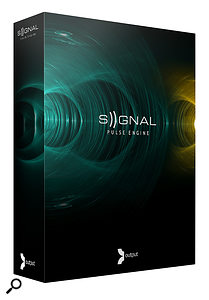 As you can imagine, Signal is a very complex tool, but it also offers some quick and easy controls for those who want to make fast preset tweaks. For example, the main view provides four sliders which morph from one state to another when moved. Wide to Centre, Wet to Dry, Long to Tight and Open to Closed are just a few examples of morphing options, but the slider’s functions vary depending on the preset. And if all the modulations are becoming a bit too much, the pulse engine sections can be switched off with one button click leaving just the very nicely recorded source sounds and any effects that are in use.

In its uncompressed form, Signal takes up a massive 40GB of disk space, which means that loading it into Kontakt takes quite a while. It’s also not the cheapest product on the market, but the asking price seems fair given its size and the number of powerful processing tools it provides.

Some of the tools are not unlike those I’ve encountered when reviewing other Kontakt instruments like Sample Logic’s Xosphere and Cinematic Keys, but Output’s take on things is different. I found it very easy to use and was impressed with both the basic samples, which sound very nice, and the range of tools available for processing them. Sound designers could easily find themselves doing a lot of donkey work with this one instrument and electronic artists are sure to find it a source of inspiration. Tom Flint