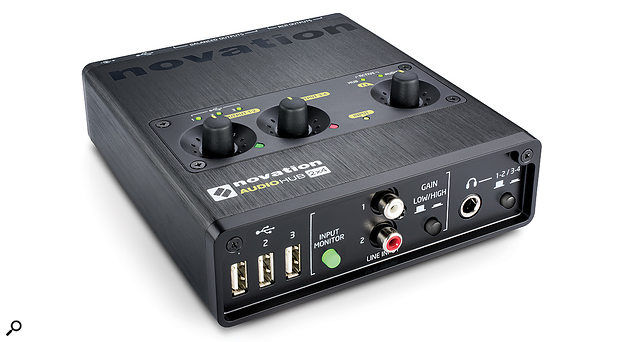 The Audiohub 2x4 is a curious new piece of hardware from Novation, erstwhile purveyors of synthesizers and MIDI controllers. Being the only dedicated audio interface in the Novation range, the Audiohub is designed to provide flexible audio output and monitoring facilities for the electronic musician in tandem with a powered USB hub. On the face of it — given the ever–decreasing number of ports on new computer models — Novation’s ploy of combining an audio interface and USB hub seems to provide a neat solution for a musician wanting to plug in a range of USB peripherals with a minimal amount of hardware. But how does it perform?

The Audiohub is housed in a tough and compact metal case with a brushed aluminium finish. Aside from push switches that rattle very slightly, controls feel incredibly positive and sturdy, whilst a rubberised pad underneath keeps the device from sliding around on the desktop. The top panel features separate volume dials for output pairs 1–2 and 3–4, with an LED on each showing activity and/or clipping on the outputs. Above these controls, further LEDs indicate which USB ports in the hub are active. On the right-hand side is a volume control for headphones, and Novation, by all accounts, made this ‘super loud’ to cope with the demands of cueing–up material during a live performance. Three further LEDs adorn the panel to show audio input activity and whether the USB hub and audio stream are in use. On the front of the unit, the USB hub is housed on the far left. Next, an input section provides two line-ins on phono connectors. Instead of having a variable gain control, a simple switch toggles between two gain levels (0dB and +10dB) and an input monitor switch to route the inputs for direct monitoring. A headphone socket completes the line–up, with a switch to toggle between the output 1–2 and 3–4 mixes.

Around the back, balanced TRS jacks and phonos (RCAs) are provided for the first two line outputs, with unbalanced phonos only for the second pair of outputs. Power comes by way of a provided DC supply; although USB bus powering does work to some extent, in testing I found that playback was extremely jittery even without the USB hub being active. Granted, Novation do warn users to plug in the power supply for ‘best results’, but bus powering didn’t go at all well for me.

To get started on Mac OS, things are incredibly straightforward since the Audiohub is class compliant. You simply plug in the audio interface and start using it straight out of the box. Meanwhile, drivers for Windows 7 and 8 are available from the Novation web site. Whilst no additional software is required to operate the audio interface, Ableton Live 9 Lite is available for download using a code on the licence card inside the box. No doubt the majority of potential users will already have their own fully specified DAW software in place, but if not, Live 9 Lite provides enough features to get started, including eight audio/MIDI tracks and sufficient output channels to feed the Audiohub’s line outputs. 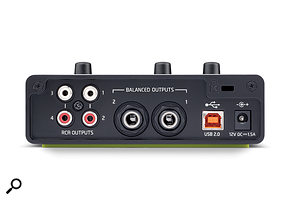 The rear panel houses two balanced jack outputs, with outputs 1–2 being duplicated on phono (RCA) connectors and line outputs 3–4 on unbalanced phonos only. On the right-hand side there is a Kensington security slot and ports for the USB cable and DC power supply (both supplied in the box).

Once the Audiohub was plugged into the mains, everything worked very smoothly indeed. I found that the low gain setting on the line-ins provided a suitable level of gain for plugging in a range of external devices, whilst the simple solution to input monitoring ensured that the input signal was routed to the main outputs and headphones straight away. There was no noticeable noise present. One interesting application suggested by the user guide is to employ line outputs 3–4 together with the two line inputs as an effects loop in a live performance situation. This could work really well with an aux send in the software feeding hardware outputs 3–4 and passing back into the line inputs — post effects — with direct monitoring enabled.

The headphone amplifier’s output is very loud, as promised, but a peculiarity here irks me slightly. With the headphone level turned down completely, whilst one side of the stereo field is completely muted, the other remains faintly audible on the headphones. The majority of users won’t be worried about this, but it is annoying if you’re a discerning listener or you have an application in mind that requires the headphone mix to be muted.

The USB hub worked well and I was able to mount/eject devices and transfer data efficiently without any kind of interference on the audio stream. In a typical home-studio configuration, these extra ports really do help to avoid the clutter associated with external USB hubs, whilst arguably also reducing wear on the computer’s USB ports.

With an assortment of virtual instrument and audio tracks running in my DAW software, I was able to reduce buffer sizes to the 64–sample point without any noticeable artifacts and with virtual instruments being triggered without any discernible latency. To assess the quality of the D-A converters and headphone amplifier I also compared the Audiohub to the built–in audio on my Mac using a range of reference tracks. I could not identify any noticeable improvement upon the Mac’s internal sound, which suggests that the converters are of a decent quality, but you shouldn’t expect that the Audiohub will match the audio quality of higher-end USB audio interfaces.

The Novation Audiohub 2x4 audio interface offers a handy feature set for the playback of electronic music, with simple operation, control over two pairs of outputs for mixing and live performance, plus an abundantly useful USB hub. It’s well worth having a look at if it matches your needs, but the lack of a microphone preamp or MIDI I/O could well prove to be a deal breaker for some potential buyers.

For a little more money, you might take a look at the Native Instruments Komplete Audio 6. This doesn’t feature the USB hub of the Novation, but has all of the other features and much more, including variable input gain, increased analogue inputs, mic preamps, balanced ins/outs throughout, MIDI I/O and digital I/O.

If you’re looking for a healthy combination of inputs and outputs combined with a USB hub, the M–Audio M–Track Quad is a worthy contender. This interface — an improved and repackaged version of the EIE Pro from sister company Akai — features four mic/line inputs with individual gain control, MIDI I/O and insert points. It perhaps isn’t quite as suited to live use as the Audiohub because it lacks a hardware volume knob for the second pair of outputs and isn’t as compact.

A well–built and simple to operate audio interface that works just as expected once plugged into the mains. Worthy of consideration if the features offered perfectly meet your needs for a home studio or performance context.