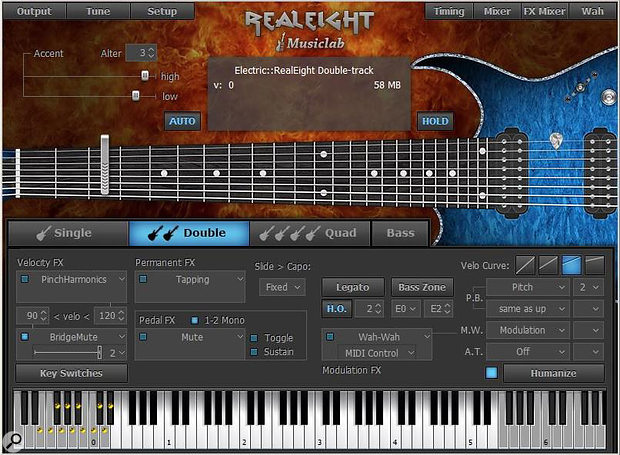 The fifth of MusicLab’s ‘Real’ virtual guitar instruments, RealEight is modelled on an eight-string guitar, currently popular for metal, prog metal, epic rock and all things dark and demonic. In common with the rest of the ‘Real’ range, it utilises a system of customisable keyswitches, controllers and other playing conditions to access a wide variety of guitaristic articulations, noises and performance effects.

The most significant departure from MusicLab’s established format is the absence of different playing modes (Solo, Chords, Harmony, Bass’n’Chord and Bass’n’Pick). RealEight is permanently operating in the equivalent of Solo mode, since metal guitar is mostly about freestyle riffing and shredding. Although RealEight has no Chord mode (hence no chord detection algorithm), it is still possible to strum chords, the only real difference is that you have to provide your own chord voicings with one hand whilst strumming with the other.

RealEight’s five-octave range extends from note 40, the same low E as a bass guitar (standard eight-string tuning starts one tone higher; F#, B, E, A, D, G, B and E) ending on a high E (note 100). The trigger keys are therefore higher up the keyboard than on other Musiclab products, starting on a high F (note 101), with alternating up/down strums on adjacent white keys and up/down mutes on adjacent black keys. Selecting the Bass Mode tab drops the tuning by an octave, extending the range down to a ridiculously low E — a fifth lower than a grand piano can go — which should delight even the darkest of souls.

The Single, Double and Quad tabs offer yet another departure from the standard MusicLab format. Heavy-metal guitar parts are often double-tracked, or even quadruple-tracked; RealEight allows this effect to be achieved in a single performance, using just one instance of the plug-in. Selecting any of these modes loads a new sample set (so switching isn’t instantaneous). Note that RealEight installs as three versions; RealEight, RealEight (4 Mono), and RealEight (4 Stereo); Quad Mode requires running either of the second two versions to work. The basic RealEight plug-in employs one stereo audio track, and can be used for both Single and Double modes; in Double mode, the doubled guitars are panned hard left and right. The ‘4 Mono’ version provides four mono audio tracks, so in Quad Mode each of the quadruple-tracked guitars goes to its own output, and is best suited (obviously) for mono amp simulator processing. ‘4 Stereo’ does likewise, but the audio outputs are stereo, so all your bi-amped amp sim programs and their stereo effects will behave as they should. Hooked up to four instances of Guitar Rig 5, each running stereo amp sims and panned evenly across the stereo field, the Quad sound is truly monumental.