Michael Williams began his audio career as a BBC technician in the early 1960s, but he is better known today for his teaching (mainly with French broadcasters) and the many papers he has presented to the AES on the science of stereo and multi-channel mic arrays. This is a subject area that has always absorbed me, and I became fascinated many years ago by Michael’s unique explorations into the relationships between the stereo recording angle of a mic array and the spacing and mutual angles of the microphones.

To give you an idea of what I’m talking about, check out his Stereophonic Zoom paper in the free-to-access www.microphone-data.com library. If that paper whets your appetite for more, you’ll be as delighted as I was to discover that three decades’ worth of Michael’s comprehensive research and investigations into stereo and multi-channel microphone arrays have been brought together and published as a brilliant reference work.

Although the text was originally conceived and written as one complete book, it was decided to split it into two volumes (of 168 and 238 pages, respectively) for publication, and while I picked up Volume 1 nearly five years ago at an AES convention (and found it extremely interesting and informative), I have only recently managed to acquire its partnering volume, as I hadn’t realised the books are now only available directly from the author. 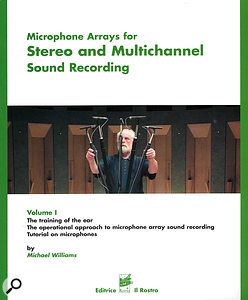 Volume 1 (ISBN 88-7365-073-2) is concerned mostly with the operational aspects of choosing and using microphones in general, as well as the basics of stereo and multi-channel microphone arrays. The table of contents seems to follow an odd order, but it works well in context, opening with a chapter on stereo and surround loudspeaker listening setups and their various strengths and weaknesses, as well as headphone listening. Chapter two jumps straight into explaining and analysing the common stereo recording arrays (X-Y, ORTF, NOS, DIN, AB and so on), as well as providing some ideas for simple but ingenious aids for selecting the mic arrays and aligning them optimally.

Chapter three is all about ear training, and learning to recognise the sonic characteristics and geometric distortions of arrays with different mutual angles, capsule spacings and polar patterns. A comprehensive range of practical experiments are described for the reader to work through to gain first-hand experience, first with two- and three-mic stereo arrays, and then launching into four- and five-channel surround arrays. Chapter four completes Volume 1, with an unexpected but important detour into the technical principles and practicalities of microphone capsules and their design. This chapter covers the material in rather more detail than most microphone technology books, and includes a useful section on the interpretation and comparison of microphone specifications. 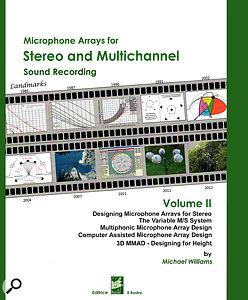 Volume 2 (ISBN 88-7365-104-8) concentrates mostly on the physical and psycho-acoustical principles of designing stereo and multi-channel arrays, and picks up the baton from the first volume by starting with chapter five. This examines the principal physics (and mathematics) that lie behind the calculations and designs of the stereo mic arrays which were reviewed in a practical sense in Chapter two. This section also includes some excellent work on the way reverberation is captured and portrayed, and the limits it imposes for different array solutions.

Chapter six again appears out of place at first. It explores the Mid/Side stereo system and the equivalent X-Y arrangements, achieved through decoding with various Mid polar patterns and Mid/Side ratios. However, as it’s impossible to apply the SRA diagrams directly to the M/S system, this intriguing system could only be explored logically after chapters two and five. This section highlights the various strengths and weaknesses of M/S stereo in an unusual but very thought-provoking way. The following chapter looks at the psycho-acoustical principles of multi-channel spaced mic arrays for surround applications, building on the principles explored in Chapter five, including an interesting examination of the effects of acoustic crosstalk and geometric distortions. It also explores the introduction of level and timing offsets between the mics, both physically and electronically, and rounds off by discussing some practical multi-channel microphone support systems.

The penultimate chapter discusses a custom software-based approach to designing mic arrays, and although the CD-ROM mentioned in the book hasn’t actually been launched yet, a useful web site covering some of this ground can be found at www.mmad.info. To close this second volume, chapter nine looks at the significance of height perception and the techniques associated with capturing and reproducing height information in multi-channel setups — something which is being promoted heavily in the latest sound reproduction systems.

Each volume of Microphone Arrays For Stereo & Multichannel Sound Recording is interesting and useful in isolation, but the whole is definitely greater than the sum of the parts and they should really be considered — and purchased — as a single work. Although not a light read by any stretch of the imagination, these books are well written and the concepts carefully explained and illustrated. It is clear from the practical hints and tips included throughout the text that this is not purely an academic work: Michael has evolved these techniques himself in practical recording situations, and everything discussed is directly relevant to real-world applications.

These two volumes explore an inherently complex and often misunderstood subject in an entirely different way from the standard tomes, and with far greater depth and detail than most. For anyone with a serious interest in comprehending the underlying science of microphone arrays, and revolutionising the way they think about and employ different techniques in real-world applications, this work is unparalleled and highly recommended. Hugh Robjohns

Volume 1 €20, Volume 2 €28. Prices exclude shipping. Copies can only be purchased directly from the author.

Volume 1 €20, Volume 2 €28. Prices exclude shipping. Copies can only be purchased directly from the author via Paypal.