While humans have a counting system based on their 10 digits, audio systems are more likely to be based on multiples of eight — which, of course, is a throwback to analogue tape days. We have audio interfaces with eight channels, mic preamps with eight channels and hardware recorders with eight, 16 or 24 tracks, so it makes sense that any general-purpose multicore 'snake' cables also come in multiples of eight balanced channels. 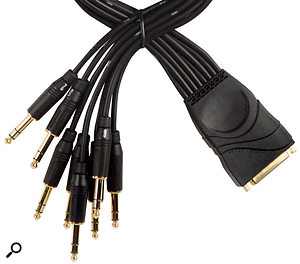 Many companies make multicore cables, but Planet Waves have come up with a simple modular system that covers most eventualities without the store needing to stock dozens of different configurations. Essentially, a typical snake cable from them will come in three parts: a central section available in a choice of lengths (5, 10, or 25 Feet) and a pair of end sections terminated in a choice of connector types. The centre cable is terminated in 25-way D-sub connectors (pins both ends), with mating 25-way connectors on one end of each of the end sections, and the wiring protocol follows the widely supported Tascam standard — which means that you'll be able to connect them directly to any unit that conforms to this standard. The cable itself is made from oxygen-free copper conductors with high quality shielding, and Amphenol gold-plated connectors are used to minimise contact corrosion problems.

Planet Waves offer seven component options, which give you 24 possible permutations. The end-section configurations shown on the company's web site (www.planetwaves.com) cover the obvious connector groups: eight quarter-inch jacks, eight male XLRs, eight female XLRs and AES/EBU with four male and four female XLRs. The set we had for review comprised a short centre section and two end sections, one with TRS balanced connectors and one with balanced XLRs. The 25-way connectors on the end section are designed so that eight separate cables fan out from them for easy connection, and the breakout cable length is about two feet. I was particularly impressed with the 25-way connector hardware, which provides very solid strain-relief, and although the jacks and XLRs are fairly standard, they are nicely soldered, with robust metal shells.

Of course, it is hard to judge the audio quality of a cable but these certainly didn't compromise the audio in any way I could hear, and their construction gives no cause for concern. As a sensibly-priced solution to eight-way cabling that is flexible enough to adapt when needs change, Planet Waves have come up with a very elegant concept that should prove popular.