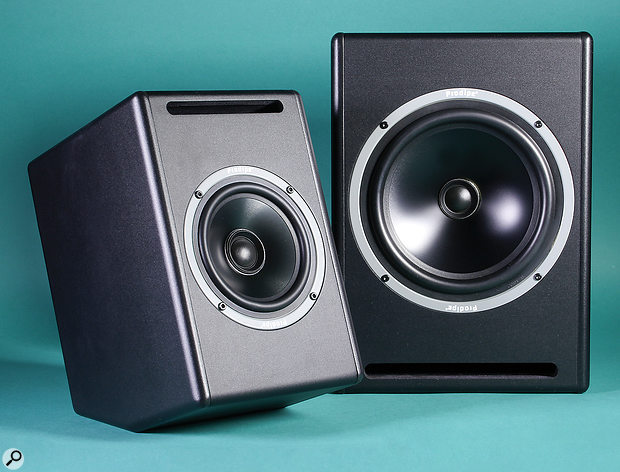 Coaxial monitors are usually expensive, so how do these budget offerings from French company Prodipe perform?

French company Prodipe continue to surprise us with affordable gear that performs rather better than its price might lead you to expect, so I was keen to try out their new coaxial studio monitors. Although Tannoy are probably the biggest name in coaxial monitoring, a number of other companies have developed variations on the theme.

In such designs, the tweeter sits in the centre of the woofer (where you'd normally see a dust cap), rather than above it or to the side. The main benefit that coaxial designs offer is that, as the tweeter and the woofer are in the same place, there are no phase penalties associated with listening off-axis. Such so-called 'point-source' speakers make a lot of sense — provided that no new problems are introduced through making the design coaxial.

Prodipe's design has no flare or waveguide for the tweeter (other than the woofer's own cone), so the horizontal and vertical directivity of the speakers is identical. This means that, unlike most monitors, these will perform as well on their sides as when placed vertically.

Made from MDF and finished in satin black, the TDC8s are two-way, nearfield monitors measuring 350 x 250 x 280mm and weighing 10kg. The top rear half of the cabinet is angled, which promotes rigidity and helps break up internal standing waves. It also means that you can invert the cabinet to have it angled slightly upwards — a practical option for desktop use. Audio connection is via balanced XLR or jack, or via an unbalanced RCA phono socket. The internal amplifiers provide 100W to drive the woofer and 40W to drive the tweeter.

A silk-domed tweeter handles the highs, with an eight-inch, black-finished, aluminium-cone woofer taking care of the mid-range and low end, the pairing giving a quoted frequency response of 40Hz to 20kHz (±3dB). Compensating magnets are fitted to both of the drivers, to reduce stray magnetic fields.

On the rear panel, there's a level control and switchable HF adjustment, with settings for -2dB, -1dB, 0dB or +1dB, to optimise the speakers for the studio environment and to suit the taste of the engineer, but there are no bass adjustment controls. Everything is neatly finished, with the driver recessed into the front baffle, which includes a slotted port at the bottom. The rear-panel placement of the blue power LED is a little unhelpful, but I can live with that.

If you need something a little smaller, the similarly designed TDC5 sports a 5.25-inch coaxial driver with an aluminium woofer cone and a silk-dome tweeter in the centre. As expected, the low end doesn't extend quite so far, with a frequency response of 60Hz to 20kHz (±3dB), but that's still adequate for many smaller studios. These have about half the amplifier power of their larger brothers, measure 274.8 x 181 x 210mm, and weigh 6kg each. The connection and control facilities are the same as for the TDC8. 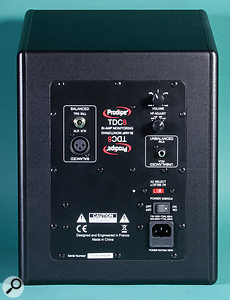 Both models have identical rear panels, including volume and HF adjustment controls.

I checked out both the TDC5s and the TDC8s on a wide range of material, and thought they actually turned in a very good performance for their price. Although they exhibit some of the inevitable shortcomings of budget speakers when compared with more sophisticated and costly monitors, within the budget section of the market, where these speakers are priced, they give a pretty good account of themselves.

The smaller TDC5s produce less deep low end than the TDC8s, which is exactly what you'd expect, though the performance throughout the rest of the frequency range actually seems better on the smaller monitors than on their larger siblings. The stereo imaging of the TDC5s felt more solid to me, too, the sound seeming a little more three-dimensional. Having a smaller bass driver helps here, as the two drivers don't have to strain too much to meet in the middle. The best way to describe the sonic improvement is to say that things feel a little better focused.

Turning to the TDC8s, I felt that the lows weren't as tight as they might be, and there was a slight lack of transient detail — though setting the HF control to its +1dB setting improves this slightly. As an experiment, I stuffed cloth into the bass ports of the TDC8s and, as expected, the bass tightened up, but there was also less low-end depth.

The combination of this low-end time smearing and reserved transient handling tends to produce a soundstage that lacks front-to-back perspective, but, if anything, their slight lack of focus makes you work harder on your mixes, which is usually a good thing, and in the mid-range, where all the important stuff happens, the TDC8s come over as well balanced.

For both the TDC5 and TDC8, the dual-concentric approach results in a very consistent off-axis performance, which means that you don't have to stay glued to the sweet spot to get good results. Both models have plenty of level in hand for nearfield use, too, and only start to sound boxy when pushed really hard.

Given their modest price, I was quite impressed with the TDC5 monitors, and in smaller rooms, where too much bass would risk provoking room problems, they should work really well. Overall, it seems that while some compromises have had to be made in order to meet the price point, Prodipe have, once again, come up with great-value products that punch above their weight and deserve to be auditioned if your budget is tight.

Although most low-cost speakers are conventional (non-coaxial) designs, the strongest competitors for these two models come from the likes of Alesis, Fostex, Tannoy and KRK.

Both these speakers offer a good balance of cost to performance but, for my money, the smaller TDC5 is the better sounding of the two, albeit with less bass extension.