The medieval crusades were a long-running series of military campaigns that took place in the Eastern Mediterranean region during the middle ages and involved people from many different countries and cultures. Medieval Crusades library represents that diversity by including a wide range of musical styles and instruments in its compositions. 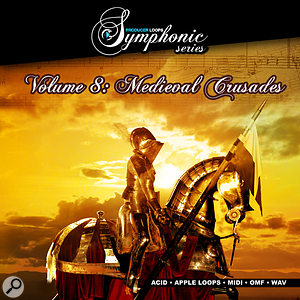 The 3.9GB of content is presented as five construction kits, each of which is a musical chapter in a story, apparently based on the adventures of a 12th-century Norwegian king called Sigurd!

Kit 1 is a grandiose introduction with full orchestration, intended to represent the king’s army. In contrast, the second kit is a slower piece called Promised Land, which includes vocals by Dutch singer Lieve Geuens. The third is a more aggressive percussion-driven battle sequence, itself followed by a softer strings-only piece representing the battle’s aftermath. The final kit is called Quest For Peace and features a vocal improvisation in Hindi.

Each kit has been broken down into useable WAV files which are named logically and intelligently so that it is clear what part they play in the overall composition. There are wet and dry versions of every WAV, and there’s a separate folder of MIDI files matching every WAV sequence so that users can assign their own instruments to phrases. The library also comes with five OMF (Open Media Framework) files, enabling the complete arrangement to be imported into a DAW, and for reference there are stereo WAV mixes of all five compositions.

No doubt some users will want to take sections of the compositions and adapt them, but many others will be looking to see if there are individual instrument parts that can be used in other contexts. I’m happy to say that there is plenty of material that could be looped to form the basis of a new composition, or dropped into a track somewhere to provide a touch of textural interest. There are certainly a few loops that wouldn’t be out of place in a composition by the nu-jazz/hip-hop band Fingathing, for example.

The range of instruments in the library is vast and includes violins, violas, cellos, double basses, piccolo, concert flute, clarinet, bass clarinet, oboe, bassoon, contra bassoon, trumpets, trombones, French horns, tuba, contra bass tuba, harp, piano, glockenspiel, timpanis, hand percussion, snare drum, concert bass drum, vocals and even choir and synthesizer pads parts. It’s unclear how the library’s producer and composer, Gregor Theelen, created them, but I suspect he has some high-end orchestral libraries at his disposal rather than a real orchestra. Either way, the quality is impressive and the licks are convincing.

It’s probably fair to say that most people who are looking for samples are not searching for medieval crusades-themed material, so this library is unlikely to make their wish list. Nevertheless, it offers a lot of content that could be used in other genres of music quite easily, and should not be overlooked by anyone. Tom Flint