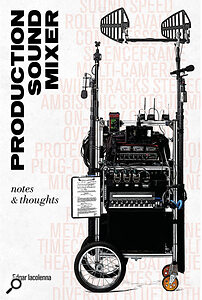 Informative books about audio careers in the film and TV industry are relatively rare but, oddly, I’ve come across two new publications in as many months! In SOS September 2022 I reviewed Patrushka Mierzwa’s excellent book, Behind the Sound Cart, describing building a career as a Utility Sound Technician (aka. Second Sound Assistant) in the film or TV industries. This month it’s the turn of Italian National Film School instructor Edgar Iacolenna’s self‑published book Production Sound Mixer (ISBN 978‑3‑033‑08992‑1), available via Amazon. This is a collection of transcribed interviews with seven of the world’s top film production sound mixers: Tod Maitland, Guntis Sics, Chris Munro, Pascal Armant, Stefano Campus, Nakul Kamte, and Patrick Becker. You may or may not be familiar with these names yet, but you will definitely have seen films recorded by most of these guys!

Each interview spans roughly 20‑25 pages of this 180‑page book, which is available in both paperback and Kindle formats, and they all broadly follow the same topics: career trajectories, advice they would offer to their juniors, creating the perfect sound team, key objectives in capturing on‑set sound, the daily joys and frustrations of the job, equipment choices and techniques, radio mic rigging and applications, on‑set practicalities and organisation including pre‑planning to deal with the unexpected, and relationships with the actors and other film departments, including post‑production.

The format throughout is informal and chatty and it rarely gets technical or nerdy, yet the conversations provide some truly fascinating insights into this often under‑represented role. As you might expect, the interviewee’s experiences and views are largely consistent, although there are some unexpected differences in approach too. And I had no idea that Dante had become such a popular technology in the film world! This really is a great read for anyone with an interest in the working life of a Hollywood production sound mixer.