V-Metal is an ultra-detailed, sampled virtual electric guitar instrument from Japanese company Prominy, whose equally detailed SC (Stratocaster) Electric Guitar instrument was reviewed in SOS February 2009. This time, Prominy take a more Gothic approach, having sampled an ESP Alexi Blacky with EMG Humbucker pickup, represented by a total of 26,000 samples; 12GB (19GB uncompressed) of data in all. As its moniker suggests, V-Metal's forte is dispensing dark and all-consuming death, realised, of course, in tandem with a suitably apocalyptic virtual amp setting. 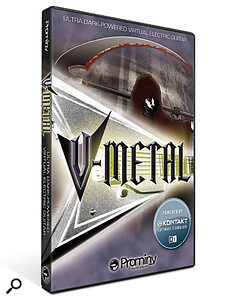 V-Metal requires Kontakt 5 or the Kontakt 5 player as its host. Like SC Electric Guitar, it is designed to allow highly realistic real-time performances, using a combination of keyswitches and key velocity to access numerous single-string articulations, pre-sampled chord shapes and intervals, and guitaristic effects. The full V-Metal Multi loads all articulations (29 of them), each being given its own dedicated instrument in Kontakt, and all responding to a common MIDI channel. String and fret-position selection are made automatically, but that can be overridden at any time by forcing string selection via keyswitches. V-Metal's default behaviour is monophonic, but polyphonic playing is also possible by pressing the sustain pedal. Articulations include legato slides, hammer-on and off, tremolo, trills, unison bends, harmonics, pinched harmonics, double bends, various chords and two-note intervals, octaves, powerchords, whammy bar effects, feedback and divebomb: pretty much everything you need to deliver the Last Judgement from behind a keyboard. Other niceties (should that be nasties?) include those essential palm mutes, picking noises, automatic up/down picking alternation and downward glissando pull-offs.

This level of detail in the full Multi comes at a cost: around 2GBs worth of RAM. If your PC is struggling with this, Prominy suggest lowering Kontakt's pre-load buffer size to reduce the amount of RAM used, which inevitably will make the DFD (direct from disk), and hence your hard drive, work much harder, and may or may not be a practical solution, depending on your particular computer and disk configuration. However, the good news is that a 'lite' version is provided, which packs most of V-Metal's abilities into a single Kontakt instrument, taking up just over half a gigabyte when Kontakt's pre-load buffer is at its default setting. The most significant sacrifice here is that you have to make do with entirely automatic string selection. And, since each string is not represented by its own 'instrument', this means that they cannot be individually edited either. Nevertheless, the results that are possible using the lite version are truly impressive, and would surely get a cheery thumbs-up from the Grim Reaper himself.

Double-tracking is a common recording technique for heavy metal guitar, and V-Metal comes with both 'full' and 'lite' double-tracking Multis that emulate this effect from a single live performance. The 'left' and 'right' instruments are pre-routed to Kontakt's first two stereo outputs. All you need is an amp sim for each output and to pan them accordingly, and away you go! V-Metal is a John Martin painting set to music — I never knew the End Of Days could be so much fun. Nick Magnus