The market for compact, active PA speakers is a crowded one, but RCF think there's room for one more... 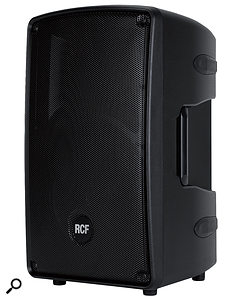 The new D-Line range of portable active speakers from Italian manufacturers RCF includes not only the expected two-way, full-range enclosures and subwoofers, but extends to active line-array modules too. Up for review this month, however, is the '12-inch plus horn' model, the HD12A. There's no shortage of competition in this sector, though, including from RCF themselves!

My first visual impressions of the HD12A were that it seemed very well made, and that the detail and finish are very good. Even lifting the first speaker out of its shipping box was easy, as there's a very large, rubber-backed steel handle set into the top, with another one on each side. These make the 16.7kg HD12A extremely easy to pick up and carry, whether it's on the floor or mounted on top of something.

The cabinet is made from a form of moulded composite polypropylene, and it has a smooth matte-black finish that is pleasing to look at. The hard surface feels tough, and it didn't pick up any scratches or scuffs over the review period. Overall, it has a classy and subdued look that would not be out of place in applications where the gear needs to be heard and not seen: for example corporate, AV or theatre events. The front panel is slightly convex in the vertical plane, which results in a strong, dent-resistant grille profile. The metal grille covers and protects the whole of the front surface and is well fitted. I put a fair amount of pressure on it with my hand and it didn't flex inwards at all. There's no backing cloth or foam behind it, though, which would provide just that little bit of extra protection.

The HD12A is equipped with a good-quality metal pole-mount socket on the bottom, and has four reasonably-sized rubber feet, which are sensibly-placed for stability. The pole socket doesn't have a clamp screw, but the poles and tripod stands I used all fitted firmly and were easy to remove afterwards.

The connections and control panel are simple and well laid out, with an XLR or jack input (both balanced), a level control, and a 'boost' switch, which activates an EQ curve for low-level background or replay material. The input sensitivity can be switched between line and microphone, allowing the HD12A to be used as a simple public address system with a microphone plugged directly into it. This input switch has a sensible design and can't easily be engaged accidentally, as it has a definite slide action and a clear printed legend alongside it. A balanced link-output XLR is provided for connection to another HD12A or other component, and a trio of indicator LEDs for power on, signal present and limiter activity complete the picture. The limiter LED actually functions as a simple diagnostic tool, and will, if there's a fault, flash a specific number of times upon power-up to indicate the severity (one or two times for warning, three or four times for impaired performance, and five to eight times for speaker failure).

The drivers are designed and made by RCF, and the HD12A uses a cast-frame woofer with a three-inch voice coil, and a small-format, one-inch-exit compression driver with a 1.7-inch diaphragm. Audio power is provided by dual Class-D amplifiers: 450W for the LF and 150W for the HF. The crossover point is 1.6kHz. The HD12A's onboard DSP takes care of crossover filtering, EQ, limiting and compression, and also provides the bass-boost function. 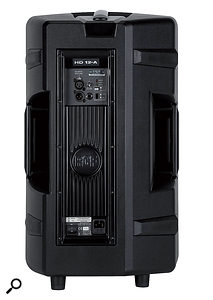 Just above the heat sink on the rear panel are the input and link output sockets, the mic/line sensitivity switch, the input-level knob, and a 'smile' EQ curve button.

I rigged up the HD12As in my workshop and played various test tracks and uncompressed studio recordings through them at varying levels. I like to get a feel for speakers by listening to familiar material in familiar surroundings, where I have the facility to compare with other familiar equipment, and my first impression was that the HD12As were going to score high on clarity, especially in the vocal region. From the first test, they exhibited a very pleasant top end that sounded solid and powerful without any noticeable harshness at higher levels, and the bass performance was impressive too. I solo'd various instruments from a multitrack recording, and there really wasn't anything I could criticise about the way the HD12As handled it all. There was a good, clean attack on acoustic guitar and various percussion instruments (solo toms, in particular, were very lively), and the speakers were always clear in the vocal range. The bass end didn't sound hyped, and the 'boost' switch added enough LF at lower levels for background/backing applications without sounding over the top. At slightly higher levels, the moulded enclosures seemed relatively free from vibrations, with nothing distracting coming from the back of the cabinets.

As a first live test, I used the HD12As on a local gig as main speakers for a rock covers band. The venue was a typical medium-sized village hall with an abundance of reflective surfaces, and not many humans during the first set. The RCFs performed well in these challenging surroundings, especially as the band were determined to put on an energetic, take-no-prisoners performance. I took away the impression that these speakers have plenty of power in reserve, and they handled my mix of three male vocals, guitar, keys and kit without breaking a sweat, or even becoming very warm after two hours of partying.

I next used the HD12As at a full rehearsal of a 20-piece 'easy listening' band with a female solo singer, and the HD12As were able to demonstrate their gentler side — but vocal clarity and warmth were still much in evidence.

I then took the RCFs along to a local theatre, where I was going to be spending a week in the orchestra pit conducting The Sound Of Music. I had already persuaded the sound guy to let me substitute the HD12As for his own speakers on front-of-house duties, and the production requirement was that they be unobtrusive in appearance and capable of handling all the stage vocals, plus the sound effects — in particular, several instances of loud thunder!

The HD12As were set up on their tripod stands at either side of the stage, about a foot or so forward of the curtain line, with enough space to add a couple of subs, should it prove necessary after trying out the thunder claps. I set out the stands and lights in the pit while some wireless mic issues were being resolved, then went up to the sound desk to listen while the individual mics were tested. Kev the sound man let me have a tweak around on the channels, and I found it very easy to achieve a nice stable, honk-free vocal sound on all the principal mics, with only a moderate cut around 800Hz and the obligatory LF roll-off below 100Hz in most cases. With a show of this nature, vocal clarity, above all else, is the name of the game, and the HD12A rig didn't disappoint. I was impressed with the consistency of output at modest as well as higher levels, and the HD12As performed just like they had back in the workshop.

We were fortunate enough to having some top-notch talent in the show, and I must admit to being worried about losing their natural voice quality once everyone was miked up. I rigged up a downstage wedge monitor, but after the dress rehearsal all the principals agreed that they didn't need it, other than for a piano cue feed, as they were perfectly happy with what they could hear on stage acoustically and what they could hear coming back from the front of house. From my conductor's desk in the pit, I could hear the HD12As quite clearly, even though I must have been on the extreme edge of their rated horizontal coverage. What was particularly pleasing was the natural sound of the vocals, which came across very clearly to all parts of the coverage area, and would, in my view, properly justify the use of the word 'transparent' to describe the results.

I'd expected the HD12As to do a good job on the vocals, but I didn't know how they would cope with the sound effects. In this stage version of The Sound Of Music, a huge thunderstorm builds around the lead-up to that old family favourite, 'The Lonely Goatherd', and involves the children running on after various bouts of thunder and lightning because they're scared of the noise, which therefore must sound properly convincing. I'm pleased to say that our thunderstorm effects sounded, and felt, extremely realistic played through the HD12As alone, and their low-end capability meant that we crossed subwoofers off the technical list as soon as we'd heard the thunder effects.

Throughout the run, the balance was just right and we received more than a few unsolicited compliments about how easy it was for the audience to hear all the words over a 15-strong orchestra. Even sound engineer Kev, who had been understandably reluctant to substitute something else for his usual speakers, was impressed enough to check out the price of the HD12As... I'm pretty sure I could have sold him the review pair by the end of the Sunday matinée!

The HD12As proved to be very practical, convenient and capable of very good performance. They are small enough to be unobtrusive where necessary, but have serious amounts of power available to cater for a wide range of small to medium applications — and they do it all very cleanly. They are well built and offer a lightweight, flexible solution to portable live-sound requirements. This is a crowded part of the live-sound marketplace, but these neat little RCFs would be well worth checking out.

There are many similarly specified models available, including the JBL PRX612M, Mackie's SRM450 and HD1221 models, the Yamaha DXR12, dB Technologies' Flexsys F12, the QSC K12, and Peavey's Impulse 12D.

A sturdy yet easily manageable speaker that delivers clarity and a surprising amount of power for such a compact design.

£918 per speaker including VAT.