Italian company RCF are famous for their PA systems, but they also make studio monitors. We put these compact speakers to the test. 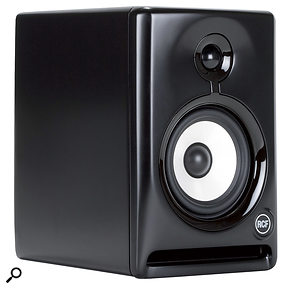 RCF have a solid and long‑established reputation for building PA systems and drivers, but now they're addressing the budget‑conscious home‑recording market with their Ayra range of studio monitors. Under review here is the Ayra 5, a conventional two‑way, active speaker based around a front‑ported MDF enclosure. Rounded corners reduce cabinet-edge diffraction, while the slotted port has been designed to minimise port distortion and air noise. RCF have given the cabinet an understated black finish, to make it attractive to studio owners as well as those wanting more serious desktop speakers for computer gaming or multimedia applications.

This relatively compact monitor has a five‑inch, composite‑fibreglass woofer paired with a one‑inch, soft‑dome tweeter. The on‑board Class‑AB amplifiers deliver up to 35 Watts to the woofer and 20 Watts to the tweeter, via an active crossover set at 2.1kHz. A frequency response of 55Hz to 20kHz is quoted, and the spec sheet even gives the vertical and horizontal coverage angles — 110 degrees horizontal and 70 degrees vertical. The maximum SPL of 106dB at one metre should be more than adequate for close‑up use.

To give you an idea of how compact these speakers are, their overall dimensions are only 274 x 186 x 266mm (HxWxD), but they still feel pretty substantial, at 6.2kg each.

As you'd expect, all the connections reside at the back of the cabinet. The input can be XLR, jack or RCA phono, and mains power comes in via the usual IEC socket. A soft limiter protects the drivers from excessive levels, and there's an HF adjustment knob (with a ‑2dB to +1dB range) to allow the high‑end tonality to be tweaked to suit the room and the operator's preference. The final control sets the monitor's input sensitivity. A fairly typical layout, then, but what really matters is how well these speakers perform within their price range. 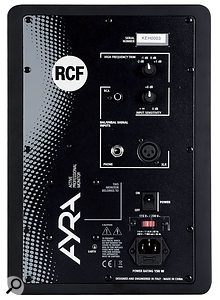 The Ayra 5's back panel, which hosts its balanced and unbalanced input sockets, and controls for setting the input gain and HF level.

Powering up the Ayras illuminated the RCF logos on the front of the speakers, and my first impression on audio playback was of a wonderfully smooth mid-range capable of delivering a realistic vocal sound, balanced by a nice sense of high-end detail, but without any abrasive tendencies. There is also adequate level for nearfield use but, as with any small speaker, the low‑end performance is something of a compromise, with bass notes and kick‑drum beats sounding a little smeared and less well‑defined than you'd expect from a bigger monitor. Placing the speakers on isolation platforms helps, but the real culprit is the degree to which the port resonance extends the low notes in an attempt to create a reasonable subjective level of bass from what is actually quite a small speaker. The result is that busy mixes tend to get a little congested, although the overall tonal balance and stereo imaging is pretty good, so if you can get your mix sounding good on these speakers, it will probably sound even tighter when allowed out into the real world.

Ultimately, any criticisms have to be balanced against the monitor's size and, of course, its price, which seems to be around £250 per pair 'on the street'. As an upgrade to typical multimedia speakers, the RCF Ayra 5s are a definite step up, and they're also well‑suited to smaller home studio setups. Their main strength is their smoothness in the mid-range and at the high end, while their weakness is shared by most small ported speakers, specifically a rather smeary low end that lacks a sense of tightness.

Summing up, the Ayra 5s deliver a creditable balance of performance and value, and once you get used to their sound, you should be able to create well‑balanced mixes on them.

If you're in the market for compact active monitors at this price point, the Fostex PM series and the established Alesis Monitor One MkII As are also worth checking out.