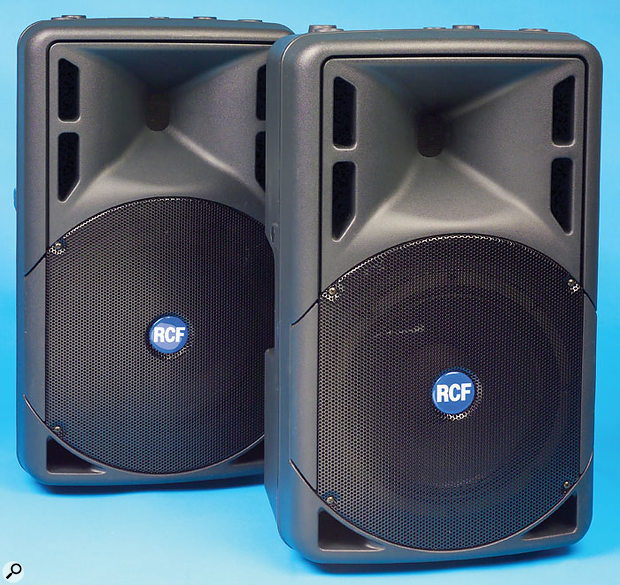 Italian company RCF have a good pedigree — for one thing, they helped design and manufacture for Mackie when the latter first entered the live sound market. We check out RCF's own entry in the portable powered PA stakes.

The Italian–based RCF loudspeaker manufacturers were bought by Mackie just before the latter moved into live sound equipment manufacturing. RCF then became involved in the design and manufacture of the popular Mackie SRM450 PA speaker. However, when Mackie restructured following its acquisition by Loud Technologies, RCF was cut loose, allowing it to market new products of its own design, and the model reviewed here seems to be a head–on competitor for the SRM450. RCF already have a reputation for building good–quality speakers in moulded cabinets, and their existing ART 300As (the ART line was started in 1996) are used extensively by hire companies around the world. The new ART series reviewed here comprises four models, two with 12–inch woofers and two with 15–inch woofers. There's little difference in maximum SPL between the four models: the lowest powered one has an SPL just 2dB below that of the highest rated. The reason why there are four models in the range but only two woofer sizes is that two variations per woofer size are available, offering one– or two–inch compression drivers at the high–frequency end. The models with the smaller tweeters also cut off at 50Hz at the low end, as against 45Hz for the two–inch models.

Physically, the cabinet is of a similar size as the Mackie SRM450s, delivering 400W of power with a maximum SPL of 128dB. However, RCF have developed new amplifiers and transducers, with the aim of delivering both quality and power without excessive weight (23kg), so there seems to be little in common with the Mackie product other than general shape and styling. Both rear corners are bevelled, to allow the cabinet to be used as a floor monitor at 45 degrees, and the bass ports are divided into six parts, four to either side of the horn and two in the bottom corners below the woofer. All vulnerable parts are recessed, including the rear panel and its controls.

The drivers both use Neodymium magnets, and the compression driver has a titanium diaphragm feeding a constant–directivity horn (fitted with a phase plug) producing 90–degree horizontal coverage and 60–degree vertical coverage. This is typical for a speaker of this size and is pretty much optimal for the type of venue in which these speakers are likely to be used, although it may be too wide for installations where multiple speakers need to be mounted in arrays. An edge–wound, copper–clad aluminium voice–coil drives the woofer cone, and large magnets are used on both drivers to ensure that they operate as linearly as possible at high power levels. A frequency response of 45Hz–20kHz is claimed, but with no limits specified (that is, how many dBs down the output is at these frequencies), the figure is of limited use.

As usual, separate amplifiers feed the two drivers, and these are themselves fed from an active crossover circuit, operating at 1.2kHz, that also incorporates low–cut filters to attenuate any frequencies lower than the speakers can comfortably handle. This is important with any ported design, as the cabinet loading on the rear of the driver ceases to be effective below the port's cutoff frequency, so there's nothing to prevent the speaker cone from moving too far on loud bass notes. In this model, a 350W Class–H amplifier powers the woofer, while a 50W Class–A/B amplifier powers the horn driver. The amplifiers themselves are documented as being monolithic, which suggests that they are designed around purpose–built all–in–one chips rather than being made from discrete components, and they employ a high–efficiency design that can handle short peaks around six times higher than their nominal rating. 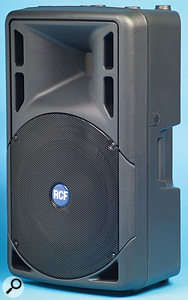 Side handles are ideally placed for easy lifting.Photo: Mark Ewing

Cooling is via a rear–panel convection heatsink, so no fans are needed, and amplifier protection is built in to guard against short–circuited speakers and DC offsets. DC–offset protection is important because if an amplifier fails and the output subsequently rises to one of the DC supply rails, as often happens in such cases, the speaker would fry very quickly.

The quality of a moulded cabinet can make or break the sound of the complete system, and it is clear that RCF have put in a lot of work to keep resonances in this cabinet to a bare minimum. A polypropylene material is used for the main moulding, with recessed handles top and side, as well as four captive nuts (hidden beneath blanking plugs) for the fitting of flying hardware. A pole recess with pole clamp is fitted into the bottom of the cabinet, and the woofer is protected by a powder–coated, perforated steel grille.

I checked out these speakers using full–range pre–recorded material, live vocals, DI'd acoustic guitar and live electric guitar. They work well either alone or in conjunction with a sub–woofer. I tried them with a Mackie 15–inch SWA1501 sub and experienced no problems. Unlike many systems that use titanium horns, the ART 322As have a relatively smooth high end, rather than being incisive and scratchy, but the sound is still detailed and clear. They handle vocals in a very neutral way with their EQ set flat (see 'Bringing Up The Rear' box for details of the built–in EQ), with better mid–range clarity than many plastic cabinet designs, and even the low–end response of the cabinets when used without a sub is acceptable at lower power levels. For vocals and guitars the range is fine, but if you need to mic kick drums or amplify bass instruments an active sub that filters out the low end feeding the main speakers is probably your best option. When the system is being used primarily for vocals, the Vocal EQ setting works well, giving more presence. The Music setting is fine where you want that 'loudness button' effect, but sounds too 'scooped' in the mid–range for my liking when vocals are a key part of the mix. At one venue, the speakers were working at close to their maximum level and the vocals were very loud, with surprisingly little in the way of feedback problems. Immediately after the set I checked the temperature of the rear panels and found them to be comfortably warm to the touch — not piping hot, as I'd feared.

Ergonomically, I like the packaging of these speakers, especially the positioning of the handles, which makes it easy to lift or carry them. They're also not too heavy. The locking screw that bears down on the mounting pole prevents the cabinet from rotating on its stand, and if you need to stack two cabinets on the floor, the feet of one fit snugly into moulded recesses on the top of the cabinet below.

While they're not the cheapest plastic speakers on the market, the ART 322As are by no means the most expensive either, yet their performance is up there with the best. A good wooden system would probably beat them, but then wooden cabinets also tend to be heavier. Though there is a matching RCF sub (the ART 705AS), I didn't get to try this, but — as explained earlier — the 322As worked fine with my Mackie SWA1501, which is of a similar size and power to the RCF model. The remote control option is more relevant to installations than to gigging bands, but you don't have to buy it if you don't need it. The fixed EQ settings are useful in specific applications, but I prefer to stick to 'flat' and then use the EQ on my mixer to get the right sound. Having said that, if you want a 'tizz and boom' disco sound, you can select the Music setting, and for announcement work or band vocals the Voice setting may offer some advantages.

To sum up, then, these RCF models combine portability and convenience with good sound quality and sensible pricing. Used in pairs, they're ideal in pub and club venues for handling vocals and instruments, and teamed with a suitable sub they're capable of impressive full-range results.

Bringing Up The Rear 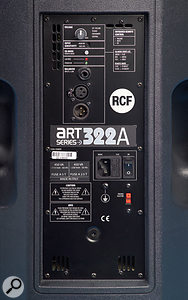 As well as the usual input connectors, mains power inlet and volume control, the rear panel hosts a switch for the speaker's three basic EQ modes.Photo: Mark EwingDoubling as a heatsink, the rear panel of the 322A plays host to the input connectors, the power socket and the volume control, as well as additional switches that require a little explanation. The input is on a balanced XLR (with hardwired male and female options to allow the daisy–chaining of cabinets) and there's also a standard jack that can accept balanced or unbalanced sources. This degree of choice means that you can connect either sex of XLR or any line–level jack and still get the system working, which can be useful when 'improvising' at non–standard gigs. A rotary control adjusts the input gain, but there's also a sensitivity switch that allows the user to select mic– or line–level inputs. Normally you'd feed in a line–level signal from a mixer, but if pushed you could simply plug in a dynamic mic to get up and running. There's no phantom power, so you can only really use dynamic or battery–powered electret mics direct into the speaker. A built–in limiter prevents the amplifiers from being driven into clipping (which, in turn, protects the speakers) and, as is invariably the case, the red clip–warning LED is on the rear panel where the band can see it but the sound engineer can't! A green LED on the rear panel shows that the speaker is powered up.

Many active PA speakers have switchable EQ options, and this one is no exception, but what is a little out of the ordinary is that you can buy an optional ART RC01 remote control to switch the level, mute and EQ modes via infra–red, if you feel that would be useful. While the gigging musican hauling a pair of these in and out of pubs may not need remote control, I can see many permanent installation situations where it would be desirable, especially when speakers are being 'flown' in inaccessible positions. For manual operation, the single rear–panel button can be used to step through the three EQ options, with EQ status denoted by the colour of the front baffle LED. When this LED is green the response is flat, which is how it leaves the factory. Red denotes a Music EQ 'smile curve' with top and bottom boost, while a yellow LED denotes an EQ with more of a presence character that is designed for optimum vocal intelligibility. This is all simple enough, but it means that you have to look at the front of the cabinet while your hand is around at the back pressing the button. Pressing and holding the button enters and exits remote–control mode.

Mains power comes in on a conventional IEC connector with adjacent switch and fuse, and there's also a recessed voltage–selector switch to allow 230V or 115V operation. If the unit is switched from 230V to 115V, the fuse value needs to be increased (presumably doubled) accordingly, though for some reason the manual states that this should be done by an authorised RCF service centre rather than by the user.

RCF have built a mid–priced plastic speaker system that performs as well as more expensive systems and also features a remote–control option. It is ideal for band vocals in small and medium venues, and in conjunction with a suitable sub it makes a convincing full–range system.

£750 per speaker including VAT.