Dutch samplists Project SAM won a lot of friends with their quartet of brass titles (SAM Horns, SAM Trombones, SAM Trumpets, and SAM Solo Sessions, reviewed in SOS February and June 2003, and March and October 2004 respectively). These libraries provide what most MIDI orchestral composers need: realistic, accurate, bright-sounding samples recorded from a choice of three listening perspectives, covering a wide range of dynamics and articulations. Project SAM repeat the winning formula in their new library — the same Utrecht concert hall and mic placements are used, but this time the source material is orchestral percussion.

True Strike 1 consists of a large menu of traditional and contemporary orchestral percussion instruments, both tuned and unpitched, supplemented by an array of Latin and effects percussion, metal sounds, and a few unremarkable 'body noises' (claps, finger snaps, and so on). In addition, there are effective unison hits from bass drum and timpani, bass drum and crash cymbals, and bass drum and tam tam. The library's tally of around 50 instruments makes it one of the most comprehensive orchestral percussion titles on the market.

Project SAM's percussive debut is available as a Gigastudio sound library or as a virtual instrument. The 16-bit Gigastudio 2 version is 12GB in size, while the 17.6GB Gigastudio 3 option offers the same samples in 24-bit form. The 24-bit instrument is powered by the Steinberg Halion Player, available as a full Professional model or a half-price Starter Edition — the latter omits ten instruments (including marimba), some effects performances, and two of the mic positions.

I used the Gigastudio 2 version to add stock orchestral percussion to a TV-music cue, and was immediately impressed by the low-end wallop of the timpani and bass drum, so much so that I began to fear for my speaker cones. In the 'far' miking, the hall ambience adds explosive force to these booming hits. At first I feared the piatti samples might prove less potent, but after wading through the obligatory batch of choked and semi-choked hits, I found the bright, triumphal cymbal splashes I was looking for. The library's layout is straightforward and logical, so finding the right sounds took only a few minutes.

Timpani single notes consist of two alternative sets of samples (a great help in making repeated notes sound lifelike), mapped two octaves apart to facilitate two-handed programming. These clean, resonant hits are supplemented by a sizeable menu of crescendo and diminuendo rolls of various lengths, glissando (ie. changing pitch) rolls, and looped tremolos. Medium beaters are used on the timps throughout, with hard beater hits adding a fortissimo bang to some programs. Project SAM uphold their reputation for loony experimentalism by playing an upside-down cymbal laid on a timpani skin while bending the drum's pitch with a pedal, creating some intriguing spooky effects.

Tom toms often end up sounding emasculated and out of place in orchestral libraries, but SAM's set of four are a knockout, performing strong, clean, melodic-sounding single hits, flams, rolls, and smartly executed multi-tom phrases. Sampled at six dynamic levels for maximum realism, the snare and side drums also sound good, covering all the common orchestral styles and throwing in some distinctly unclassical Bruford-esque whangy rim shots for good measure. Experimenting with the cracking three-player snare section samples, I was pleased to find that the three listening perspectives can be layered without introducing any obvious phase cancellation or flamming; adding the close-miked samples to the 'stage' and 'far' sets simply increases the attack definition.

The tuned percussion ranges from the sparkling high-frequency tones of glockenspiel, xylophone, and crotales (all superb), to the more mellow timbres of marimba and vibraphone. Although the latter pair sound splendid, both suffer from an awkward lurch in timbre between their softer strokes and the far brighter, more percussive loud hits — an intermediary mezzo forte dynamic layer would have helped bridge the gap. I was unhappy with the programming of the vibraphone's long notes; the samples ring on long after the key is released, making pianistic playing impossible. Let's hope Project SAM fix this in an update. The tuned percussion is completed by a pretty celeste (sounding most effective from the close-miked position) and some vintage, churchy tubular bells.

The producers have sampled small items like temple blocks, tambourines, and triangles in reasonable detail, resulting in unusual deliveries such as gradually accelerating woodblock rolls — believe it or not, quite a dramatic effect! Claves, castanets, vibraslap, and rattle are grouped together into one handy program with a few other bits and pieces including eighth-note sleigh-bell loops played at different tempos. Simply add a Noddy Holder sample, and there's next year's Curry's Christmas ad! Effects include entertaining scrap-metal and brake-drum hits, a less-than-thunderous thunder plate (imagine a metallic version of Rolf Harris' wobble board), some rather tame whip cracks, and a scary siren which had me cowering under the kitchen table waiting for the 'all clear'.

Latin percussion is a nice bonus, and although it's unusual to hear familiar pop sounds like shakers, guiro, bongos, and timbales recorded in such an ambient space, the hall reverb really suits the conga drums. The far east is represented by Chinese cymbals and tam tam, but other parts of the globe go largely unexplored — three deep-pitched Thai gongs, tuned to the notes of 'F', 'A', and 'C', are about as esoteric as this library gets.

There is very little dead wood in this percussion collection. Most of its sounds are highly usable, and immediately sound convincing in an arrangement without having to be tweaked. The instrumentation is less exotically varied and the performance options more limited than in the 30GB Vienna percussion set, but this title is cheaper! True Strike 1 hits the mark — its musicality, instrumental scope, and excellent concert-hall sound fully deserve a five-star rating. Dave Stewart 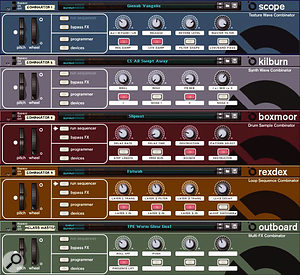 Lapjockey have been busy since their excellent Flatpack Refill was reviewed in SOS July 2003. The group have contributed material to Reason 3 's factory Refill, and their experience with the new Combinator device has resulted in two things: firstly, Flatpack 2 was restarted from scratch to include the Combinator; and, secondly, Flatpack 2 has become one of the first commercial releases to really focus on the device.

The numbers are good: 300 Combinator patches plus 200 NN19, 50 NNXT, 20 Redrum, 50 RV7000, and 20 Scream 4 patches, not to mention the further 200 REX loops and over 400 drum samples. All is easily accessible, and the user is encouraged to create, but most of us will sample the Combis first. In Flatpack 2, Combinator becomes the basis for five 'shells', each of which behaves as a sort of new mega-instrument complete with custom graphics and thoughtful use of assignable controls. Approach the Kilburn, Scope, Boxmoor, and Rexdex variants as if they were new Reason sound-making devices and I think you'll be jiving with the Lapjockey crew. The fifth shell, Outboard, features chains of vintage-feel send and insert effects.

Think synths, think Kilburn: raw synth-waveform samples from the team's favourites are loaded into devices that are wired up to emulate those same synths' signal paths — the patch abbreviations offer clues as to which instruments (CS, SH, Odyss, Source, and so on). The approach is actually rather successful, and manages to extend well beyond what I think of as Reason 's signature sound. If your synth and sample tastes are more impressionistic, load up the Scope Combis: this family is dedicated to textures, pads and soundscapes. Here you can really hear what Combinator is capable of, and the epic patch Gienah Vangelis sums up the approach admirably.

Drums are handled by Boxmoor. There are plenty of strange hits in the kits, plus distortion that's just the right side of sandpaper, for example in the Slipmat patch. If Boxmoor has a weakness, it's that its central device is Redrum — a novel approach to drums might have been attempted. But this is also the shell's strength: Redrum patterns from anywhere will be in shouting distance of compatibility. Now introduce yourself to Rexdex, which applies DJ-style control to loops in Reason. All the loops, produced by the Dr:Rex and Matrix devices, are nicely energetic and processed — just dig in.

Raw samples and programming are excellent throughout, and the Jockeys don't shy away from the unexpected: the set is sample heavy, of course, but NN19 is often used rather than NNXT with its heftier CPU load. Beyond the presets, 'initialised' patches for many of the shells let you programme from scratch — a rewarding process. Overall, the set seems like pretty good value, and a nice development of the Flatpack concept whilst being a great collection in its own right. Derek Johnson

This is another library from UK-based drum specialists Drumdrops, whose Fistful Of Drummers and Drops In The Bronx have both already received very favourable reviews in SOS. As with other titles in their range, this one is available in two formats; either a single DVD containing 16-bit mixed loops or, at a slightly higher price, a DVD set featuring 24-bit multi-track performances. In this case, the drumming is supplied by Style Scott (who has played with some high-profile reggae artists such as Gregory Isaacs and Barrington Levy), while some additional percussion comes courtesy of Norman Grant (Twinkle Brothers) and Tuca Rainbow. The playing is uniformly excellent and, in keeping with the Drumdrops ethos, the recording process is all analogue, including some classic spring reverb and echo units.

I explored the WAV files using Sony Acid Pro 5, and the standard stereo loop collection is organised into drum loops (400 — although some are duplicates with different processing), percussion loops (approximately 200) and a large collection of single hits and additional fills. All the loops are organised into tempo-based folders, ranging between 69bpm and 142bpm. In the case of the drum loops, each folder provides a useful collection of related loops, making it very easy to mix and match for song construction. The sound is also consistent enough between folders for easy combining. A mixture of (very) Dry, FX, and Dub versions of some loops are provided — with the latter having plenty of that classic Reggae-style ambience added! The percussion loops add some further variety, with hi-hat, shaker, tambourine, bongos, and scrapers amongst the instruments used. As with Fist Full Of Drummers, the multi-track version provides complete performances, some running to over four minutes. Each performance includes the kick, snare, hi-hat, tom, overhead, and room microphones. Drumdrops also provide Pro Tools, Logic and Cubase session files for each performance, and these include tempo maps to enable accurate quantising of any MIDI tracks added to the project.

Throughout, the character of the playing, the classic sound, and the very distinctive Reggae-based rhythms mean Drumdrops In Dub is certainly not just another 'me too!' drum-loop library. As a collection with its roots firmly in Reggae, this library might sound like it would have limited appeal. However dub influences can be heard in all sorts of different musical styles and I could certainly imagine these loops working in some hip-hop, trip-hop, or even rock (think The Police or some No Doubt material). The sound also has a very authentic '70s Jamaican vibe — very cool! While the stereo collection might seem a little pricey, if you like an extra degree of control the multi-track set is excellent value for money. John Walden