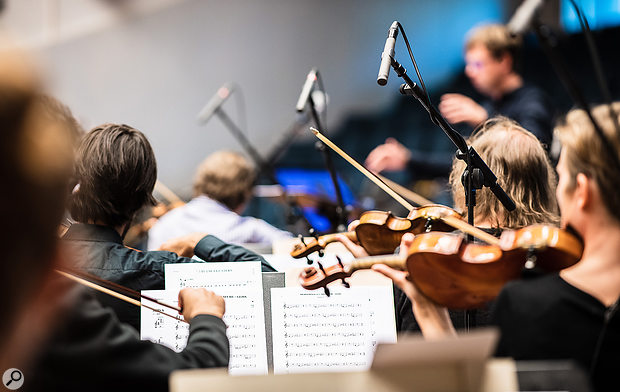 Despite being part of the orchestral sample library furniture for more than a decade, ProjectSAM's Symphobia titles still rank highly. The Utrecht-based company hit on a winning formula with this product range, details of which are shown in the box below.

The fourth instalment of the popular cinematic series is Symphobia 4: Pandora. As everyone knows, in Greek mythology Pandora opened a box releasing all the evils of humanity (arguably not her fault, it should have been properly labelled). While this did the poor woman's reputation no good at all, it does at least provide ProjectSAM with an apt title for a sample collection which purports to explore the dark side. To this end, Symphobia 4 (henceforth called S4) provides a big-sounding, dramatic set of orchestral risers, falls, pulses, clusters, effects, playable articulations and percussion in a 74GB package which runs on Kontakt and Kontakt Player 6.1 and up.

A major feature of S4 is its 'pulses'. Played staccato in quarter, eighth and 16th note sub-divisions (each of which has a triplet option) and sync'ed to your song tempo, these looped short-note repetitions generate an instant propulsive groove from one key press. Built-in light on-beat accents help impart forward momentum. The pulses have a great, tight feel, start positively and stay rock solid throughout, making them an ideal tool for cinematic rhythm underscoring.

A useful variant is the 'staccato crescendo' style, in which repeated short notes start quietly and grow in volume over two, four or six beats. The presets incorporate a separate region of single loud, staccato stabs corresponding to each pulse element, which you can use to add accents or create a climactic ending. In addition, pulses can be set to automatically trigger a staccato accent when you release a held note — in the review copy these note-off samples were terrifyingly loud, with no obvious way of reducing their volume. ProjectSAM ought to do something about that.

The brass and strings repetitions include an alternative 'Rise & Fright' snapshot which slowly rises in pitch over 12 bars or so, a great tension builder. A synth layer can be used to add an urgent electronic pulse to the string repetitions. The synth (which has three basic tones) has its own volume and low-pass filter controls but, frustratingly, you can't isolate it from the strings.

S4's pulses come in 'cluster' and 'tonal' varieties — the first are atonal cluster chords played respectively by brass, wind and strings, while the latter consists of single notes played by the strings only. The brass offers a choice of a French horns and trombones combo (a nice fat, rounded timbre for lower parts) muted trumpets (which sound pointed, cutting and energetic) and the broader, louder, triumphant tone of open trumpets. High-pitched pulses played by three flutes and a piccolo provide a delicate alternative.

While these brass and woodwind performances have much to offer, the strings' tonal pulses are likely to create the most excitement. The mid-range strings (unison violins and violas) play an excellent pulsating version of the common or garden spiccato style over an A#2 to E5 range, super-tight and motoring. Cellos and basses in octaves contribute terrific loud staccato accents, as powerful a low strings sonority as you'll hear anywhere.