The Polyend Preset offers a tantalising promise: presets in your modular. Its full title is 'Preset Recaller & Sequencer' and, whilst there is some truth in there, it's also a little misleading. What the Preset definitely is is a lot of fun. 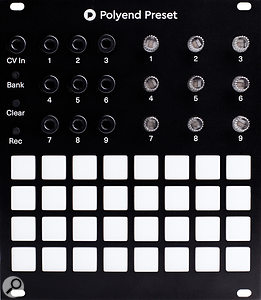 Polyend Preset: 22HP. +12V 170mA, -12V 11mA.The nature of modular synthesis means that preset recall, at least in the computerised sense we've all become used to, is impossible. There are dozens, if not hundreds of parameters in the average modular system, none of which are aware of each other or connected to a central 'brain' which can control them. The Preset introduces such a brain, albeit in a small way, allowing you to save and recall up to nine control voltages. These CVs can be stored in up to 1024 'presets' (32 banks of 32). Nine CVs is certainly not going to cover a whole modular setup, but it is enough to do some dramatic automation, or quickly recall particular modules for a live performance. Add to that sequencing of presets, recording of CV inputs and the ability to morph from one preset to another over time, and you have a very compelling module.

Packed into its black 22HP interface are 32 buttons for recalling banks and presets, nine CV output sockets, nine coloured clickable encoders for entering values, a single CV input and a few buttons for mode changing, copy/paste and other functions. Basic operation is delightfully easy. Select a bank and a preset using the buttons, then change the values of the nine CV outputs using the nine encoders. Each of the nine slots can work in one of three modes which you cycle around by clicking the encoder. The current mode is indicated by the colour of the encoder: dark blue for CV (0-10V), light blue for quantised chromatic CV (called Note mode) and green for Gate mode, which outputs a fixed-length gate when the preset is selected.

Entering values into the presets is done in one of three ways. By far the easiest is to simply turn the relevant encoder. The encoders are stepped and the values stored in the preset are stepped as well, although you can enter finer resolution by clicking and holding the encoder as you turn it. The second way is to hold the encoder down and then select a value using the 32 buttons. This is particularly useful in Note mode, where it's much easier to select specific notes by learning their position on the grid. The third method is recording CV from the CV input.

The Polyend Preset is an ingenious module which I think would liven up any modular system.

In CV mode, as well as storing a static control voltage value, you can also record up to 30 seconds of CV automation from either the CV input or the encoders. The manual suggests that you can use this feature to 'copy' your favourite LFO or envelope, which makes a lot of sense. I was surprised, therefore, and slightly disappointed, to discover that the recorded CV suffers from severe step quantisation. This is because the Preset isn't recording at audio rates, but at a far lower resolution. As a result, if you record a smooth sine-wave LFO, you will receive a steppy, quantised version back. To alleviate this, there is a smoothing option which applies some slew to outgoing CV, but this is global, so it affects all CV outputs at the same time, and the slew rate is fixed, so you're still unlikely to 'fix' the recording. I suppose it would have been too much to ask for 1024 slots of 30 seconds each at audio rates, but it is a shame that you don't get back what you recorded, and it makes Polyend's claim that you can copy your favourite envelope or LFO somewhat spurious.

Note mode allows you to output chromatically quantised CV. Outputs can be quantised to one of 32 different scales and, if you desire, you can detune notes to achieve microtonal tunings. Scale quantising is a global matter, which may be a problem for some.

One of the most satisfying uses for the Preset is to control several oscillators at once, with each oscillator being tuned by a different output. Programming different presets to different chords and then triggering them is great fun, but adding the Slew function takes this to a whole new level. Slew allows you to morph from one preset to another over a variable amount of time. Instead of chords snapping from one to the next, each note glides smoothly to the next. Of course, this needn't be chords, or oscillator pitches, it could be anything; wavetable settings, effect parameters, sequencer settings, you name it. The one perplexing aspect of Note mode is that you can only access a range of 32 notes, one for each button. There is no octave transposition, so playing melodies which span a wider range is impossible.

As well as recording CV, the single CV input can be used to sequence presets. Supply it with a clock pulse and switch to the appropriate CV input mode and you can step through presets. A sequence can be up to 32 presets long and always starts at the first preset of the current bank, increasing upwards until it reaches the sequence length, at which point it loops around. If you want to reset the sequence, you have to manually select a preset. It's a shame there isn't another CV input for this purpose, which would have been handy for getting other sequencers involved. The last CV input mode allows you use a continuous CV to select presets. You might, for example, use an LFO to cycle endlessly around the current bank of presets.

The Polyend Preset is an ingenious module which I think would liven up any modular system. The ability to quickly recall multiple CV values at the touch of a button isn't a new concept, but the Preset offers more memory locations than any alternative I can think of.

There are a few disappointing limitations, such as the low-resolution recording and the inability to access all notes in Note mode. The sequencing is quite basic, too. However, I prefer to look at these as bonus features. The basic concept of storing and recalling voltages is solid, and if you can live with the limitations I've mentioned, then the Preset will prove to be a useful module — particularly, I think, for those who like to perform live.